OPINIONS India can learn from China in fighting air pollution, experts agree, though it is easier to clear

India can learn from China in fighting air pollution, experts agree, though it is easier to clear 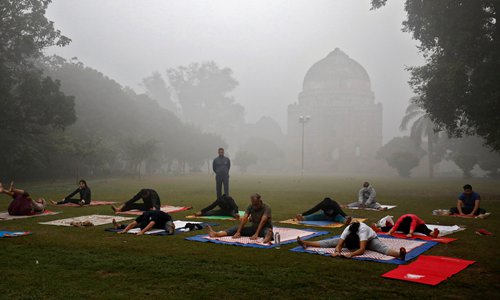 People exercise in a park on a smoggy morning in New Delhi, India, November 9. Photo: VCG

Arun, an Indian who had lived and worked in Guangzhou, South China's Guangdong Province, for six years before returning to India a few months ago, has found himself unaccustomed to the heavy smog of New Delhi.He posted photos on Chinese social media app WeChat showing the severe air pollution of his motherland, one comically featuring Superman wearing an oxygen mask "after flying through Delhi air for 10 min.""I used to hear that Guangzhou was also polluted, but never to this extent. It is entirely different here in Delhi," said Arun.In recent weeks, international media have been reporting on the lethal levels of pollution descending on New Delhi as winter sets in. Literally thousands of schools have been forced to close, while an ever-escalating surge of patients with respiratory problems are queuing up at local hospitals.The Indian capital officially declared a "pollution emergency," and responded by banning trucks and halting construction activities, but took no other immediate action.It was reported that the air pollution in New Delhi two weeks ago was 10 times worse than Beijing's at the same period. In fact, when comparing India with a relatively clearer China this winter, many global media have taken to throwing stones at the Indian government's dismissive attitude and casual management in controlling its dangerously high levels of particulate matter (PM). Western media also cited statistics showing the impressive achievements China has made in combating smog in order to get its AQI (air quality index) levels back down to breathable levels, using headlines like "India and China both struggle with deadly pollution, but only one is fighting it."As China's skies gradually become clearer following the central government's call to action, many Indian experts are calling on their own government to learn from China how to handle this potential catastrophe."China is already fighting pollution with countermeasures in various forms, so India has advantages in controlling pollution by learning from China," noted Varenyam Achal, an Indian professor of environmental engineering at East China Normal University in Shanghai.According to Ma Jun, director of the Institute of Public and Environmental Affairs, while India might learn something from China, India also has its own advantages and could solve the problem more easily and efficiently if the government would just make up its mind. "If learning from China, India needs to localize the experiences, like how China has learned from the West in the past 30 years. Now the most urgent thing is that India needs to raise its people's awareness about the impact of air pollution," said Ma.

Long-neglected problemAs the two most-populous countries in the world, China and India each have their share of environmental problems, including air pollution, while developing their economies. But when it comes to problem-solving, each culture has its own unique process.The Chinese government has, in just the past few years, made many notable efforts to tackle smog, including an across-the-board reduction in carbon emissions and the construction of a nationwide AQI detection system. It is reported that the level of PM2.5 in China has decreased by 10 percent over the past four years.As early as 2008, Beijing briefly instituted an "odd-even" license plate policy to curb vehicular emissions, and now the city implements a rotation policy banning every vehicle from the road one day per week; India's transport ministry, taking a cue from Beijing, eventually decided to introduce its own version of this policy.In China, it has also become a habit and even a fashion trend for local citizens to wear stylish face masks outside, purchase air filters for their homes and offices, and check the PM2.5 index with Chinese mobile apps upon waking up every morning. In India, meanwhile, most people do not bother to wear face masks, let alone buy personal air filtration systems.According to Ma, India's air pollution has become such a trending global topic because, on the one hand, China, which was also once notorious for smog, has made impressive achievements in limiting PM2.5, while India, which is experiencing rapid industrialization, has placed little if any emphasis on reducing its pollution."It is true that China goes further in urbanization and industrialization, but China started to address air pollution in 2013. India has not paid any due attention to it," noted Ma.

Economy before environmentIn 2010, Ma read in a research report that New Delhi's air pollution was worse than any city in China, but the report failed to arouse any attention among Indians."It might be related to the stage of development India currently is in. The awareness of Indian society in this regard is generally weak, which is quite like Chinese society 10 years ago, when the mainstream idea was also 'economy comes before environmental protection'," said Ma.Indian professor Achal came to China seven years ago. He still remembers the severe smog in many North China cities in 2013. "[The pollution] prompted the Chinese government to move forward with a number of new environmental policies, laws and action plans at national and regional levels, mostly starting from June 2013," Achal told the Global Times."Pollution prevention is often prioritized under the 'Five-Year Plan' of the Chinese government, showing how serious the government is about curbing pollution. You won't find such specific action plans to control pollution in India," he said.China is often cited as an example for India to learn from. Among the most-praised reasons, the role the government has played."It is a great advantage for China that the government could play a leading role in addressing the pollution problem, which compelled society to gradually join in," said Ma.In contrast, Achal pointed out that India's government has halted appropriate pollution prevention strategies from taking effect."Being a democratic country, there are many political parties in India. Opposition parties means they must oppose everything the government proposes. Sometimes the government proposes sustainable laws to curb environmental pollution; however, it doesn't get support of the opposition parties," explained Achal."Too much democracy sometimes kills environmental development, and India suffers from this," Achal concluded.Indian advantagesThe Modi administration has prohibited hay burning - a primary source of pollution every winter - in four states. But the order has not been widely implemented for various reasons. Even previous measures closing some polluting factories were not well carried out.Ma recently returned from a visiting program at Chicago University, which cooperates with India in pushing Indian enterprises to publicize their information related to pollution. To date, the program has only managed to persuade 200 enterprises in one state to agree. Meanwhile, in China, thousands of enterprises in iron, cement and electricity are required to publicize their statistics online at all times.But Ma said that India has its own unique advantages. The energy structure of China is much more complicated than India, with much more consumption of coal and larger volumes of industrial waste. The source of pollution in India is simpler, which means it will be much easier for India to control the pollution problem if the Indian government really places an emphasis on doing so, said Ma.India also has much more "elasticity" than China in encouraging nongovernmental organizations and individuals to contribute by protesting their government into taking proper measures, according to Ma.Public awarenessThe year 2013 was a key point for China in enacting air pollution measures. As thick, dangerous levels of smog blanketed many cities across the nation, including and especially Beijing, the government and the public both finally admitted to the severity of the problem."Besides efforts in controlling the sources of pollution, large-scale publicity to disseminate information were carried out, including publicizing air quality levels and publicly exposing pollution sources," said Ma, adding that the public's "strong awareness" played a key role in pushing for change. "But in India, people do not show enough concern yet, due to their lack of knowledge," Ma said. "If there is something India can learn from China, it is raising public awareness."Achal agreed, pointing out that, besides the government, the Indian people themselves are also to blame for the laxity in controlling their country's pollution. "The majority of Indians are not willing to accept that the country is already heavily polluted. Just imagine why, in this 21st century, a prime minister himself must sweep a road with a broom just to send a message about 'Clean India'," Achal said."The government alone can't curb the pollution without complete involvement and support from the public," Achal added. "The support in China from the public has been enormous."Having recently returned to India, Arun observed that poverty, illiteracy, religious beliefs, age-old values and even superstitions are all affecting many Indian people's awareness about environmental protection and air pollution. "Indian society should cooperate with its government and in fact shouldn't hesitate to suggest the government enact harsh rules or legislative actions for environmental issues," said Achal, who personally has been active by publishing articles about this issue."When the people's awareness has been raised, they will push the government to do something. Probably only in this way will the Indian government put air pollution on its agenda," suggested Ma.