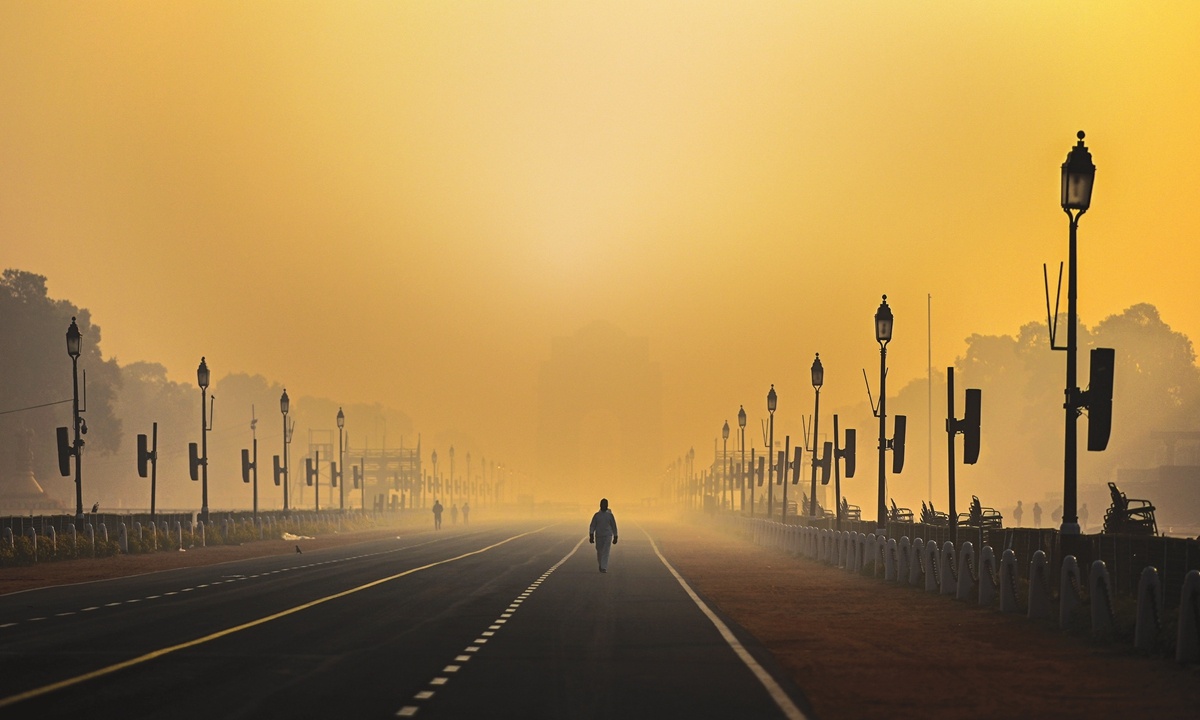 A man walks along Rajpath in smog in New Delhi on Thursday. The capital city of India continued to experience dense fog on Thursday with air quality in the "very poor" category and visibility in some areas at merely 200 meters. (Photo: AFP)

There are some key diplomatic engagements between Europe and India planned for this month and later this year. Several senior European officials, including British Prime Minister Boris Johnson and French Foreign Minister Jean-Yves Le Drian, are scheduled to visit India to pursue a so-called Indo-Pacific strategy. The EU is also reportedly aiming to hold a summit with India.

Against the backdrop of the US' intensifying efforts to pit allies against China through diplomatic pressure and ill-intentioned initiatives such as its Indo-Pacific strategy, Europe's upcoming engagement with India has gained much attention, with some even hyping up India's economic potential and claiming that the nation is the preferred new partner in Asia that will help the continent to cut its reliance on China.

However, if European politicians are pinning their hope of supply chain diversification on India, as some Western media outlets suggested, they are in for a big disappointment.

While India, with a population of nearly 1.3 billion, may appear to have the potential to be the next factory of the world, it has not and will not become an important participant in the global supply chain, let alone replacing China, as long as it remains burdened by a backward industrial foundation and over-protectionism.

In fact, the Modi administration has already been trying to replace China's role in the global manufacturing sector with various reforms and efforts to create favorable conditions to make it easier for foreign investors to set up factories in India. However, despite the government's efforts, India still faces insurmountable obstacles to become a manufacturing power.

Poor infrastructure, a complicated regulatory environment and economic nationalism are the main reasons behind India's failure to boost its manufacturing sector and industrial development. In particular, India, which has long been considered as one of the world's most protectionist countries, still relies heavily on hefty tariffs and various trade barriers to protect its fragile domestic industries from global competition.

For instance, smart phone makers would find it difficult to set a foothold in the local market without setting up an assembly line there. But not all companies, particularly Europe's numerous small- and medium-sized firms, can afford to establish their own manufacturing capacity in India. And for big corporations that can open factories there, there are still huge risks. Last year, an Apple iPhone manufacturing plant in southern India was trashed during a violent riot, leading to millions of dollars in damage.

Global businesses are well aware of these challenges and risks of doing business in India. This may also explain why many from the European business community are not so optimistic about the economic opportunities under the so-called Indo-Pacific Strategy, even though the EU and India may announce certain progress regarding negotiations over their trade and investment agreement during the EU-India summit in Portugal in May. Some in the European business community have already warned of potential disappointment in betting on India as a replacement for China.

By comparison, the European business community has a higher expectation for their cooperation with China and looks forward to the great opportunities from the implementation of the EU-China Comprehensive Agreement on Investment.

It is understandable and should be encouraged that countries and regions seek economic cooperation, however, if such efforts are aimed at containing a third party through geopolitically-charged strategies, they are nothing more than political stunts that are doomed to fail.

The bottom line is that except for its population being on par with China, India still has a long way to go to become a manufacturing powerhouse and a consumer market that can actually compete with China.