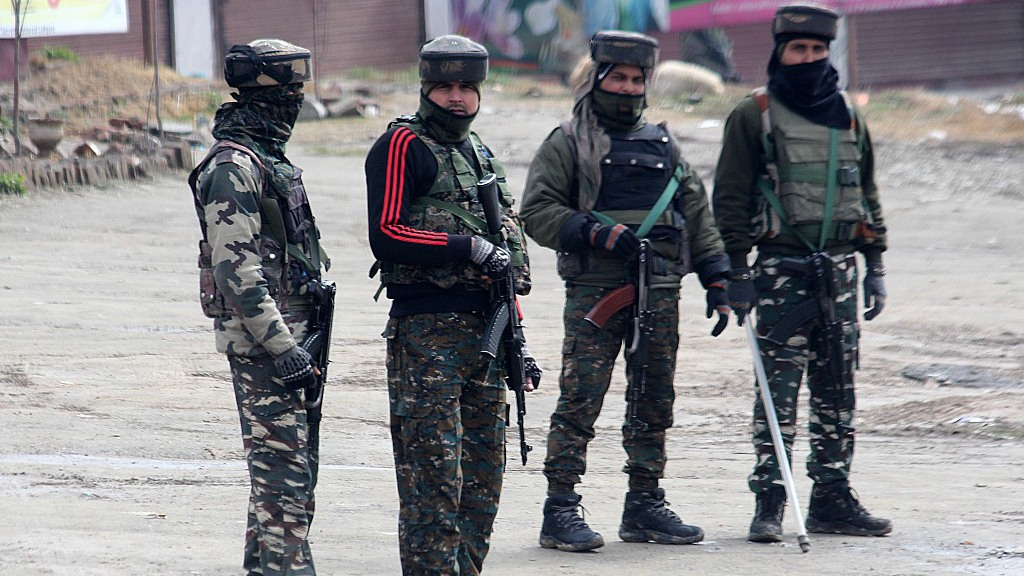 Indian paramilitary troops are seen near the wreckage of a bus that was destroyed in a suicide attack on February 14 in the Lethpora area on the outskirts of Srinagar, Kashmir, February 15, 2019.  (Photo/VCG)

It was the traditional festival of Valentine's Day on February 14 in Western countries. Almost the whole world was celebrating the festival and people expressed their love for each other. However, on that day in Indian-controlled Kashmir, at least 45 people were killed in a serious terrorist attack, and the families who had lost their loved ones were deeply grieved.

According to India Today's website, on the afternoon of February 14, a convoy of the Indian paramilitary force "Central Reserve Police" was attacked by terrorists on a highway in Indian-controlled Kashmir, killing at least 44 policemen and injuring dozens of others. Some Indian security analysts have said the attack is the deadliest in the history of Kashmir militancy since 1989. The extremist group Jaish-e-Mohammed has declared responsibility for the attack.

Kashmir lies in the northwest of the South Asian subcontinent, bordering China to the east, Pakistan to the west, India to the south and Afghanistan to the north. At present, the southern part of the region is under Indian jurisdiction and the northern part is under Pakistani jurisdiction. Both countries claim sovereignty over Kashmir. The dispute has been left unresolved since 1947 after the Partition of India.

Mainly due to the Kashmir dispute, India and Pakistan, the two major countries in the South Asian subcontinent, have been in a hostile state for more than 70 years since independence, and have fought three wars. After the war in Afghanistan launched by the United States in 2001, the terrorism issue has become more prominent in South Asia. Terrorist attacks occurred from time to time in India and Pakistan. Almost every time a terrorist attack happened, the two countries accused each other of planning the "proxy war."

On December 13, 2001, the Indian Parliament House was attacked by terrorists, resulting in at least 12 deaths. After the terrorist attack, the Indian government and state administrations all entered the highest state of alert. India accused Pakistan of planning the terrorist attack, and the Indian army quickly assembled on the Indian-Pakistani border areas. Pakistan also launched all-round measures to respond to a possible war. On both sides of the border, relations between India and Pakistan were unprecedentedly tense and the war seemed imminent.

On May 14 of the following year, Islamic militants attacked Indian barracks in Indian-controlled Kashmir, killing at least 23 people. As a result, unprecedented tensions between India and Pakistan further escalated. At that time, intelligence agencies of many countries believed that the fourth Indian-Pakistani war was inevitable.

This time, the Indian "Central Reserve Police" convoy was attacked by terrorists in Indian-controlled Kashmir, causing extremely serious casualties. Jaish-e-Mohammed, who claimed responsibility for the attack, is said to be a Pakistani militant group active in Indian-controlled Kashmir. Jaish-e-Mohammed says that as long as India continues to garrison troops in Kashmir, they will continue to launch attacks.

On Thursday, Indian Finance Minister Arun Jaitley said that India would “take all possible diplomatic steps” to isolate Pakistan from the international community. The Indian government accused Islamabad of allowing a terrorist group to operate on its soil, but Islamabad rejected the charge.

But although extremism and terrorism might partly be a result of regional conflicts, on such a grave matter, joint efforts seem more practical than blaming.

Objectively speaking, the extremist and terrorist organizations in both India and Pakistan are the common enemies of the two countries, as well as for the South Asian subcontinent and the whole world. The incessant accusation of each other on the issue of terrorism will not help to solve the problem. Only when India and Pakistan work together to deal with the threat of terrorism and take concerted actions to combat terrorism can they contribute to the social stability and economic development of their respective countries.