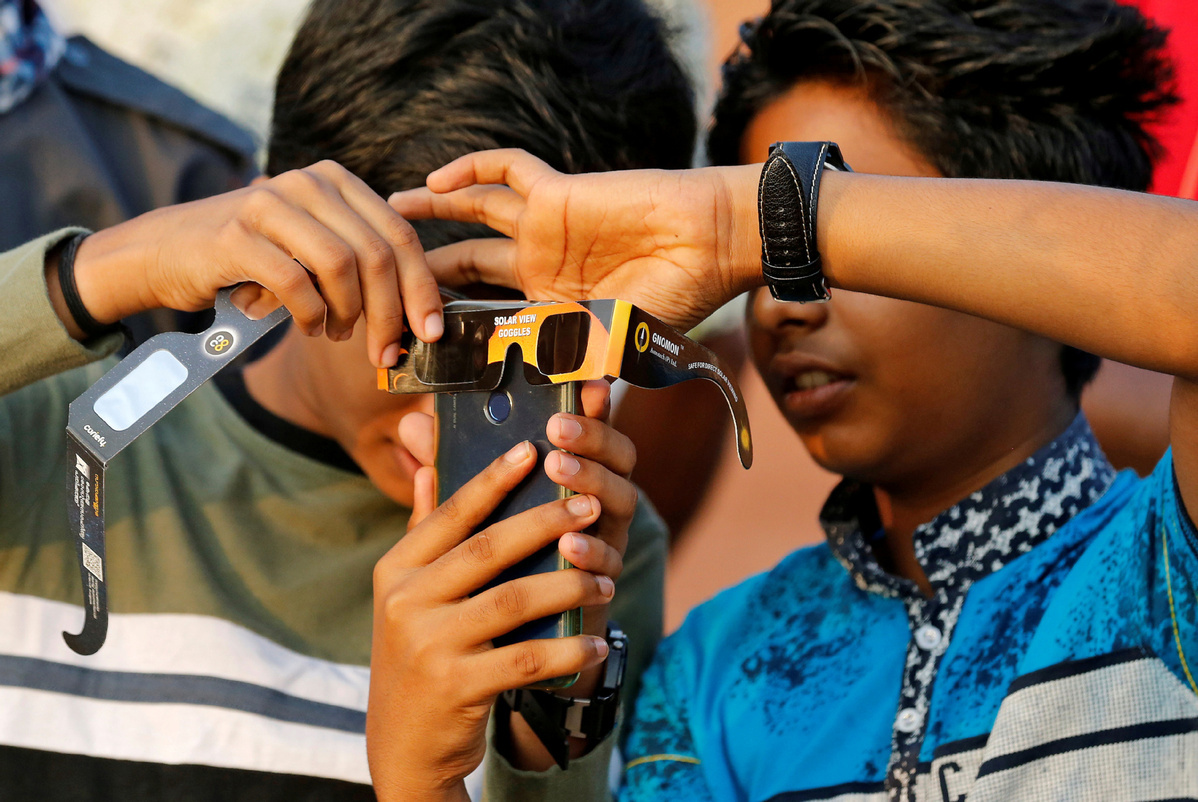 Boys use their mobile phone and solar viewers to take photographs of annular solar eclipse in Cheruvathur town in the southern state of Kerala, India, Dec 26, 2019. (Photo: Agencies)

India authorized trials of 5G wireless technology on Tuesday, in which it has invited foreign telecommunications equipment providers to participate, with the notable exceptions of the Chinese companies Huawei and ZTE.

The decision, which accedes to Washington's will, definitely damages the Indian government's credibility because it had earlier given the green light to the two Chinese enterprises to participate in the trials.

However, the change of heart is not totally surprising given that India has already banned dozens of Chinese apps, including TikTok, WeChat, and Tencent's hit game PUBG Mobile, among other restrictive measures it took targeting Chinese businesses and exports following the deadly border clash in June last year, and given that New Delhi has been cozying up to Washington as India's ties with China have frayed.

The exclusion of the Chinese telecom companies from the trials is particularly unfair given the fact that for years they have provided many job opportunities and contributed greatly to India's telecommunications infrastructure construction. That the Indian smartphone market is currently dominated by Chinese companies such as Xiaomi and Vivo points to the close economic and trade links between the two countries in the telecom sector.

The shortsighted move "is not conducive to the innovation and development of related industries", as spokesperson for the Chinese embassy to India Wang Xiaojian said.

Moreover, as India's 4G networks already rely heavily on Chinese equipment, experts have calculated that excluding Huawei and ZTE may increase the cost of upgrading to 5G networks by up to 35 percent. This is obviously not in the interests of a country whose economy has contracted sharply as it struggles to contain the novel coronavirus.

Not to mention that excluding Chinese companies with cutting-edge technology from the trials will further delay the rollout of 5G in India, which already lags far behind many countries such as China, Japan and the Republic of Korea.

China treasures its friendship with India, and it has been among the first group of nations to offer emergency medical aid to the country after its pandemic situation worsened in April with the emergence of new variants of the virus. China is also India's largest trading partner, with bilateral trade registering a year-on-year increase of more than 42 percent in the first quarter.

New Delhi should return to rationality by taking action to mend its ties with its neighbor, rather than let ties be hijacked by the anti-China sentiment the hawks in New Delhi have been fueling.