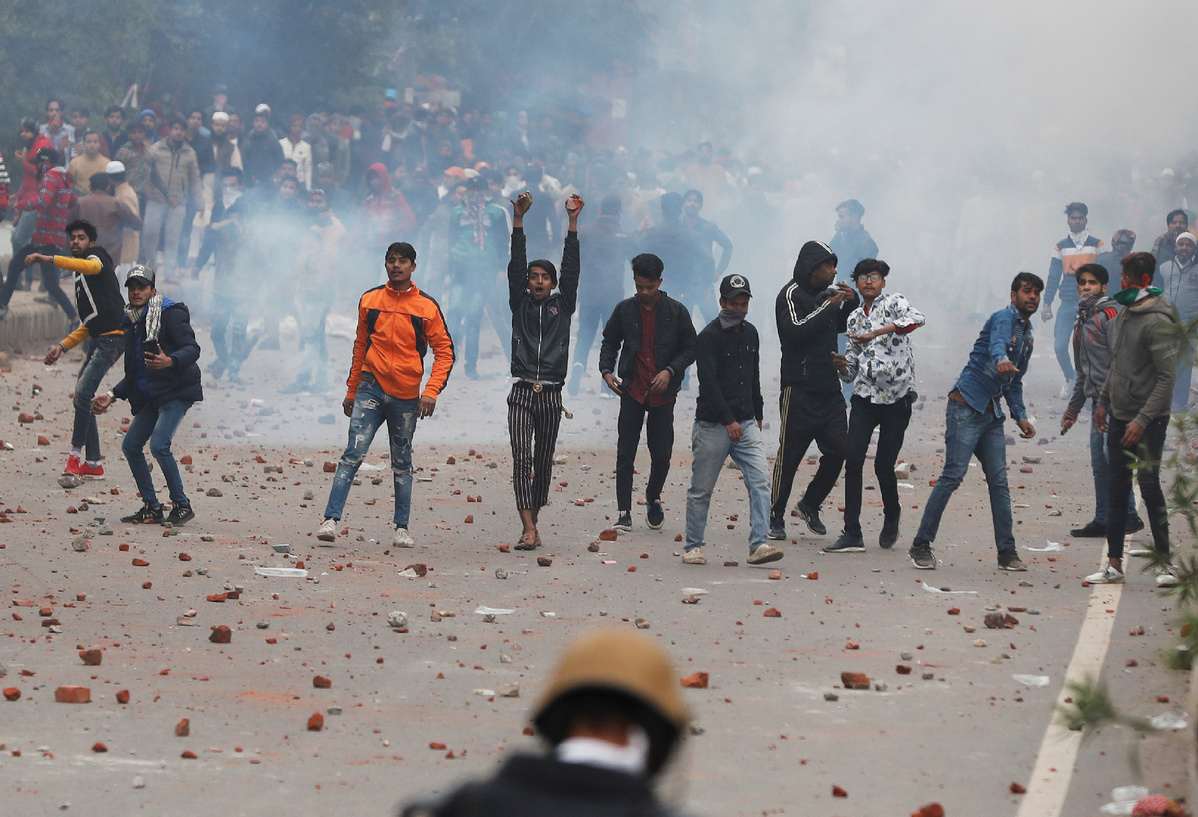 Demonstrators throw stones towards police during a protest against a new citizenship law in Seelampur area of Delhi, India Dec 17, 2019. (Photo: Agencies)

Protests have erupted nationwide in India as people express their opposition to a new citizenship law that critics fear could disenfranchise millions of Muslims in the country. Police fired tear gas at protesters in New Delhi on Tuesday, and in the northeastern state of Assam, the epicenter of the demonstrations, at least six people have reportedly died and more than 100 people have been injured in clashes.

The Citizenship Amendment Act, which fast-tracks citizenship for non-Muslim migrants from neighboring countries, aims to rid India of "infiltrators", according to New Delhi. Indian Prime Minister Narendra Modi hailed it as being "1,000 percent correct".

But critics of the government said that it could further marginalize the country's 200 million Muslims. They've pointed to the fact that the earlier citizenship list finalized in Assam left off 1.9 million people, a lot of them Muslims, who now, unable to claim citizenship, face possible statelessness, detention camps and even deportation, amid reports that India is building detention centers for the tens of thousands of people who the courts are expected to ultimately determine have entered the country illegally.

The issue has even drawn international attention, with the UN human rights office expressing concerns that the act "would appear to undermine the commitment to equality before the law enshrined in India's constitution".

Yet surprisingly, there has so far been little, if not no response at all from the self-claimed human rights guardians in the West in regard to what is happening in Assam. The reluctance to even give New Delhi a rap on the wrist over an issue that they would readily be decrying as being against human rights if it was happening elsewhere reveals once again the West's double standard.

Just imagine how fiercely they would have responded if a similar law targeting a specific ethnic or religious group were passed in China. The vocational training centers the government has built in Xinjiang — aimed at teaching ethnic Uygur people Mandarin and job skills as part of the efforts to eliminate terrorism and extremism — have already been subject to vilification by some in the West who label them detention camps and part of China's "repression of Muslims".

US Secretary of State Mike Pompeo on Tuesday again criticized China for "its gross human rights violations perpetrated against Uygurs and other religious faiths" as he came out in support of Arsenal player Mesut Özil, who last week in social media posts called Uygurs "warriors who resist persecution".

But then, in the eyes of the West, India remains the world's largest democracy and shares the same values with the West. China, on the other hand, is an "undemocratic" country and therefore anything it does is fair target for defamation and denigration.