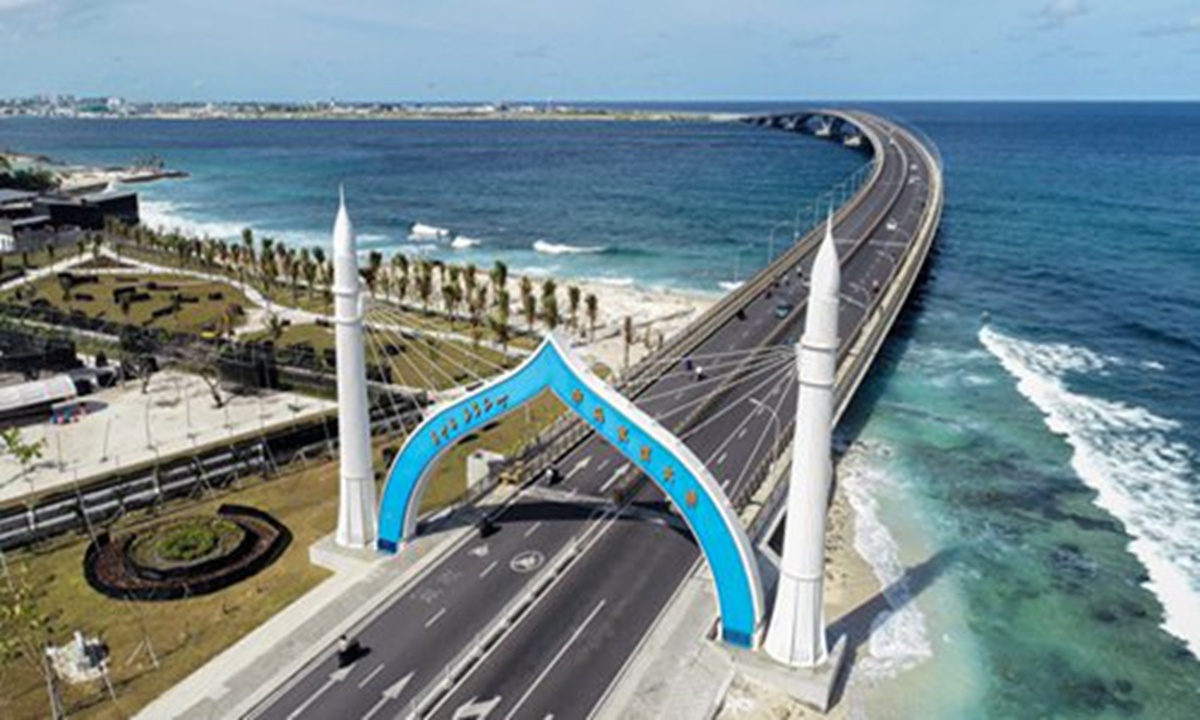 An aeriel view of the China-Maldives Friendship Bridge linking the Maldivian capital of Male with neighboring island Hulhule (Photo: Xinhua)

India on Sunday announced a $250 million loan to the Maldives to boost its coronavirus-battered economy. The loan reportedly followed a $500 million pledge by New Delhi in August to help build infrastructure in the island nation, which took India's total pledged financial assistance in the Maldives to over $2 billion since Maldivian President Ibrahim Mohamed Solih was sworn into office in 2018.

While the implementation of India's financial assistance commitment to the Maldives remains in question, some media outlets have associated India's assistance with its relationship with China, saying India's loan is a further bid to counter China's growing financial footprint in South Asia.

As gloom darkens over the global economy amid the COVID-19 pandemic, China has been providing medical assistance to countries and actively working with those whose debt and financial sustainability has been affected. It has collaborated to create a plan for these economies to endure the pandemic rather than pushing for repayment.

Chinese Ambassador to the Maldives Zhang Lizhong said in a tweet on Monday that in addition to the Chinese government's commitment to the G20 debt suspension initiative for bilateral sovereign loans, a discussion on commercial loan suspension requested by the Maldives is underway.

Similarly, it's believed that the main purpose of India's commitment of financial assistance to the Maldives is to promote the development of the Maldives and help the Maldives economy endure the difficulties of the pandemic, rather than being for geopolitical purposes or to counter China's financial footprint as some media have suggested.

This is because it would be a fairly bad plan to count on the Maldives - an independent country, to be involved in other countries' geopolitical games in return for financial assistance. As a sovereign country, the Maldives has the right to develop mutually beneficial and friendly cooperation with all countries. In other words, no country has the right to demand exclusive economic cooperation with it.

Even if India does have implicit political motives for offering financial assistance to the Maldives, the Maldives will not be involved in the geopolitical games as some foreign media like to believe. India, whose economy has been severely hammered by the pandemic with many regions in dire need of financial assistance, will find itself disappointed if its carefully calculated "plan" goes up in smoke.

The article was compiled based on an interview with Long Xingchun, president of the Chengdu Institute of World Affairs.