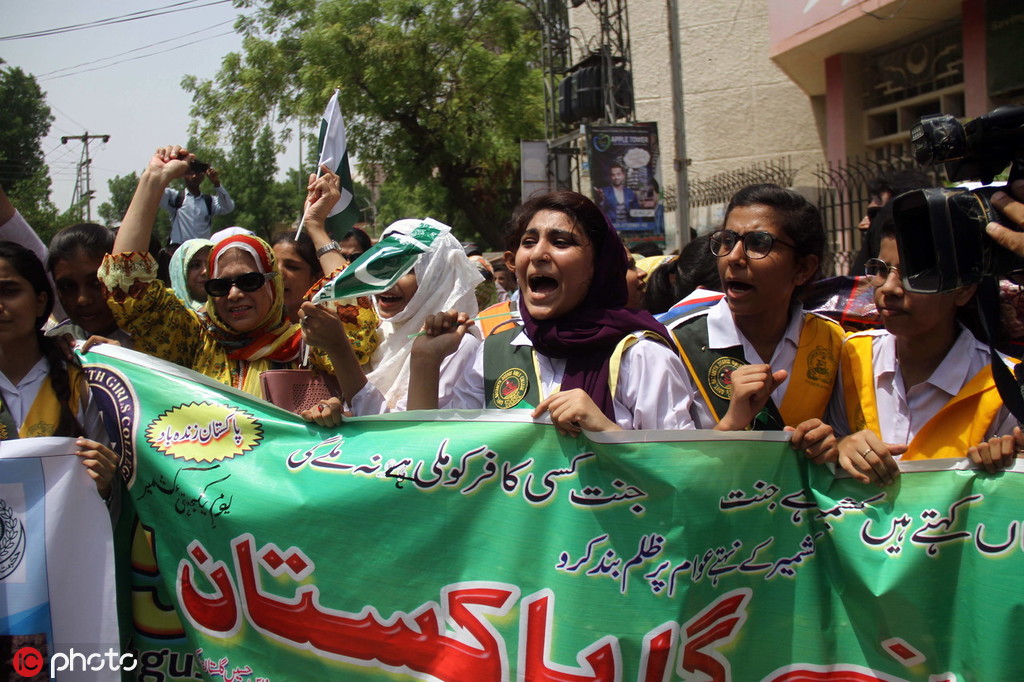 Pakistani school girls shout slogans during a protest after the Indian government removed the special constitutional semi-autonomous status granted to the region of Kashmir, which both India and Pakistan claim, in Muzaffarabad, the capital of Pakistani-administered Kashmir, Aug 5, 2019. (Photo: IC)

By revoking the special status of India-administered Kashmir and splitting it into two union territories of Jammu and Kashmir, and Ladakh on Aug 5, New Delhi has opened a Pandora's box. India's unilateral move to fundamentally change the administrative division of the region and seize Pakistani and Chinese territories has angered its two neighbors and invited strong reactions from both.

New Delhi's intention may be to completely change the status quo of the disputed region by revising its domestic law. But its careless move could put the already fragile geopolitical balance at risk, with many fearing the situation could deteriorate in the future.

To begin with, the security situation in Kashmir could take a turn for the worse. Ever since Kashmiri separatist leader Burhan Wani was killed by Indian security forces in July 2016, the troubled region has been mired in clashes between Indian forces and Kashmiri protesters. Given their strained relations with the Indian security forces, Kashmiri people fear that by abrogating the region's special status, which endowed the region near-autonomous rights, the Indian government aims to change the demography of the region.

Thousands of Indian troops were deployed in Kashmir before the Indian government revoked Kashmir's special status. Just weeks before the move, some reports said Indian forces had used cluster bombs against civilians along the Neelum River causing many casualties. For more than a week, telephone, mobile phone and internet services have been suspended in India-administered Kashmir. And while all main roads are blocked, top Kashmiri politicians have been put under house arrest.

Against this backdrop, armed militants could trigger a new round of violence in the restive region and the resulting security disaster could trigger a devastating storm in South Asia.

Second, India's reckless move to change the legal status of Kashmir could deal a lethal blow to India-Pakistan relations. The Kashmir issue led to three wars between the neighbors, and Pakistan sees India's latest move as infringing on its national sovereignty and security interests. Which means India's move in Kashmir will put India-Pakistan relations to further test.

Third, the conflict between Hindus and Muslims in India could intensify. Since coming to power in 2014, the Bharatiya Janata Party has been aggressively promoting its Hindutva agenda leading to increasing attacks on Muslims and Christians, even lower caste Hindus. In fact, Indian Prime Minister Narendra Modi was re-elected earlier this year by taking a strong position against Pakistan and stirring up Hindutva sentiments among the majority community.

Yet Hindutva could lead India-Pakistan relations to a point of no return, and aggravate the conflicts between different communities, religious groups, and the upper and lower castes in India. As a double-edged sword, Hindutva could win the support of the majority community, mostly the upper castes, but it could also spell trouble for the BJP government if it cannot meet the Hindu nationalists' increasing and absurd demands.

The international community has largely criticized India's move and expressed deep concern over the situation in Kashmir. UN Secretary-General António Guterres recalled the 1972 Simla Agreement between India and Pakistan, which states the "final status of Jammu and Kashmir is to be settled by peaceful means" and in accordance with the UN Charter.

While India argues the Kashmir dispute is a bilateral issue between New Delhi and Islamabad and not subject to third-party mediation, the UN Security Council could get involved if the situation in Kashmir continues to worsen and tensions between India and Pakistan reach a flash point, because the UN Charter states that the UN Security Council has the responsibility of safeguarding international peace and security.

Essentially, the Kashmir conflict is a dispute left over by colonial history and should be peacefully resolved according to the UN Charter, relevant UN Security Council resolutions and bilateral accords. And both India and Pakistan should heed the international community's call to exercise restraint and prevent an armed conflict.

The author is deputy director of the Department for Asia-Pacific Studies at China Institute of International Studies. The views don't necessarily represent those of China Daily.