OPINIONS India’s discrimination against Muslims ignored by the West

India’s discrimination against Muslims ignored by the West 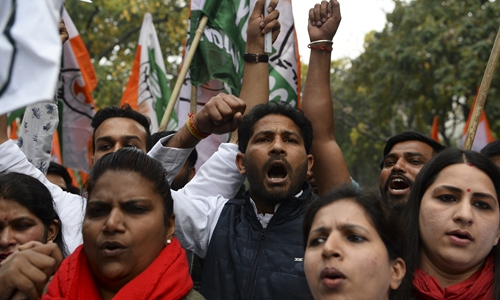 Activists shout slogans during a protest against Hindu-first policies in New Delhi on Monday. (Photo: AFP)

The Citizenship Amendment Act (CAA) passed in December 2019 by India's Parliament, fundamentally changed its Citizenship Act of 1955, triggering protests among people of different ethnicity that have escalated in recent days. As of Saturday, at least 42 people have died in riots and hundreds more injured since February 23 in violent clashes between those favoring and those opposing the legislation.

The CAA provides Indian citizenship to Hindus, Sikhs, Buddhists, Jains, Parsis and Christians from Afghanistan, Bangladesh and Pakistan, who entered India in or before 2014. But the legislation excludes Muslims, drawing widespread criticism for discriminating against people of the Islamic faith. It has become another act that has fueled India's religious conflicts. The bill uses religion as a criterion in determining Indian citizenship in violation of the secular principles enshrined in India's Constitution.

As the bill grants amnesty to non-Muslim immigrants from the three neighboring countries, critics argue it discriminates against Muslims and has caused widespread protests.

Yet the ongoing protests and riots have failed to change the policies of the Indian Prime Minister Narendra Modi's administration and the Bharatiya Janata Party (BJP). Compared to previous religious riots and clashes, the New Delhi protests are more violent and have caused more deaths and injuries. The clashes have drawn some worldwide attention and coincided with US President Donald Trump's first official visit to India.

For Modi and his BJP, improving the capacity of India's central government and national integration have become their core tasks. Modi has always regarded building a robust central government as a priority and a requirement for upgrading India's economy and its advance toward becoming a global power.

Since Modi took office in 2014, his Hindu-nationalist administration has been eroding India's secular principles. After Modi won reelection in 2019, his government seemed to accelerate the pace. The abolition of Kashmir's special status, the rebuilding of a Ram temple at Ayodhya, and the enactment of the CAA have not only been pledges Modi made to Hindu nationalist organizations, but they are also used to rally and inspire Hindu nationalism. The Modi administration's policies have previously not met strong resistance inside the country.

The victims of the highly controversial CAA are Indian Muslims. After partition of India in 1947, a large number of Muslim elites fled to Pakistan, but many millions did not. Many of India's Muslims have not been well educated and they have resigned themselves to a life of adversity.

The BJP has been skilled in managing such issues. The Modi administration and the BJP accuse the Indian National Congress (INC) and other opposition parties of putting their own interests before India's national security and the anti-terrorism cause. This has purposefully stirred the conflict, but the BJP maintains the opposition is to blame for the protests and riots.

Meanwhile, the Islamic world is divided. Countries such as Saudi Arabia and the United Arab Emirates value India's energy market, while others including Turkey and Malaysia are busy enough with their own affairs. Pakistan hasn't received much support from the Islamic world.

The US and the West have turned a blind eye to India's discriminatory policies and legislation. The brutal conflict that took place during Trump's trip to India should have attracted attention from the US and the West, but they stayed silent only because India is labeled a democracy. Asked by reporters, Trump said the protests were India's internal issue.

Although some US members of congress expressed concern over the protests, they have had no impact on India. The US and the West not only covet the Indian market, the country's strategic value is equally important, suggesting India can be used to contain China. Although some Western scholars have criticized the discriminatory policies and acts of the BJP, the US and other Western countries seem unconcerned because the party's moves don't threatened their national interests.