OPINIONS India's election cash would do more good on training

India's election cash would do more good on training 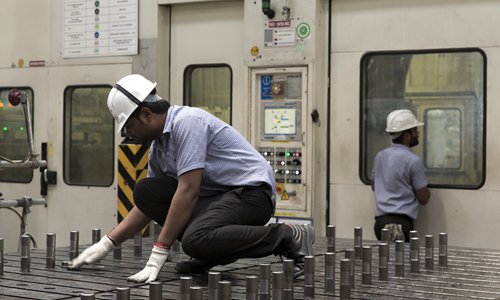 Employees work in front of a press shop at the Mahindra & Mahindra facility in India in April 2018. (Photo: VCG)

Some studies have estimated that Indian politicians may spend about $7 billion on their campaigns for the upcoming general elections, a splurge that is likely to be costlier than the 2016 US presidential election.The general election in India will start on April 11 and continue till May 19, and the counting will be held on May 23. But increased spending on elections means many interest groups have become involved in the campaign in a bid to influence Indian voters. One of the main characteristics of populism is seeking chaos and diversified appeals.This pending splurge has added to concerns that populism is affecting and becoming a cost burden for India's general election. This isn't good news for China.Chinese investors have been taking a close look at the election in India, which is now an important overseas market for them. Populism is on the rise in India. India's projected campaign spending is a reflection of this simmering populism and it may in turn intensify the sentiment. Indian politicians usually bribe voters with little gifts or cash. The campaign spending will also give a boost to India's advertising industry, as media reports said costs are rising because of the use of helicopters by traveling party workers and the use of social media. With increased spending on elections, it will be easier for the country's super-rich to let ordinary people hear their voices. They may take advantage of the rise of populism to attract votes.If Indian elections are so expensive, then where is the money coming from? In India, there is less transparency when it comes to political contributions. It seems that Indian society is becoming more polarized, a reflection of nationalistic sentiment. Rising populism in India will substantially increase the cost of the general election and economic governance, and in turn stimulate nationalistic sentiment, throwing the economy off track. India is at a critical moment - it's determined to upgrade its economy and develop its manufacturing sector. The emerging economy is thirsty for investment in fields such as education. Although some observers believe the campaign spending can give a boost to the economy, a costly general election isn't good news for India. After all, the same amount of money would create more value for the economy if it was to train skilled workers.