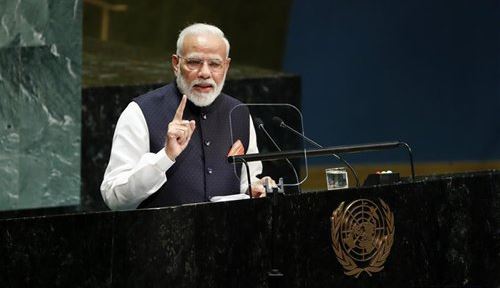 The National Interest, a US international affairs magazine, recently published an article "This is How India Plans to Keep Its Neighbors Away from China's Influence." It argues that Indian Prime Minister Narendra Modi administration's "neighborhood first" policy shows the South Asian country's attempt to counter the China-proposed Belt and Road Initiative (BRI) and to maintain strong regional influence.

The policy has been regarded as one of Modi's pivotal strategies in his second term. Shortly after being reelected, Modi visited two neighboring countries - the Maldives and Sri Lanka, in his first trip abroad. Later he also visited Bhutan. This was an attempt to pursue closer relations with these three countries.

There are several reasons for India to attach importance on its "neighborhood first" foreign policy.

First, India is a geographic hub in South Asia, bordering almost all countries in the region. If other South Asian countries adopt "neighborhood first" policy like India, the move would reinforce India's central position in South Asia.

Second, the majority of South Asian countries were British colonies. Some independent countries which have never been colonies were once to some extent dominated by the UK in terms of diplomacy. After becoming independent, India took over most territories of the British colonists and also wanted to inherit the vast influence and leadership that the UK once had. The map of India today is still the same as the one drawn by the British people. Even the Indian army, when planning its sphere of action, often goes the way of the British Empire.

Third, India shares many similarities with other South Asian countries with regard to culture, language, religion and customs. India believes that it is not only the geographic and political hub, but also a cultural center in the region. Except for Islam, other religious cultures originated in India.

New Delhi has long adhered to its "neighborhood first" policy. But the ways India carries out the policy are not consistent. Bullying is a tactic which India often uses. India has often meddled in the affairs of small and medium-sized neighboring countries.

For example, after the Maldives signed a free trade agreement with China in December 2017, Raveesh Kumar, spokesperson of India's external affairs ministry, said, "It is our expectation that as a close and friendly neighbor, Maldives will be sensitive to our concerns in keeping with its 'India first' policy." When Sri Lankan government transferred the Hambantota port to China on a 99-year lease in July 2018, Kumar said, "We continue to take up with Sri Lanka issues related to the security concerns in the region and expect that our Sri Lankan friends will keep in mind our security concerns and sensitivities."

Since independence, this Asian country has been seeking solid relations with its neighboring countries. In the 21st century, with a series of fresh moves by China, especially the introduction of the BRI, India reiterated its "neighborhood first" policy, the core of which is to compete with China for influence in the neighborhood.

Relations between great regional powers and small and medium-sized countries in India's periphery are complicated. On one hand, these small and medium-sized countries hope to gain economic interests from great powers. On the other hand, these small countries are reluctant to be controlled by the great ones. Therefore, the stronger India's intentions to exclude the influence of outside powers from South Asia, the more the keenness small and medium-sized nations have to balance India by developing closer ties with countries outside the region. With limited economic capability, it is difficult for India to overcome this contradiction. It is also tough for New Delhi to avoid periodic fluctuations in ties with neighbors.