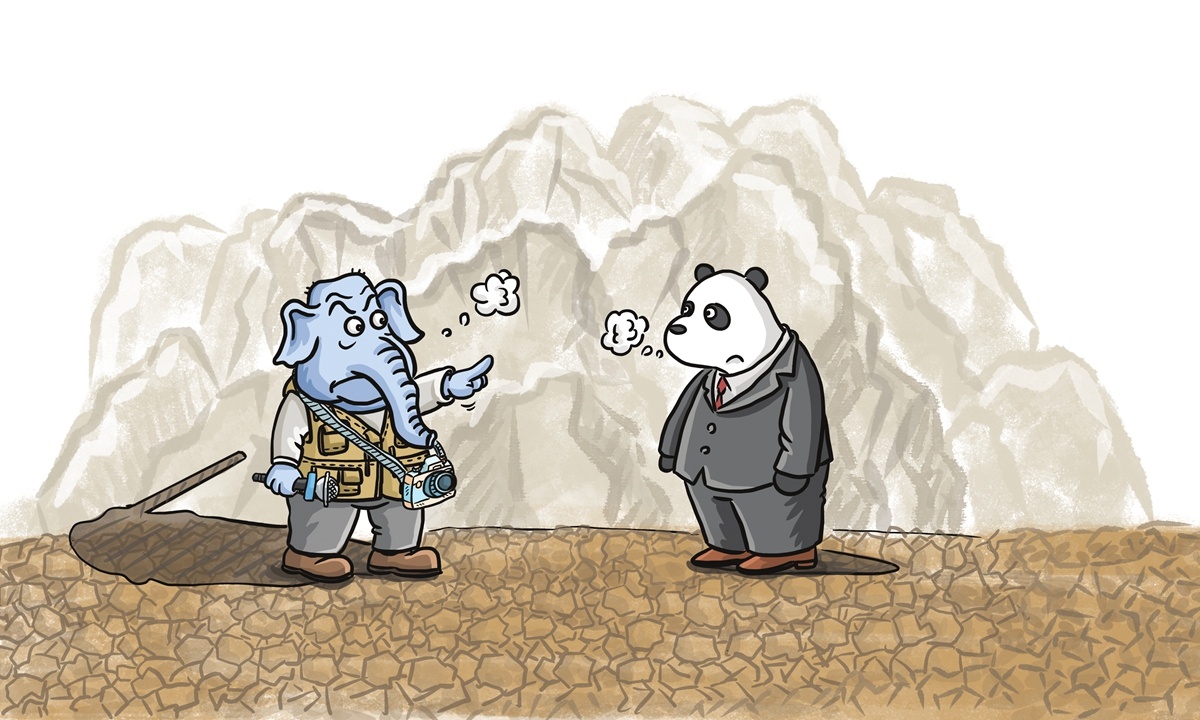 Since May 2020, India had repeatedly provoked China in border areas, resulting in months of standoffs between the two countries. However, Indian media outlets have been distorting facts, thus misleading the Indian people. This has to a large extent stirred up waves of anti-China sentiments among Indian netizens who do not know the truth. China-India relations are deeply influenced by online public opinion, which also has an impact on India's policy options. These rhetoric has brought about extremely negative effects to the overall China-India relations.

At present, Chinese and Indian troops have carried out disengagement at the northern and southern banks of the Pangong Tso lake. This has clearly eased tensions in the border areas. However, some Indian and Western media deliberately misinterpreted the move, hinting that it was an act to save their reputations and to gain political support at home.

Some Indians even took the opportunity to characterize the Indian officers who unilaterally provoked the border skirmishes as heroes defending their country. They hyped their stories up on social media. This further incited hostility toward China among Indian people and undermined peace and stability on the China-India border.

Since the latest round of border conflicts, India has implemented a series of discriminatory measures against China, including blocking a number of Chinese apps and restricting Chinese investment. Bilateral relations with China have fallen to rock bottom. Anti-China sentiments in India continue to rise. Indian media outlets have played a role in fanning these flames.

As the world enters the era of social media, it is necessary for media outlets of any kind to report objectively, fairly and independently on the daily happenings around the world.

However, Indian media outlets are mostly privately owned. In order to attract readers, they often violate professional ethics, ignore facts, and publish information that is beneficial only to themselves. In addition, some Indian politicians often use media to show their extreme reactions to China. This has resulted in a severe lack of strategic mutual trust between the two countries.

Some Indian people's unfavorable view toward China makes them less willing to communicate with or to rediscover China. Anti-China discourse has become a new political correctness in India.

In the era of informationization and globalization, new media, newspapers and magazines have become the main channels for people to obtain information. Indian media's sensational propaganda of the so-called China threat has created a distorted image of China in the minds of the Indian people.

The image of China in Indian media is neither objective nor real. Instead, it is a mirage for India to vent its sadness, resentment, desire and fear. In addition, the war between the two countries in 1962 had left a psychological shadow on the Indian people. Since then, the Indian public generally has had a low preference for China, and it continues to decline.

Whenever disputes occur in the China-India border area, the Indian government, think tanks, and media outlets always collaborate: The media fabricates fake stories and news; certain politicians support the media reports; social media does not carefully verify the source of the information. This trend exacerbates the declining mutual trust between the two countries. Now, whenever the two countries encounter disputes, India's domestic public opinion tends to put pressure on the Indian government, leaving Indian leaders with no alternative but to take tough actions on issues with China.

Therefore, China and India need to deal with their differences calmly and steadily. In particular, media outlets should play an active role in it. They should create larger public opinion basis for enhancing mutually beneficial cooperation.

The author is a research fellow at the Institute of International Relations at the Shanghai Academy of Social Sciences.