India should beware price of hitching its wagon to the US 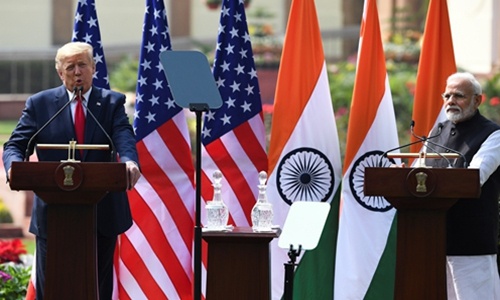 US Secretary of State Mike Pompeo on Friday urged closer ties with India, as the country will "absolutely need the US to be their ally and partner" in the fight with China, the AFP reported. Since the US put forward the Indo-Pacific Strategy, India has been a target that Washington is eager to rope in. Taking advantage of India's pursuit of being a major power, the US has made empty promises to New Delhi and used recent border clashes between India and China to sow more discord.

The US has been wishing to form an alliance with India - so it can comprehensively besiege and contain China. Pompeo met with Indian Minister of External Affairs Subrahmanyam Jaishankar on Tuesday in Tokyo and he will travel shortly to New Delhi with US Defense Secretary Mark Esper for talks with their Indian counterparts on October 26 and 27. These frequent high-level meetings between the US and India are actually a reflection of Washington's eagerness.

Such arrangements could indeed make India feel it is a big country of great importance. But New Delhi is hesitant, as the Modi government clearly knows that the US sees it mainly as a pawn to confront China. If India really forms an alliance with the US and follows the US, New Delhi's autonomy is bound to be affected - at that time, it won't be surprising to see India fall into a dilemma of whether to give priority to its own interests or those of the US.

Getting involved in conflicts between the two largest economies is of no value to India's pursuit of being a major power. Instead, it will only consume time and resources, making New Delhi drift away from its major-power dream.

Pompeo has constantly emphasized the so-called threat of China's development to India, and emboldened India to confront China head-on. But such a narrative exposes nothing more than US' impure purposes.

It is the political need of the Indian government to act tough when it comes to the border disputes. But more urgently, New Delhi hopes that it can realize rapid economic growth and become an alternative to China in terms of global industrial chains. This is fundamental for India to ensure its status as a major power. However, the US' lip-service that has dragged on for years is unhelpful to India in this regard. Washington will never really help a big country with the potential to become a new competitor and challenger.

The problems between China and India are regional after all. To address them, the two countries need to calmly meet each other halfway. Any malicious interference from the outside will only further complicate the situation. India should have a clear head that hitching its wagon to the US will only push it away from reaching its big-power goal.

In recent years' interactions, the US and India have been using each other for their own ends. Under pressure from Washington and domestic political struggles, the Modi administration has to do something. However, developing deep ties with the current US is tantamount to playing with fire - it comes at a price for New Delhi.