OPINIONS India should look to China for its pollution solution

India should look to China for its pollution solution 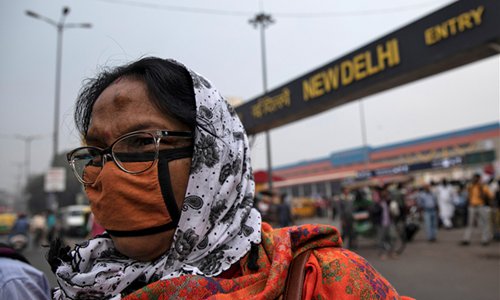 For the past several days, India's capital city New Delhi has remained shrouded in smog. British media likened the city to a "gas chamber." According to figures released by the US Embassy in India, particulate levels were over 19 times the World Health Organization's (WHO) safe maximum. Particles smaller than 2.5 microns can enter the bloodstream.

A UN report revealed that India is home to 14 of the world's 15 most polluted cities. Surprisingly, air pollution claims over one million Indians annually, according to multiple Western institutions.

Indian netizens cited China's accomplishments in air pollution control when complaining about the Indian government and its failure to curb pollution. Beijing's blue skies and autumn scenery have stood out in stark contrast to New Delhi.

Since 2013, China began an unprecedented battle to protect its blue skies. At that time, many Chinese cities, including Beijing, were choking on smog, and PM 2.5 data released by the US Embassy was a hot topic on the Chinese internet, triggering  discontent and complaints. Had someone predicted then that air pollution would have been controlled within five years, they would have been considered a big talker.

Just a few years ago, when China was hit by smog, questions and doubts swirled on the country's development model. The success that China had achieved was also questioned by the media. However, those claims that use pollution to refute China's political system are losing ground when the results of China's efforts to combat air pollution become obvious and India, by contrast, is enshrouded in smog which is even worse than what China once suffered.

Developing countries will face challenges posed by smog after entering different development stages. But the China vs. India paradigm indicates that different political systems yield various results when reducing pollution. In the battle to maintain blue skies, the advantages of the Chinese system are exemplified.

The Chinese government quickly responded to public demand for reducing air pollution and implemented concrete action that showed favorable results. The China Air Quality Improvement Report 2013-2018 released by the Ministry of Ecology and Environment in June said that in the practice of air pollution control in the past six years, China had explored and formed a model which highlights government's dominant role and participation from enterprises and the general public. This is a masterpiece plan in the history of air pollution control.

On the contrary, although the Indian government has responded to public discontent, the results have remained unsatisfactory. Due to the fundamental weaknesses of its political system, India's governments, enterprises, and society could not team up in a unified force in the smog control campaign. Political parties wrangle among each other, but they only care about votes. Without firm determination, strong mobilization, and executive abilities, it would be impossible to defeat such pollution.

It's worth pointing out that China has maintained economic growth over 6 percent while making strides to curb pollution. The overall power generation has increased, and the level of modernization continues to improve, but China has achieved a skillful balance between environmental protection and economic development. This is very commendable. India's GDP is only one-fifth of China's, and two countries have seen a similar economic growth in recent years. However, India's energy consumption is much lower than China. The smog crisis in India provides a negative example of environmental protection for the world.

Both China and India are victims of air pollution and two countries should join hands to create clear blue skies. What China has achieved offers valuable experience to India, while China could also learn from India's plight. China and India mirror one another, and there is plenty of room for cooperation.