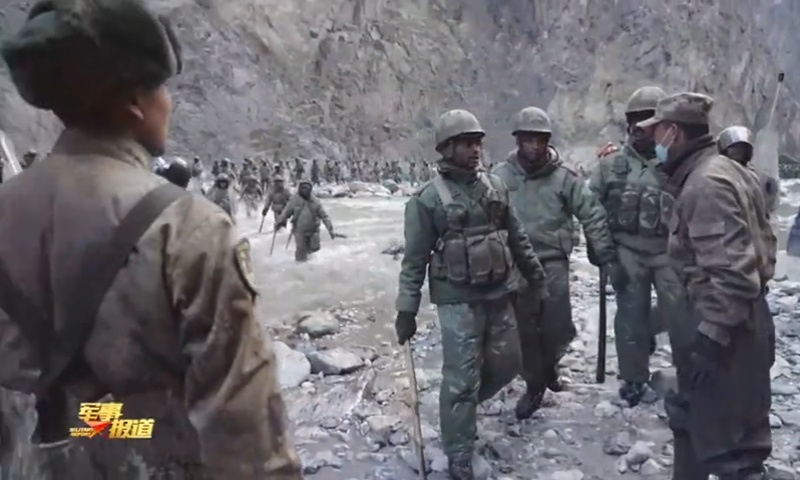 Five Chinese frontier officers and soldiers stationed in the Karakoram Mountains have been recognized by the Central Military Commission of China for defending national sovereignty and territorial integrity in the Galwan Valley border clash in June 2020. Four of them died when dealing with the Indian military’s illegal trespassing of the Galwan Valley Line of Actual Control.

As a response, some Indian media and public opinion either hinted at or directly doubted China’s “concealment” of actual casualties. Some Indian media even maliciously distorted the facts and exaggerated the casualties on the Chinese side, trying to save face.

This shows that many people in India place themselves in a weak position. Considering India’s humiliating defeat in the 1962 China-India War, many Indian people are desperately longing for a victory. Therefore, they insist that New Delhi has won this time, regardless of the facts.

Indeed, China’s national strength is far stronger than that of India. China’s GDP is about five times that of India, and China’s defense budget is nearly three times that of India. This being the case, the two countries’ armies have still started to disengage simultaneously, which can be regarded as a “victory” for India to some extent because India could have suffered a huge loss.

Strategically, it is China’s good wish to not have military conflicts with India and try its best to resolve disputes through peaceful means. However, Indian public opinion regards this as Beijing’s “weakness.” New Delhi cannot accept the failure and thus it portrays itself as a winner. There is actually no basis for India to exaggerate casualties of the Chinese side. Some Indian people are eager to win and they feel that only by exaggerating Chinese casualties can they prove India has won. Therefore, Indian media and public opinion are deceiving themselves and distorting the facts, trying to regain a little confidence.

An Indian netizen said on Twitter that “if only 4 had died” then China “wouldn’t have pulled back.” This represents a general tendency of Indian public opinion. They believe that if China really obtained such a big advantage, then Chinese soldiers would have to launch a full attack. But China did not do so, so they doubt the information released by Chinese officials. Indian public opinion not only fails to understand China’s restraint, but is even wantonly discrediting the Chinese side.

India has been influenced by a Western mentality, including the zero-sum mentality. Indian public opinion does not understand China’s sincerity in resolving disputes. It is difficult for many Indian people to understand why China would exercise restraint when the country has an advantage in its national strength, military and economy. China could have easily resolved the border dispute with India through war, but China did not.

Also, the Chinese side chose to unveil the details of the four People’s Liberation Army martyrs now because China did not want to hype domestic national sentiment. If China unveiled the details during the Galwan Valley border clash, then it would cause anger across China. China still hopes to resolve disputes with India through peaceful means and we do not have the intention to wage war against India.

But Indian public opinion does not understand this. This reflects that many Indian people believe in the law of the jungle -- they believe that whoever is strong has the reason to attack. They do not understand China’s restraint, nor do they understand a country’s development relies mainly on domestic reform, economic development and people’s diligence and wisdom. Therefore, India has failed to understand why China has developed so fast. This also explains why India’s development lags far behind that of China. This is determined by their mentality.

Thus, India’s overall mentality has not changed much compared with 1962. India is still so conceited and arrogant. New Delhi knew it well that it lacks the strength to provoke Beijing, but it still made the wrong decision because of the strong domestic nationalist sentiment.

But in 1962, China and India lacked mutual understanding and to a great extent, misjudgments led to the China-India War. Now, China and India know each other quite well and they also have a clearer understanding of each other’s national strength. India should know that if it really launches a war against China due to domestic sentiment, it may suffer from a more humiliating defeat compared with 1962. This is also the reason why India dare not act too rashly despite its tough attitude.

China does not need to care too much about the radical Indian media and public opinion. Indeed, some Chinese individuals can discuss the issue with Indian netizens and the facts must also be clarified. But China has the strategic determination to not care about some Indian people’s self-entertainment.