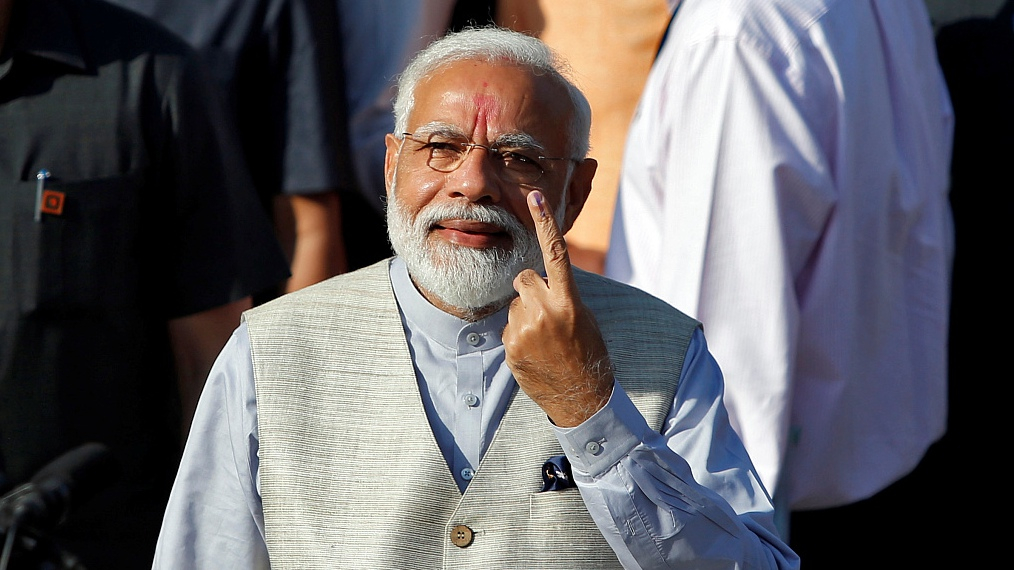 China and India may not be on the same page over the recent developments in Kashmir, but Indian Prime Minister Narendra Modi's much-talked-about television show with Bear Grylls has attracted more than eight million viewers across China.

Modi recently made an appearance as a high-profile guest in the British show "Man vs Wild," hosted by famous adventurer Edward Michael Grylls, or Bear Grylls, for Discovery Network. The highly-publicized episode was on environmental change and wildlife conservation as the two-shot the episode while crisscrossing India's prominent tiger reserve Jim Corbett National Park in the north Indian state of Uttarakhand.

The special episode that made the Indian Prime Minister the second-ever head of a state after former US president Barrack Obama to be featured in the popular extreme expedition series was aired for the first time in 180 countries on August 12. In China, the episode was uploaded on popular Chinese video sharing website Bilibili.com where 8.4 million people have viewed the unique show featuring the neighboring country's prime minister.

The just-over 40-minute video has so far registered 340,000 likes and followers while over 4,000 Chinese netizens have posted comments on the episode on the Bilibili.com page.

"PM Modi ... walks out from the political meetings and talks with Bear in the reality show," Zhang said. "Chinese people know more about the Indian politician in a more direct way. What language he speaks, how he behaves, and the India landscape as well."

In fact, even before its world premiere, the overseas edition of China's People’s Daily wrote about the teaser of the then upcoming show in its overseas news section on July 27. They quoted leading Indian daily, Hindustan Times, in writing about the adventure reality show.

Interestingly, throughout the show, Modi conversed with Grylls in Hindi while the British adventurer communicated in English. Modi faced a number of trolls over his conversation with a man, who neither understands nor can speak the Indian language but he revealed in his monthly radio show, Mann Ki Baat (Heart’s voice), on Sunday, "Some people ask me one thing, 'Modi Ji, you were speaking in Hindi and Bear Grylls does not know Hindi, so how did you carry on such a fast conversation between the two of you?' People were also curious to know if their conversation was edited and how many times they had to shoot.

"The reality is that technology was used extensively in my conversation with Bear Grylls. Whenever I spoke, immediately there was a simultaneous translation into English or simultaneous interpretation in his ear. So I used to speak in Hindi, but he heard in English and because of that the communication became very easy and this is an amazing aspect of technology."

Earlier, while speaking about the show, which is in its eighth season, Modi had said, "For years, I have lived among nature, in the mountains and the forests. These years have a lasting impact on my life. So when I was asked about a special program focusing on life beyond politics and that too in the midst of nature I was both intrigued and inclined to take part in it."

While praising his celebrity guest, Grylls told Indian news agency ANI, “The Prime Minister, as a world leader, is calm in a crisis, as he braved all odds, including inclement weather.

“What shone bright for me was his humility. He was a very humble guy and even though there was pouring rain and his secret services were trying to get out umbrellas, he said ‘no I’m fine’ and then we reached a river. I made this raft out of reeds and a tarpaulin. I said I think we can get across the river using this, but the secret services were like ‘we cannot put the Prime Minister in a little homemade raft’. But he (Modi) said he was fine and we’d do this together. He asked me to get in too, but the things started sinking. So it was my swimming and pushing him, he was soaking wet but there was a big smile on his face even through the rain. You learn about people in those moments."

A slew of global celebrities, including Hollywood actresses Kate Winslet and Julia Roberts, tennis legend Roger Federer, basketball icon Michael Jordan and Obama, during his presidency in 2015, have featured on the show.