OPINIONS Indifference or making a difference: Who cares about 'COVID orphans' in the US?

Indifference or making a difference: Who cares about 'COVID orphans' in the US? 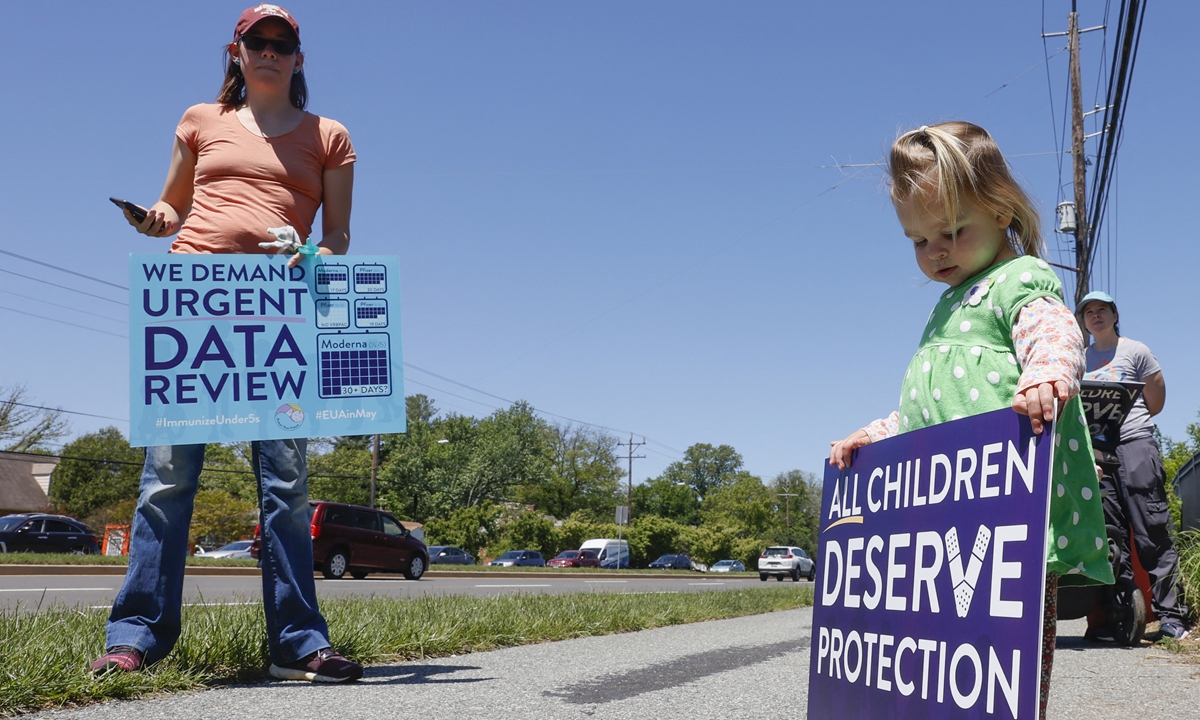 A child is seen with a sign during a demonstration urging the Food and Drug Administration to authorize vaccines for children under 5 at the FDA on May 09, 2022 in Washington, DC. (Photo: AFP)

May 4, 2022 is a sad day for many Americans. NBC reported that the COVID-19 deaths in the US officially topped 1 million on that day. To put it into perspective, just imagine that the entire population of San Jose, the 10th largest city in the US with roughly 1 million residents, suddenly evaporates.

The deceased cannot come back alive again, yet many of them are not even able to rest in peace, because their beloved ones, including their kids, are consequently left in orphanhood, trauma, desperation and danger, as a result of their sudden departure.

Recent studies show that as of the beginning of this April, around 200,000 Americans under 18 have lost at least one parent in the pandemic; around 250,000 children have lost a primary or secondary custodian. An "orphan crisis" is emerging amid the pandemic, the negative influence of which, to a certain extent, could lead to an even more profoundly contagious social problem.

In most cases, these kids or teens are supposed to get proper nutrition, education, love and all the support they need from their parents. But they suddenly find themselves waking up to a world of uncertainties and loneliness, haunted by devastating sadness and terror while wondering what might be falling on their young shoulders.

The nightmare doesn't end there. One major concern is the racial disparity among the pandemic orphans. Statistics show that Native American, African-American and Hispanic American kids are respectively 3.5, 1.4 and 0.8 times more likely to be orphaned than Caucasian American kids during the pandemic.

Another longer-term threat is looming large. A US National Institutes of Health report shows, "Loss of a parent is among the adverse childhood experiences linked to mental health problems; shorter schooling; lower self-esteem; sexual risk behaviors; and increased risk of substance abuse, suicide, violence, sexual abuse, and exploitation." It's disconcerting that these kids or teens, often in their most sensitive and impulsive ages, might be drawn to the wrong direction.

Thankfully, the US administration still has time to fix that; unfortunately, it remains doubtful whether they actually care about this man-made crisis. Experts have warned that from April 1, 2020 through June 30, 2021, 142,637 children in the US are estimated to have experienced the death of at least one parent, a custodian or other co-residing grandparent caregiver. More than 10 months have passed, and while the US administration is juggling with all sorts of problems regarding relief bills, inflation, and sending weapons to Ukraine, it hasn't bothered to even come out with an overall plan to address the issue.

This is why there has been continuous outcry for attention. For the legislators, the issue may be as trivial as choosing what to have for tomorrow's breakfast, but for the orphans, it is about if and where they will have tomorrow's breakfast. The US government has been denying the ill and the old their basic human rights to live and thrive. Freedom should not be the excuse for inaction, and economy should not be pumped up at the sacrifice of numerous lives.

For the 1 million who have passed away due to the US government's inaction and irresponsibility during the pandemic, the loss would be immeasurable if multiplied by the contributions they make in their families, communities and the society.

While the darkness of the Victorian era has been confined to the dustbin of history, the tragic stories of Oliver Twist in his childhood are still happening in America. Who is watching out for the "COVID orphans?" It's up to the US government to choose between indifference and making a difference.

The author is a commentator on international affairs, writing regularly for Global Times, China Daily and so on.