Industry, agriculture and consumption serve as bedrocks of Chinese economy 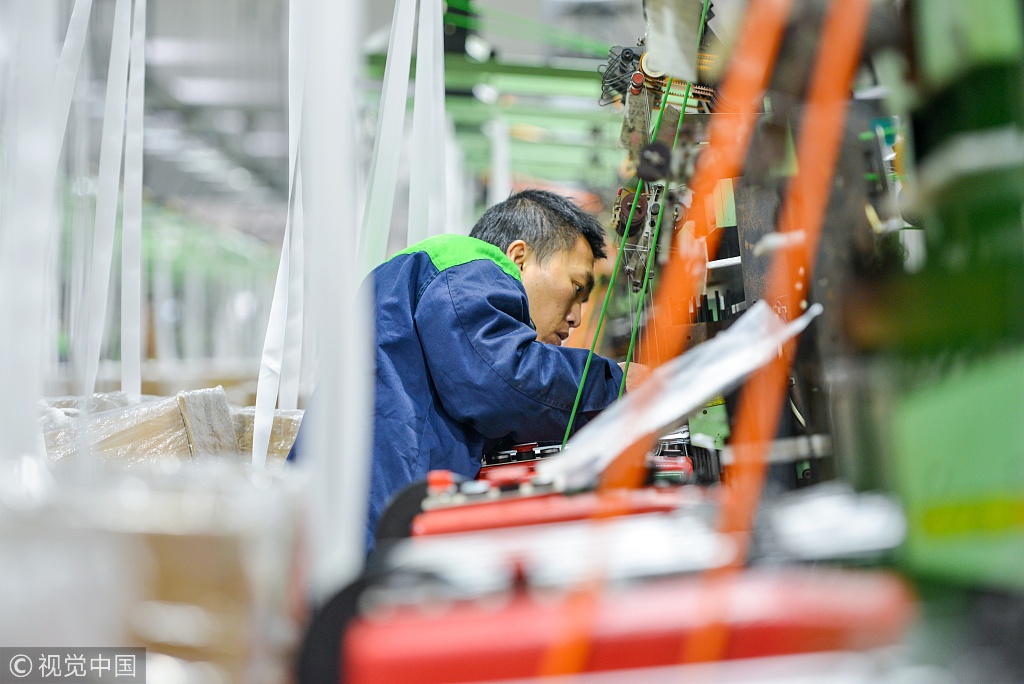 A worker labors at a label manufacturer in Huzhou, Zhejiang province. (Photo: VCG)

China, maintaining medium- to high-speed economic growth amid high-quality development as a huge economy of over $10 trillion, is making an unprecedented miracle in the world economic history.

The country has kept its economic growth within a range of 6.4 percent to 6.8 percent for 14 straight quarters, with consumption contributing the largest part to GDP growth for 5 years in a row. Besides, China has also topped the world in digital economic growth for three consecutive years.

The world today is undergoing profound changes unseen in a century, with the rapid rise of trade protectionism. IMF Managing Director Christine Lagarde warned that trade tensions are leading to clouds accumulating on the horizon of the global economy which are “getting darker by the day”.

However, the Chinese economy has still achieved stable and remarkable progress despite the drastic changes, shedding a light of hope for the world to recover from sluggish economy and advance economic globalization.

Such better-than-expected stability of China’s economic performance comes from the firm “bedrocks”, including the expanding industries, unleashed potential of agriculture, as well as the huge consumption and better-structured foreign trade.

Industry is an important part of real economy, and stronger industry leads to stronger economic performance.

A 3D printer paving a road under the sea –a scene that was only seen in sci-fi movies, has been turned into reality by the high-precision gravel leveling barge, Yihangjinping 2, which was independently developed by China and firstly launched in Nantong, eastern China’s Jiangsu province.

The above is only a miniature of China’s rapid industrial development. In the first quarter of 2019, the country witnessed faster growth of industrial added value, and a quarterly rise of 2.5 percentage points of industry’s contribution to the general economic growth.

New impetus is being created by new technologies and industries. The fast growth in the production of high-tech and high value-added products such as 3D printing devices, grapheme, and new energy vehicles indicates the huge potential of Chinese economy in terms of high-quality development.

Agriculture also contributes a vital part to China’s economic performance, as the development of agriculture decides whether a country can achieve food security.

Currently, agriculture only accounts for less than 8 percent of China’s GDP, but the sector is still a foundation for the country’s mass rural population. In the first quarter of this year, both the added value of primary industry and per capita disposable income of rural residents reported growth.

From the Internet Plus strategy and the green concept, and from the enhanced attention on food safety to optimized supply chain of agricultural products, China has entered a new era in which agricultural and rural modernization is propelled by technology and innovation.

The stability and increased quality of China’s agricultural development indicated the consolidated momentum of the country in the sector. Agriculture, rural areas and rural people are playing a larger role as the ballast stone, winning an upper hand in effectively handling risks and challenges and laying a solid foundation for the general development of the country.

During the 4-day Labor Day holiday at the beginning of this month, Chinese movie theatres welcomed 34.67 million viewers, and a total of 195 million domestic tourist trips were made. 9,266 trains departed, and 16,000 flights took off and landed each day during the holiday.

China also maintained stability in foreign trade and foreign investment. The country’s total import and export in the first four months of this year was up by 4.3 percent from a year ago, and the actual exploitation of foreign capital in the first quarter grew by 6.5 percent year on year. Given the optimized structure of foreign trade commodities, foreign investors have shown their enhanced confidence in the Chinese market with concrete actions.

“Recent data indicate that government policy to stabilize the economy is taking effect,” said Financial Times, citing a senior strategist from JPMorgan Chase. China has enough tools for macroeconomic regulation, and the flexible “combination punches” of its policies are becoming increasingly mature.

China has always been a source of growth and a stabilizer of world economy. It will always send positive signals with concrete actions to comprehensively deepen reform, open up and promote free trade.