OPINIONS Information China can draw from US’ protests

Information China can draw from US’ protests 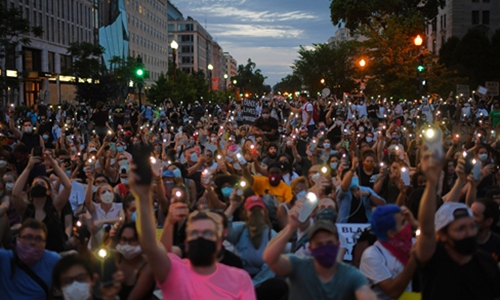 Protesters hold up their phones during a demonstration over the death of George Floyd, outside the White House on Wednesday in Washington, DC. (Photo: AFP)

The US has been rocked by protests for over a dozen days and Saturday's demonstrations reached an unprecedented scale.
The protests have reflected numerous issues in the US, but I would like to discuss the phenomenon from a different perspective, namely the valuable information China can draw from the US protests.
These protests are defined as "riots" by the US government, and they have clearly shocked the US. But the impacts are unlikely to become subversive, as almost all observers agree.
In fact, as long as protests around the world don't escalate into uprisings, don't become destructive riots that absolutely negate legal order, are not pushed by strong external adversaries, they won't fundamentally shake the country where they erupt. Threats posed by protests will also be limited.
Certain general protests in some developing countries have escalated into color revolutions. The international environment, in which certain Western countries proactively promote this change, is a fundamental catalyst for such revolutions.
Imagine if the balance of power between China and the US were reversed - if China is much stronger than the US. Picture China applying aggressive policies of intervention in the US. In that case, the US would feel entirely different when facing the turmoil.
There are all kinds of social dissatisfactions in all countries. All of them, after being accumulated for a certain amount, may erupt through abnormal channels. No country, including China, could completely prevent street protests.
But experience from around the world tells us that the stronger China becomes, the more it is able to say no to external interferences via exercising its sovereignty. The greater collective confidence and cohesion the Chinese society has, the more powerful the country becomes to put protests under control and prevent them from deteriorating.
In other words, the degree of danger of protests in countries is not a fixed constant. It varies with changes of national strength and geopolitical situations. Mass unrest in the US will hardly subvert the country, but it is causing more damages to the US society than ever before. It is triggering more anxiety among the US political elites. All those reflect a downward trend in the overall US strength and capability to take situations under control.
China is not a country which is born or destined to be afraid of protests. The perception and feeling of the Chinese people in this regard will certainly change as the country develops. Accelerating China's development, ensuring more achievements in development and rationalizing China's internal governance are the basis for growing collective confidence of the Chinese people. It is a fundamental way for China to solve all its problems.
Development should be placed at the top of China's national strategy. We should do whatever is conducive to development. As a driving force for development, social vitality is by no means a threat to social stability. China, which is developing faster than most other countries and has a founding philosophy to pursue the well-being of its people with social equity, will surely be able to stride forward more steadily and more firmly in a world full of uncertainties.