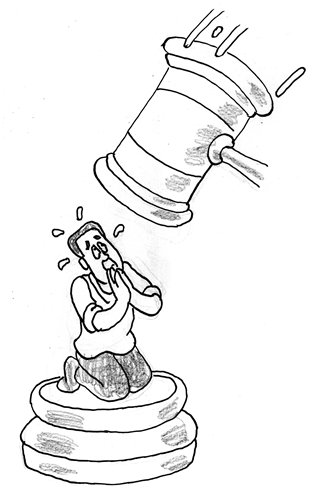 The first time I visited the Museum of the War of Chinese People's Resistance Against Japanese Aggression in Beijing three years ago, photos showing Japanese soldiers' brutality infuriated me. The Japanese invasion of China in 1931-45, especially the mass killing of more than 300,000 Chinese by Japanese troops after they captured Nanjing in East China's Jiangsu Province on December 13, 1937, is a horrific and dark moment in Chinese history that cannot be forgotten. It is believed that young Chinese people are more aware of the cruel history and should be more thankful as our peaceful life came at the cost of numerous lives and the blood of martyrs.However, some Chinese have recently sparked public outcry after making incendiary remarks on the sensitive issue. A man surnamed Wang was detained in Nanjing on March 10 after posting a message on a WeChat group. The 27-year-old wrote "Nanjing is a pit, and we should let the Japanese come and slaughter again," to vent his frustration at the low salaries being offered in employment ads. Wang is not the first man to have insulted victims of the Nanjing Massacre. A 35-year-old Shanghai resident surnamed Meng was detained for eight days on March 5 for posting a video online that used vulgar words for victims of the massacre in front of a memorial wall in Jiangsu. On a WeChat group on February 22, Meng said it was not enough to just kill 300,000 people. Earlier, two men in WWII Japanese military uniforms posing for pictures in front of a Nanjing war ruins site were sentenced to 15 days in prison in February.Chinese people accused of disrespecting war victims are often called "jingri," or "spiritually Japanese." They are die-hard supporters of Japanese in both mind and body. Didn't they study Chinese history? Did they have a conscience? In fact, many of them make fun of national tragedies to draw online attention. Chinese Foreign Minister Wang Yi denounced them as "scums among Chinese people." However, the public complains that those who insulted the nation's feelings and dignity haven't been severely punished. In Germany, giving a Nazi salute would land one in prison. But Chinese law defines such actions as disturbing public order, which carries a maximum punishment of 15 days in prison. Besides, there is no law in China that specifically applies to such egregious behavior. Frequency of such incidents shows some young people's ignorance and lack of awe for history in general. It also shows that history education of Chinese youth has been faulty. In the age of internet, various interpretations of Chinese history by foreign countries are accessible to young people. In addition, as some Japanese ACG (animation, comic and game) materials beautify war and warp history, the younger generation can be easily affected. Without proper and timely guidance, some young people will likely hold distorted view of history.Fortunately, there is some hope. About 38 political advisers from the domains of art, culture and entertainment backed a proposal on March 8 calling for a law to safeguard China's national dignity. Two days later, Jiangsu deputies to the 13th National People's Congress proposed toughening legislation to deter insults to martyrs and national heroes and protecting national dignity. Stricter laws can prevent foul language, desecration of war heroes and glorifying the Japanese army's atrocities. More importantly, families and schools need to boost education to raise young people's awareness of history. Chinese authorities should disseminate an authoritative version of history and reinforce teaching a fair view of history and peace. Young people can visit museums and memorial halls, as well as participate in memorial activities to remember the history of the war against Japanese aggression.A nation's future will be dim if its younger generation forgets the past. We must remember history and make it a lesson for people to cherish the hard-won peace and pursue a better life.