OPINIONS Iran issue should not be taken simply

Iran issue should not be taken simply 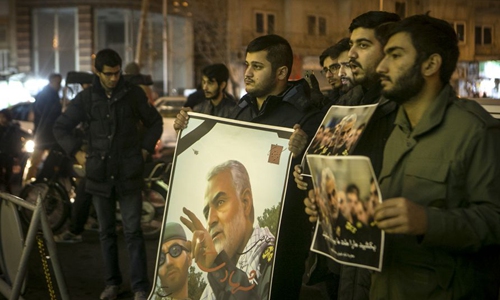 US President Donald Trump on Sunday warned if "Iran strikes any Americans, or American assets," 52 Iranian sites "will be hit very fast and very hard," and said the US "will be sending some of that brand new beautiful equipment their way."

Earlier, a senior Iranian Revolutionary Guards commander mentioned that 35 US targets had been identified by Iran. Esmail Ghaani, the successor to slain Iranian military commander Qassem Soleimani, said that "you will see the bodies of Americans all over the Middle East."

Iran needs to appease its troops and citizens while the US hopes to frighten Iran from hasty revenge. But Washington's logic - ensuring nothing will go wrong by warning Iran to remain calm - is fragile.

Trump expects to win support by killing Soleimani. Similarly, the Iranian government is faced with tremendous pressure to avenge the commander. It is politically dangerous for Iran's administration to not act at all.

Iran may bet that the US cannot afford a war especially in an election year and take retaliatory measures. Or Tehran may restrain itself while certain pro-Iran forces in the Middle East may retaliate against US targets. Attacks against US targets are also likely to take place worldwide where no responsible party can be found. No matter the situation, an extremely sensitive situation on the verge of an all-out war is possible.

Theoretically, when US-Iran conflicts are at an explosive point, some forces might be attracted and mobilized and lead to further fights between the two countries. If Washington and Tehran are unwilling to head into a large war, they should create fewer chances for those desperate impulses.

If the US and Iran engage in war, it would do more harm than good to China. It is naïve to think chaos in the Middle East could distract the US from China.

If there is serious chaos in the Middle East, the US would indeed be more stuck in the region and distracted. But Chinese purchases of oil from the Middle East lead the world by volume, which means China is far more dependent on the region's oil than the US. China also has large investments in Iran, Iraq and many other Middle Eastern countries already linked to China's economic interests.

No matter how messed up the Middle East is, the US will not alter its strategic vigilance against China. The US may adjust its short-term plans, which is meaningless to China. The US labels China a strategic competitor and it will not change the stance. In the long run, China should not rely on some region's conflicts to relieve pressure. China must develop a long-term capability of withstanding this pressure.

China is a third party in terms of opinion and morality. The US killing of Soleimani violates international law and impairs regional peace. This should be the Chinese public's basic understanding of this matter. China should offer sympathy to Iran as a way of balancing the regional situation. Other countries should provide condolences to Iran instead of provoking it to fulfill its vow of revenge.

The killing has also been controversial in the US. It is hoped that US decision-makers do not go too far on Iran.