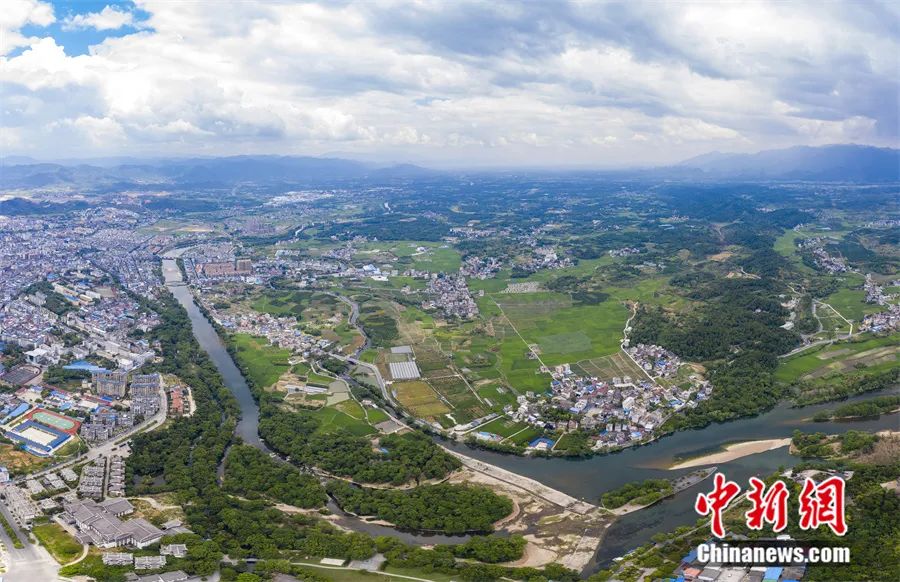 In addition to the world-famous Lijiang River, Guilin in Guangxi Province also has the Lingqu Canal, a man-made canal honored as the "Pearl of the World's Ancient Water Conservancy Architecture." After more than 2,000 years, this ancient canal is still full of vitality. Its functions have expanded from the initial military transport to shipping, irrigation, flood discharge, water replenishment for the Lijiang River, tourism and so on. It has also played an important role in connecting the ancient Maritime Silk Road.

Why did the inland Lingqu Canal become a link in the Maritime Silk Road? What is its unique value as the "Wonder of World Water Conservancy History" and the "Pearl of World Ancient Water Conservancy Architecture"? Why is it called a “wonder”? What is its significance to the development of world water conservancy development? Chen Xinghua, former deputy curator of the Xing’an County Museum in Guilin, recently answered these questions in an exclusive interview with China News Service.

China News Service: The Lingqu Canal was built in 214 BC. Why did the rulers then dig the canal?

Chen Xinghua: The most direct answer is, for grain transportation. Ancient documents record that "the soldiers were asked to dig canals to ship grain for the fight with the Yue people [ancient South Coast people].” When Emperor Qin attacked the Baiyue”[another name for ancient South Coast people], he asked the army to dig canals to transport food.

The completion of the Lingqu Canal connected the Xiangjiang River and the Lijiang River, and also the Yangtze River system and the Pearl River system, becoming a water transport hub connecting the Central Plains and South of the Five Ridges. In 214 B.C., when the Lingqu Canal was built and began to operate, Emperor Qin unified South of the Five Ridges and set up Nanhai, Guilin and Xiangjun prefectures. Since the Qin Dynasty, the Lingqu Canal has played a positive role in consolidating national unity, and strengthening political, economic and cultural exchanges between the North and South of China, as well as exchanges among people of all ethnic groups. At the same time, it also opened a channel from the Central Plains to overseas.

Chen: Lingqu Canal is famous for its ingenuity, hence its name Ling [literally ingenious]. As Fan Chengda, a poet of the Southern Song Dynasty, said, "No water management is as ingenious as the Lingqu Canal." At a length of 37 kilometers, it was the first mountain-crossing canal in human history and an outstanding example of canal projects around the world, reflecting the superb achievements of water conservancy technology in ancient China.

Lingqu Canal is the crystallization of the wisdom of the ancients. Many seemingly simple projects contain rich scientific and technological principles. For example, its Doumen [steep gate] is known as the "Father of the World Shiplock." Through the opening and closing of 36 steep gates to control the water level, the boats can "float across the mountains," which made them a great wonder in ancient times. "Curve gate" technology designed the channel as a curve to extend the water route, slow the gradient and meet the navigation requirements, which is the earliest example of this channel type in human history. The water discharge balance would automatically discharge surplus water into the Xiangjiang River whenever floods came, so the Lingqu Canal has not caused flooding in the county for thousands of years. These concepts can be used for reference in modern urban construction.

In November 1986, the World Dam Commission organized more than 60 experts and scholars from all over the world to study the Lingqu Canal, and praised it by saying, "The Lingqu Canal is the pearl of ancient water conservancy architecture in the world, and Doumen is the father of the world's ship locks."

CNS: The Lingqu Canal is in Xing’an County in northern Guangxi. Why did the inland canal become a link in the ancient Maritime Silk Road? Why did it play an important role in communication between China and Southeast Asian countries and other civilizations?

Chen How can the inland Lingqu Canal be linked to the sea? Because it connects the Xiangjiang River and the Lijiang River, and also the Yangtze River system and the Pearl River system. The Pearl River Estuary and Hepu were important entrances and exits of the Maritime Silk Road in ancient China. As a link connecting the Central Plains and overseas, the Lingqu Canal played a positive role in cultural and material exchanges between the Central Plains and South of the Five Ridges, and between China and overseas.

The Lingqu Canal’s role as a link in the Maritime Silk Road lies not only in the circulation of materials. In modern concepts, it is not only a logistics center, but also an information center that enhanced cultural exchange communication in science and technology. According to the records of dozens of Vietnamese envoys who entered China in history, most of them passed through Xing’an County by water, going back and forth through Lingqu Canal.

There is a rich ancient farming culture around the Lingqu Canal. There are Stone Age cave sites and the Xiaojin Site, which has been found through scientific archaeological excavationto be a major discovery of carbonized rice.Many agricultural relics from the Warring States Period to the Han Dynasty were unearthed there. There are also lots of literature records about agriculture there since the Tang Dynasty, and food culture and festival activities derived from farming. These excellent ancient farming cultures have benefited the people around the Lingqu Canal and spread overseas through the Lingqu Canal.

For example, in the Yuan Dynasty, Vietnamese envoys returned to Vietnam with Chinese crop seeds through the Lingqu Canal. In the second year of the reign of Emperor Guangxu of the Qing Dynasty [1876], Pan Hui, a Vietnamese envoy, wrote a book,輶轩丛笔[You Xuan Cong Bi], about what he had seen and heard when he made a diplomatic mission to China,. It is recorded in that book that on both sides of the Lingqu Canal, "many water channels are used to transport water into the fields with waterwheels, and the ashes from burned mountains and rocks are sown in the fields to harvest twice as much grain." This scientific method of using water as power to drive the waterwheel to irrigate the farmland, burning rocks into ashes and scattering them into the paddy field, which can double the harvest, was recorded by Vietnamese envoys and brought back to their country, spreading China’s excellent farming culture overseas from the Lingqu Canal.

CNS: After more than 2,000 years, what is the current situation of the Lingqu Canal? Why do experts call it a "living heritage"?

Chen: A living heritage is "a heritage that still retains its original or historical function." The concept appeared in the 1990s and was proposed by the UNESCO World Heritage Committee for the protection of world heritage sitesemphasize the dynamic use and inheritance of cultural heritage in local communities.

"Living" means the original function of the heritage is still working. The living state of the Lingqu Canal is obvious: the herringbone dam at its head, the water release balance, the steep gate, etc., which reflect the essence of the wisdom of the ancients and still play a role today. It is one of the oldest and most complete man-made canals in the world today.

After more than 2000 years, the Lingqu Canal remains open to shipping. It is one of the longest-used artificial canals in the world, still playing the role of irrigation, flood discharge, water supplement for Lijiang River, tourism, etc. Its functional value is still continuing and expanding.

In 2018, the Lingqu Canal was included on the World Irrigation Project Heritage List, the first in Guangxi. It still irrigates more than 43,000 hectares [106,255 acres or 430 square kilometers] of farmland on both banks, covering 5 townships and 186 natural villages in Xing’an County, and benefiting more than 59,000 people.