OPINIONS Is 2nd wave of COVID19 looming as clustered infections re-emerge in China?

Is 2nd wave of COVID19 looming as clustered infections re-emerge in China? 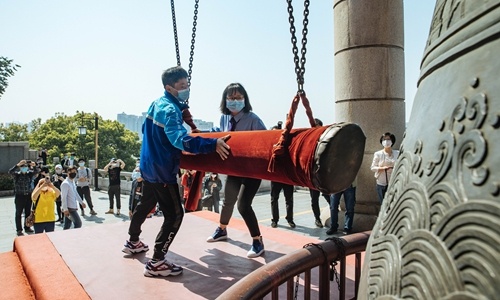 In a symbol of good luck, two people clang the bell at a reopening ceremony of Huanghelou, or Yellow Crane Tower, a Wuhan landmark which had been closed for 98 days due to the coronavirus. The tourist spot has put measures in place to control crowds and ensure visitor safety. (Photo: Li Hao/GT)

While clustered infections of the novel coronavirus or COVID-19 have re-emerged in two provinces, Chinese experts are reassuring the public over concerns regarding a potential second wave of the epidemic, calling such cases sporadic and normal for major infectious diseases.

China reported over 20 new infection cases in the past two days, raising fears that a second wave of the deadly coronavirus might appear in the Chinese mainland, which has successfully brought the epidemic under control through three months of hard work and is gradually resuming production nationwide.

After clustered infections emerged, officials from both Jilin and Hubei provinces are ramping up efforts to trace close contacts while adopting lockdown measures to contain the infection from spreading to wider regions.

Since Sunday, Wuhan reported a total of six new cases of COVID-19, all of which are from the same local community, Sanmin neighborhood in the Dongxihu district of Wuhan. The district raised its emergency response level from low to medium on Monday in the wake of clustered infections. Nearly 5,000 residents in the neighborhood were organized to take nucleic acid tests to screen viral infections.

On Monday, Shulan declared a full-scale "wartime" control mode in response to clustered infections where 13 confirmed cases have been reported. They citywide investigation of close contacts has traced 2005 people, 290 close contacts have been located and quarantined.

"These cases certainly do not mean a second wave of epidemic in China. Considering the complexity of COVID-19 which has an unclear incubation period and sometimes asymptomatic, such kinds of sporadic cases are quite normal," Wang Peiyu, deputy head of Peking University's School of Public Health, told the Global Times on Monday. He said that major infectious diseases gradually go through a process of disappearing.

Jin Dongyan, a professor with the School of Biomedical Sciences at the University of Hong Kong, believes that China may see sporadic cases of COVID-19 like what happened in Shulan for as long as several years into future, and this will become a new normal after the major outbreak.

"But this does not mean a looming second wave. We can call it a second wave once another outbreak as serious as Wuhan's previous outbreak occurs again in China," Jin told the Global Times on Monday. However due to it being highly infectious, a resurgence of COVID-19 is likely, Jin said, warning the necessity of remaining high alert.

Sporadic cases to continue for years

Wuhan reported five new cases of COVID-19 infection on Sunday in addition to one case a day earlier, all of which are asymptomatic infections from the same neighborhood.

The Sanmin neighborhood previously had 20 confirmed cases and investigations show the causes of the new clustered infections are mainly from previous community infection, according to local health authorities.

Experts and epidemiological specialists from the National Health Commission and Chinese Center for Disease Control and Prevention had arrived in Shulan on Sunday. All new confirmed cases were reportedly related to an infected laundrywoman who works in a local public security bureau but the source of her infection still remains unknown.

Yang Zhanqiu, a deputy director of the pathogen biology department at Wuhan University, told the Global Times that a few scattered new cases are normal after new infection cases in Wuhan dropped to zero.

Besides, residential community of Sanmin neighbor is not located in the main downtown area, Yang noted, shrugging off a high risk of large-scale community transmission.

The "wartime" control mode implemented in Shulan has pushed the lives of locals to come to a standstill again as local traffic has been heavily restricted, public transportation suspended, schools classes halted and restaurants shut down.

The newly emerged cases have touched the nerve of local people. Many locals in Shulan reached by the Global Times said they are prepared to fight a protracted battle against the virus.

Public health experts said that sporadic cases can be controlled after the infection chain is found, isolating those infected and those in incubation period.

Cities with sporadic cases don't need to adopt a "complete lockdown" as Wuhan did in January, but residential communities need to continue current prevention measures such as temperature check and tracking down those in close contact with confirmed or suspected patients, for a certain period of time, according to Wang.

Jin said that it's unclear how long COVID-19 will continue to exist globally. Some experts predict it will ebb next year, and some hold it will last for several years until effective vaccines are available. There are possibilities that even if a vaccine is developed next year, it may only work in preventing severe cases, instead of preventing infections among the people.

He said, thus it's likely that global infections will continue for years, and so will sporadic cases in China.

Chinese netizens hailed the timely measures the Shulan and Wuhan governments had adopted and called on local residents to keep their vigilance and continue to follow precautions.

"Taking immediate measures to fix problems. I now understand what professor Zhong [Zhong Nanshan] said, that we will not see another major outbreak once we've taken prevention and control measures," said a netizen.

The local government's timely measures including sacking an official have also aroused concerns that it may lead to low government administration efficiency, government officials and the public are overstrained and even work and life resumption may have to take a step back.

Zhang Yuxin, head of the Dongxihu district of Wuhan was removed from his post on Monday for failing to fulfill duties in regard to COVID-19 control in the residential community under his supervision.

Classes for students in the final year of middle school in Shulan were suspended after the city raised its emergency alert level to its highest on Sunday. Students in other grades had to postpone class resumption and continued their studies online.

Wang Hongwei, a professor at Renmin University of China's School of Public Administration and Policy, told the Global Times that we need to find a balance between COVID-19 prevention, control and restoring normal activities, as China's coronavirus prevention and control still faces great uncertainty and resuming work and production are vital to China's economy.

Finding this balance requires grassroots officials to effectively implement COVID-19 prevention measures, rather than treating it as a mere formality. And punishment should be conducted after a thorough investigation rather than just for the purpose to calm down public concerns, Wang said.

He said that proper and timely punishment against officials serve as a demonstration effect for other officials to improve their sense of responsibility, and the public should maintain a moderate level of concern to prevent any resurgence of COVID-19.

The punishment against the Wuhan official will also undoubtedly bring pressure to local officials across the nation, as preventing a resurgence of COVID-19 is a national task, experts said. But experts stressed that rigid and unscientific prevention and control measures may harm the resumption of production, and officials who fail to actively help companies resolve difficulties, provide the public a safe consumption environment and neglect their duties will be warned and punished.