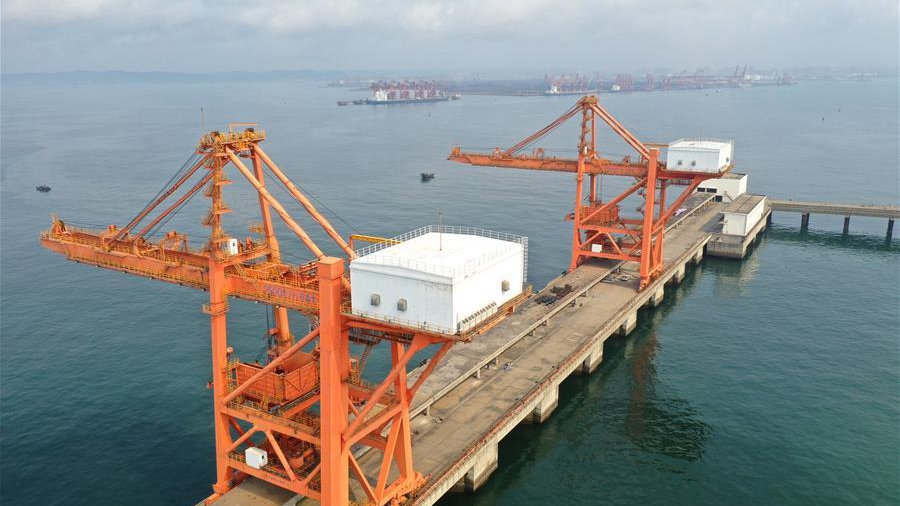 The main project construction of a wharf in Fangchenggang, south China's Guangxi Zhuang Autonomous Region, which has played an increasingly important role under the Belt and Road Initiative, April 11, 2019. (Photo: Xinhua)

As an English saying goes, "Birds of a feather flock together." So likewise, do investors. As such, successive waves of Asian economies take off, resembling migratory birds in flight, which is sometimes referred to as the "flying geese"model.

In my opinion, China's Belt and Road Initiative (BRI) will create a novel flying geese model. The flying geese model is described as a process where one economy can lead other economies towards industrialization, passing older technologies down to followers as its own incomes soar, and as it shifts into newer technologies – a powerful catalyst for industrial upgrading.

The past four decades have seen several notable changes in the Chinese economy. By the 2000s, China has turned out to be the leading worldwide exporter in 774 items and was ranked among the top five exporting economies for 1, 972 other items. More so, China's manufacturing boom is still unbroken – soaring nearly sixfold between 2004 and 2017 (from 625 billion to 3,591 billion U.S. dollars) and reaching one-quarter of the world's manufacturing value added.

Nevertheless, the explosive growth, at least until now, had been motivated primarily by low wage manufacturing of consumer products. But in recent years, it has changed because the cost of production in China's coastal factory belt started to soar. Hourly manufacturing wages have surged by 12 percent yearly since 2001, and productivity-adjusted manufactured wages almost tripled from 2004 to 2014.

As a result, China will have to move the industrial ladder, like Japan and South Korea did in the 1980s to 1990s – a "graduation" that will free up large manufacturing employment opportunities for lower-income economies, and mark China's conversion from a "flying goose" into what the former Chief Economist of the World Bank Justin Lin Yifu refers to as a "leading dragon" in its own right.

As a result, the Chinese government has to generate an extra incentive as a way of encouraging China labor-intensive firms to start shifting to less competitive locations via the "going global" strategy and the current BRI that has led to Chinese outward investment flow influenced by the "push factor" in China, plus the surge in actual manufacturing wages.

Relocating it advantages in labor costs and natural resources, China anticipates transferring more of its labor- and capital-intensive manufacturing to some nations along the BRI routes over the next couple of years, upgrading their industrial structure and improving their level of industrialization along the route.

As a result, a novel flying geese model will be established, but this time with China completely exploiting "economic complementarities" of nations along the BRI routes in the process as it establishes supply, industrial and value chains that promote regional economic integration. These investments would be "resources-seeking," as they aim to benefit from resources like labor and other inputs, which are available at lower costs in the host economies, especially African nations.

African nations are currently seen as a potentially attractive destination due to their largest pool of labor and low wages advantage. This is timely for Africa based on the fact that for the continent to keep up with its population growth, it needs to generate 20 million yearly employment opportunities.

So, as Chinese policymakers seek to identify and capture fresh economic opportunities in advanced manufacturing and tertiary sectors in more advanced coastal provinces, while relocating less advanced industries to other locations, African nations can use this opportunity to generate about 20 million jobs by taking advantage of the cross-country differences in timing of population aging.

And this is the reason why industrialization has been identified as one of the pillars of African Union Agenda 2063 that will drive social and economic structural transformation in the next five decades.

Ethiopia, for example, a former war-torn and famine-plagued nation at the beginning of the 1990s, but is now emerging as one of the fastest growing economies in Africa is making deliberate efforts to attract Chinese manufacturing investment by developing industrial zones with adequate, reliable infrastructure and improving the investment environment.

The Ethiopian government has set its eyes on transferring the nation into a middle-income nation by 2025, and into a leading manufacturing hub in Africa.

With that said, in terms of moving forward in China-Africa cooperation, the economical basis should shift to human resources to support African nations capture the relocation opportunity. China has less need for natural resources as its growth model changes towards consumption and services, and its workforce is destined to decline as a result of demographic trends.

Africa, on the other hand, is set for a workforce explosion. It could be a vital destination for Chinese investment, though getting to that positive result will need adjustment both on the Chinese and African side.