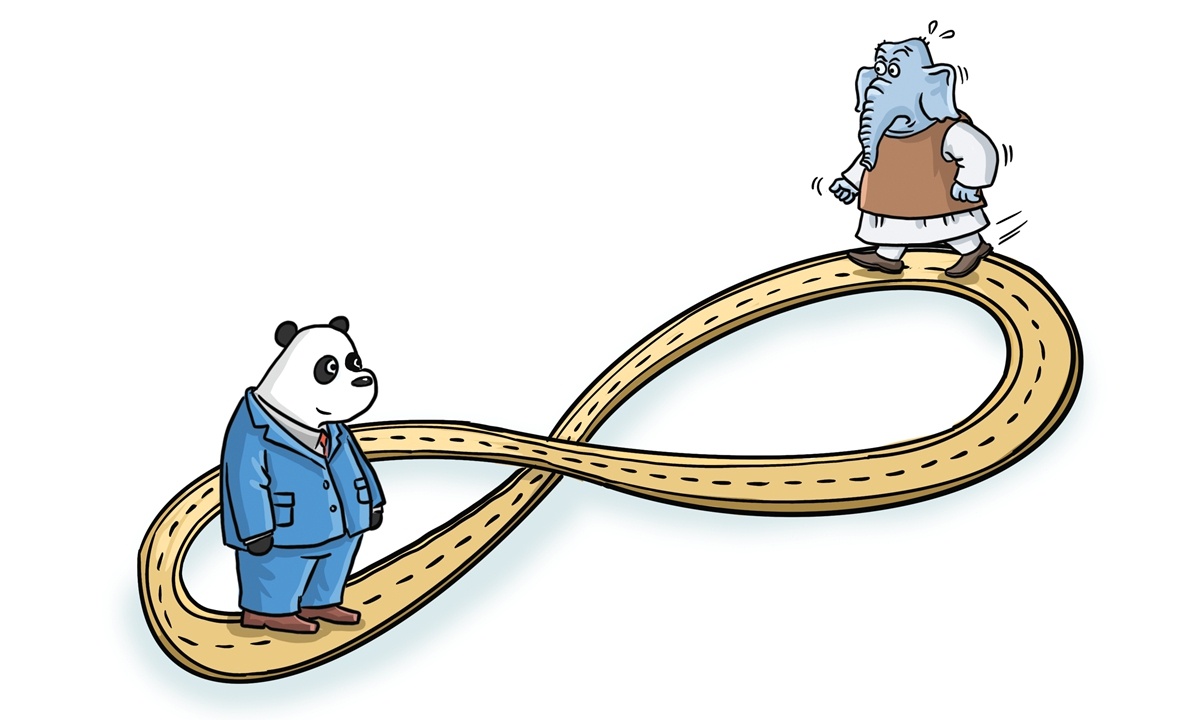 Chinese State Councilor and Foreign Minister Wang Yi spoke with Indian External Affairs Minister Subrahmanyam Jaishankar on the phone on Thursday. During the conversation, Wang mentioned that India has vacillated and even moved backward over its policy on China, which has affected and disrupted bilateral pragmatic cooperation and is in the interest of neither side.

He also said that mutual trust and cooperation between China and India is the right path for both countries. Jaishankar said the Indian side hopes to strengthen dialogues and consultations with China, and that India would act in a view of the long-term development and the panorama of relations with China.

After the intense standoff, there is bound to be a gradual de-escalation in China-India relations. However, the signal of détente from New Delhi is rather weak, and we need to make an accurate judgment of what this could mean.

During the border skirmish, Beijing displayed firm confidence and strength to safeguard its territorial sovereignty, and New Delhi realized that the confrontation with China on the border area put India in a very dangerous situation. Thus, disengagement could be seen as India taking advantage of this chance to extricate itself from this tense situation.

At present, there are some uncertainties between India and China that could affect bilateral relations. To begin with, whether restraint can be exercised along the border to avoid a repeat of last year's violent clash. If it happens again, China-India relations will suffer a heavy blow.

Moreover, whether India will continue its confrontational posture and actions with China remains unknown. India's foreign policy has undergone some substantial changes in the past years. The country has ganged up with some Western countries to contain and interfere with China's development. These actions have already caused a considerable impact on China-India relations.

China's attitude toward China-India relations has always been very clear. "We hope the Indian side will work with us to properly manage differences, promote practical cooperation, and get the bilateral relations back on the right track," said Chinese Foreign Ministry spokesman Zhao Lijian on January 29. However, India's attitude, along with its China policy, keeps changing. This makes it difficult to understand what India plans to do with China-India relations.

Whereas a Cold War mentality pervades India's strategic circles, some Indian strategists constantly urge the country to seek external enemies to achieve its own interests. The strategic community in New Delhi, in general, shares an aversion toward Beijing. On Wednesday, Indian Chief of Army Staff MM Naravane has described China as "having been in the habit of creeping forward, making small incremental changes." Words from politicians like this have undoubtedly increased uncertainties between the two countries.

Since the 2017 Doklam standoff, China-India strategic mutual trust has been severely damaged. It is hard to reestablish high-quality mutual trust between the two. China and India are neighboring countries, and history tells that there tend to be disputes between big countries. Whereas India's policy toward China is currently set on a wrong course, it requires New Delhi to profoundly change its strategy against Beijing before high-quality mutual trust can be regained. But this can hardly be realized in the short term.

Regardless of whether India wants to rebuild mutual trust with China, or to what extent it is willing to do so, China should take the lead to initiate better China-India relations. We shouldn't pin much hope on India, but instead we must accept the situation. We should try to improve the China-India relationship when there is an opportunity. But if there is no chance can be seen for now, we should keep calm and wait.

From this perspective, there are two pragmatic choices. First, differences should be well managed in order to avoid escalating the situation to a risky state like last year. Second, cooperation should be maintained in any area possible while interrupting or hurting each other should be avoided.

The author is deputy director of the Department for Asia-Pacific Studies at China Institute of International Studies.