OPINIONS Is sympathy too much to ask for from Western media?

Is sympathy too much to ask for from Western media? 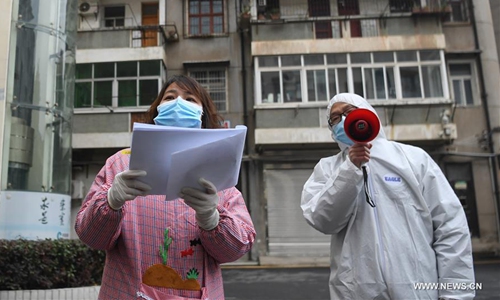 Community workers learn about residents' situation in Caidian District of Wuhan, Central China's Hubei Province, February 7, 2020. Wuhan, the epicenter of the novel coronavirus outbreak, is combing communities to ensure every confirmed or suspected patient is located and attended to. (Photo: Xinhua)

Chinese lives have undergone sudden changes as a result of the novel coronavirus epidemic. At the national level, Wuhan, capital of Central China's Hubei Province and the outbreak's epicenter, earlier announced a citywide closure to contain the virus.

Many provinces and cities have implemented harsh but effective preventive measures. People have been told to remain indoors, and in some places, only one member from each family is allowed to go outside to buy daily necessities every other day or longer.

In Beijing, residential communities have remained on high alert.

Entrance gates are closed all day, with the exception of one in my area. Those who do not live in the community are prohibited from entering. Delivery employees must wait for items to be received at the opening entrance gate. My friends who live elsewhere in Beijing said their communities had implemented the same rules.

Everyone in China is taking part in the fight against the novel coronavirus. People walking on the streets wear facemasks and those who don't are criticized by others. Office employees have been asked to work from home. Online courses are being offered either free or at discounted rates to students while schools remain closed. With each member of society making a contribution, the aim is to curb the spread of the virus, maintain order, and ensure that society functions as normally as possible.

During this period, daily inconveniences have emerged, and movement has been restricted, but we know that such measures and efforts are absolutely necessary for our own safety. It is with such endurance that we will defeat the virus. This is how the Chinese collective will plays out.

A recent Bloomberg report noted that China had sacrificed a province to save the world from the coronavirus. Not only has Hubei Province had to make great sacrifices, but Chinese from other parts of the country have shared the suffering of those in the province and made similar sacrifices.

While the nation fights through this hardship for both itself and the world, it is malicious for some Westerners to decry China's efforts without voicing sympathy and praise.

Reading through some Western media reports on China's fight against the outbreak, I could not find many encouraging and inspiring ones. Instead, I discovered discrimination and gloating.

Many of the reports made me feel as if every Chinese is living in despair and does not want to follow government measures, which have been referred to as human rights violations.  However, this is not the case. Fear or anxiety of people is not from the government measures, but from the outbreak itself, in contrast with several media reports.

A latest New York Times article points an accusing finger at Wuhan, after several similar reports. It said the tougher measures imposed by Chinese authorities, including house-to-house checks and putting the potentially infected in quarantine centers, has led to a humanitarian crisis.

When the European refugee crisis was underway in 2017, how did European leaders respond? The focus of their discussions was not aimed at the importance of saving lives, but how to reduce the number of people entering their country, undermining claims from the European Union as a standard-bearer for human rights.

With the situation got severe in China in general and Wuhan in particular, when heavy-handed measures were delayed and further social or world damage could arise, should the Chinese government hold a referendum to let the public decide? If so, the number of people infected would multiply compared with the current figures, which would have caused greater panic in China and around the world. By then, we could only anticipate harsher and more inhumane criticism from the West.

With Western rhetoric, human rights are about absolute freedom, including freedom of speech and movement. But it ignores that the most basic human right is the right to life.

While Western elites indulge in psychological egoism and partisanship, China tackles social problems by driving up collectivism. That's how we understand the current lockdown management imposed by residential communities and cities as a means to curb the spread of the virus. This is also the reason why Chinese are doing their part to help their country return to normalcy as soon as possible.

The Chinese do not want another province or city to be sacrificed. Before that happens, we must remain steadfast in achieving our goal. While Western countries cannot help, the least they could do is refrain from using a sarcastic tone when writing about how China and the Chinese are combating the virus.