OPINIONS Is the US-Japan honeymoon about to end?

Is the US-Japan honeymoon about to end? 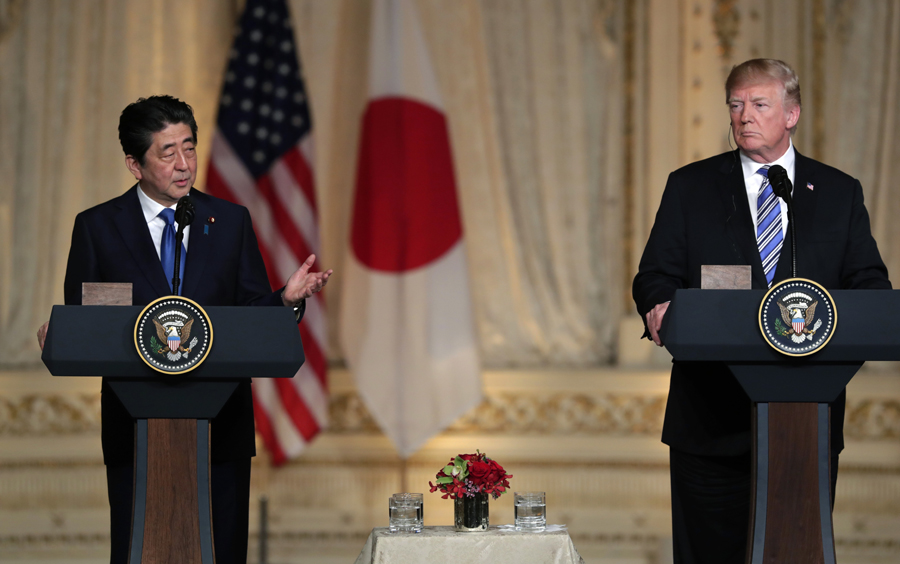 Japanese Prime Minister Shinzo Abe made it a point to meet with Donald Trump just after the latter was elected US president in November 2016 to build personal rapport with Trump and bring the two countries closer. Given the subsequent remarks of the two leaders, many believed Abe had succeeded in his endeavor.

However, Trump has taken a hard line toward Japan, even harsher than toward the US' other key allies in trade, demanding the US' trade deficit of about $69 billion with Japan in 2017 be significantly reduced. For Trump, the trade issue is non-negotiable, and therefore should be addressed by Japan.

While Trump has granted the European Union, Canada, Australia and Mexico tariff exemptions on steel and aluminum imports, he has not shown the same generosity toward Japan despite Abe's desperate efforts, and much to the Japanese leader's dismay. During his visit to the United States in April, Abe put tariff exemption high on the list of issues for discussion and used "golf diplomacy" to deepen what he thought was personal rapport with Trump so as to better serve Japan's national interests. Yet all these efforts were in vain, undermining Abe's authority in Japan.

Now, following in the steps of China and the EU, Japan is considering imposing tariffs on $409 million worth of US imports in response to Trump's tariff policy, Japanese public broadcaster NHK reported on May 17. This has raised speculation that the honeymoon between Tokyo and Washington may have ended, as Japan's retaliatory move against the US would diminish mutual trust and affect overall bilateral relations.

Nonetheless, saber-rattling Japan has been prudent and wary in its response, saying it is still considering whether to impose the retaliatory tariffs. But this can also be seen as a covert threat to the US, aimed at forcing Trump to concede Japan's demand.

For the US, the rebellion of its ally may lead to a chain reaction. If the EU and Japan indeed impose retaliatory tariffs on US products, they would deal a major blow to Trump's trade policies, harm the US economy and affect employment. This in turn would anger Trump's supporters and weaken the Republican Party's prospects in the mid-term elections in November. It could also diminish the authority of the US and compromise its status as a superpower. Besides, if Abe does impose the retaliatory tariffs on US imports, he could enhance his administration's prestige and give Japanese nationalists another moral victory to chew on.

Of course, Trump won't adopt a laissez-faire approach toward Japan's retaliatory move. He will most likely use more aggressive trade policies to subjugate Japan, or force it to make greater concessions to reach what he calls a trade balance.

Therefore, the trade dispute could bring the honeymoon between the traditional allies to a halt. But since the trade dispute will possibly ensue rounds of negotiations, threats and sanctions for some time, we have to wait and see which country has the last laugh.

(The author is a professor at and deputy director of Japanese Studies Center, China Foreign Affairs University.)