OPINIONS Is US facing recession? Real economy to decide

Is US facing recession? Real economy to decide 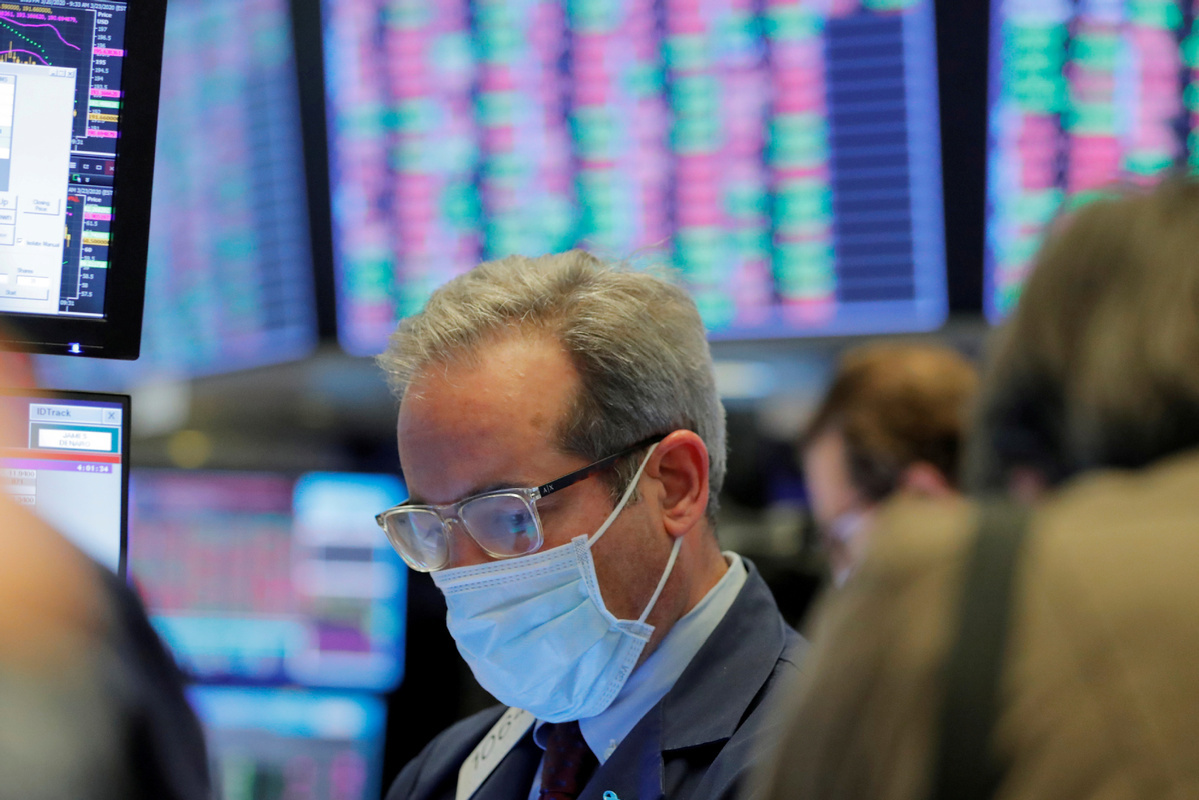 A trader wears a mask as he works on the floor of the New York Stock Exchange (NYSE) as the building prepares to close indefinitely due to the coronavirus outbreak in New York, US, March 20, 2020. [Photo/Agencies]

Editor's Note: Circuit breakers halted trading on the US stock exchange four times in 10 days last month with the stocks fluctuating wildly, and the Dow registering its biggest quarterly decline since 1987. Does this suggest a global financial crisis is imminent? Two experts share their views on the issue with China Daily's Liu Jianna. Excerpts follow:

Until pandemic ends, US stocks to be volatile

People even in their wildest dreams would not have expected the US stock exchange to halt trading so frequently. The volatility of the US stock market can be attributed mainly to the novel coronavirus pandemic. And the strong rally over recent days could be temporary.

As for when the stock market will bottom out, it depends on when the pandemic is contained, and at what cost. But the US administration should realize that more effective measures to control the disease, rather than the massive stimulus package it has announced, are more conducive to boosting stock prices in a big way.

It is true that the pandemic is the immediate cause of the stock market crash. But it is also true that the US administration kept blowing more air into the US stock bubble since 2017, which turned the equity market into a ticking time bomb. Also, the Dow Jones Industrial Average shot up 500 percent since 2008 while nominal US economic growth was only 45 percent.

If the stocks are grossly overvalued, investors are most likely to lose heart and trigger a sell-off spree the moment economic prospects start looking grim. In this sense, the pandemic is just a trigger for squeezing out the bubbles from the highly bloated market.

Besides, a slew of erroneous moves made by the US authorities, including the Federal Reserve's decision to cut the overnight bank rate to 0 at the bidding of the US administration to help raise stock prices, have backfired. The Fed's mistake of going with the administration, instead of fulfilling its due responsibilities, will not be forgotten by history.

How serious the upcoming recession will be depends more on the state of the US' real economy, and less on stock prices. Alas, the data for the fourth quarter of 2019 painted a rather gloomy picture, as consumption and private investment, two main drivers of the economy, contributed only 0.12 percentage points to GDP growth. As a result, it is widely expected that the first quarter of 2020 will see a negative GDP growth, to be followed by a further sharp fall in the second quarter.

Yet, compared with the slide in the real economy, the financial market crash would be more devastating, not least because many companies have issued bonds to buy stocks and a collapsing financial market would cause a chain reaction.

It is certain now that the world economy is slipping into a recession, the scale and extent of which would be worse than the 2008-09 global financial crisis, although this recession would be caused by the pandemic, not internal conflicts related to production as in 2008.

Moreover, monetary policies adopted by countries to save the stock and bond markets could have some side effects, albeit unemployment allowance, medical subsidies and other welfare benefits, as well as subsidized loans given to people, are conducive to boosting the real economy.

The scale, extent and influence of the recession depend on when the virus is brought to heel, instead of the various bailout policies. Worse, if the recession is severe, it could lead to a debt crisis that would spare neither developed nor developing countries.

The West, the US in particular, has for long used debt to pump up the economy, while leaving the real economy to stagnate. And this recession could well be a repeat of history.

According to the National Bureau of Economic Research, an economic recession is "a significant decline in economic activity spread across the economy, lasting more than a few months, normally visible in real GDP, real income, employment, industrial production, and wholesale-retail sales".

Still, the situation in Europe, too, should be taken into account before determining whether a global financial crisis is imminent. The financial bubbles in countries such as Germany and France are not so severe. Nonetheless, a crash in the US will drag Europe down, too, just like it did in 2008.

He Weiwen, a senior researcher at Chongyang Institute for Financial Studies at Renmin University of China

One thing is for sure, the novel coronavirus pandemic will bring about profound changes in the global economic landscape, with the frequent triggering of circuit breakers on the US stock exchange and wild fluctuations of US stocks being indicators of what lies ahead for the US economy.

But despite stocks making up about 70 percent of US household wealth, the declining stock market will hardly have an impact on American people's livelihoods, because many people only invest their "spare money" in stocks. And the recent high approval rating of US President Donald Trump somewhat attests to that fact.

It is difficult to say whether the US is heading toward a recession because much depends on the effectiveness of the government's prevention and control measures against the virus. Yet in the fight against the virus, the world is a community with a shared future, and since the global economy today is more deeply interconnected than ever, any attempt to decouple any two economies will be both foolish and an exercise in futility.

After all, joint efforts are needed to increase the growth prospects of all economies.

That some politicians and scholars in the US are smearing China and politicizing the pandemic is in no one's interest. The priority should be to control the outbreak, rather than blaming a country for it. And the fact that the G20 has reached a consensus on jointly fighting the pandemic and spurring the global economy is expected to boost global economic confidence.

Tao Wenzhao, a researcher at the Institute of American Studies of the Chinese Academy of Social Sciences