OPINIONS It remains urgent to eliminate racism amid COVID-19 pandemic

It remains urgent to eliminate racism amid COVID-19 pandemic 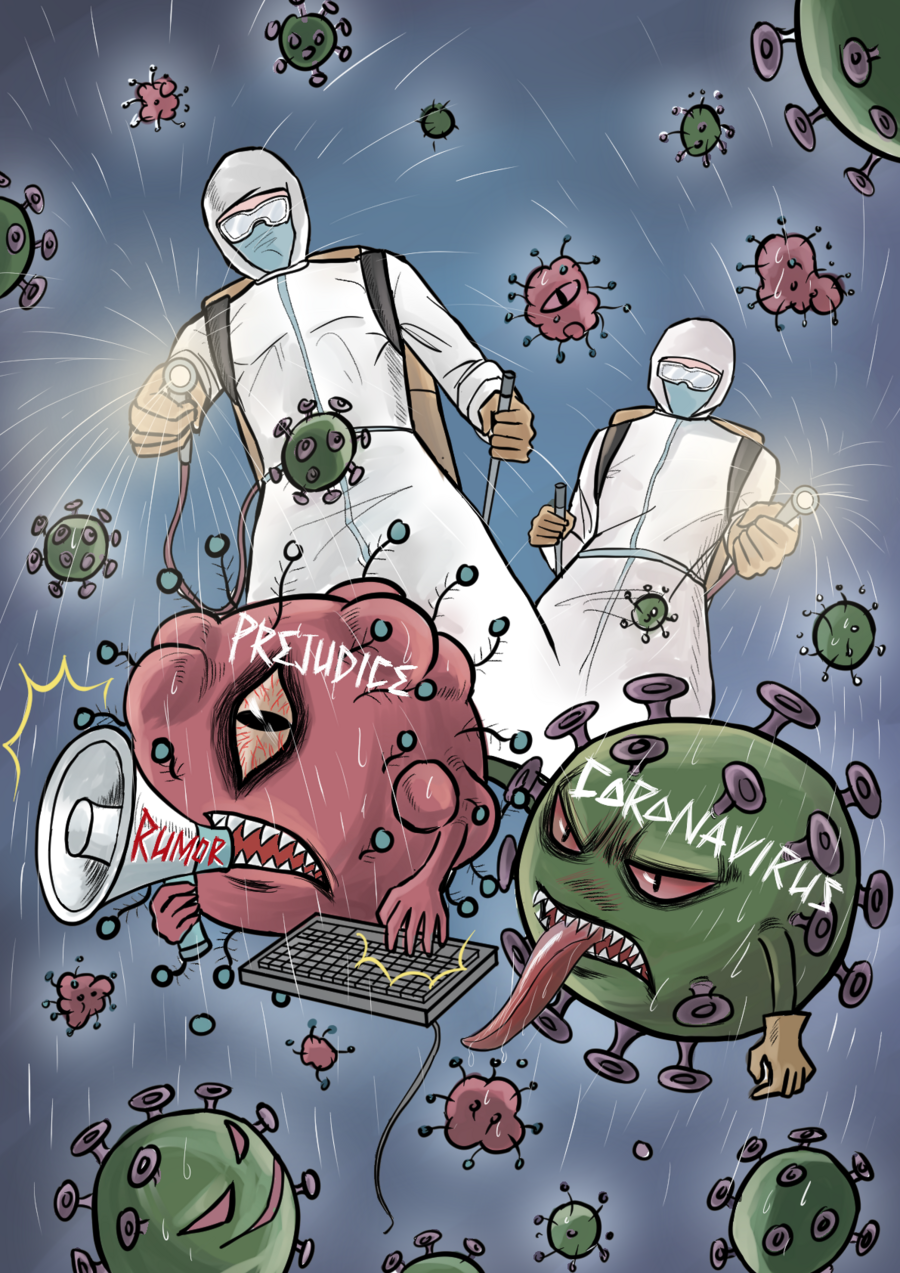 The themed cartoon shows people wearing protective suits are spreading disinfectant on both the novel coronavirus and the virus of prejudice which is disseminating rumors about the epidemic. (Photo: Xinhua)

A civilized society must have its bottom line, and that’s why there’s no time to delay uprooting racism from the earth.

In the global fight against the novel coronavirus disease (COVID-19), each and every one of us should take on our responsibilities as the exacerbating pandemic has already put human civilization to the test.

With the COVID-19 sweeping across the globe, mankind has come to a critical historical moment when solidarity is the only key to the victory over the virus.

While it’s clear to all that concerted efforts are the premise of the victory, some people are still acting in total disregard of the future and common interests of mankind, allowing their deep-rooted racism to repeatedly inject negative energy to the global anti-pandemic efforts.

Emmanuel Lechypre, a journalist of French BFM TV made discriminatory remarks when broadcasting a mourning activity over the COVID-19 victims in Wuhan on April 4. The journalist later received wide condemnation from netizens who said the remarks were racist, not “inappropriate” – a word Lechypre used to excuse himself.

Although Lechypre and BFM TV have both made public apologies, the damage still exists.

The ridiculous theories raised in Western countries since the outbreak of the COVID-19 revealed the conventional thinking powered by racism.

Attempting to label the virus and the pandemic in a racist manner, they called the coronavirus a thing “only for the yellow race”, and claimed that the novel coronavirus only attacks the immune system of Asians.

Such insensitive comments, while fully exposing the pride, prejudice, ignorance, and conceit of them, have instigated racist acts and xenophobia, and become public hazards of the world.

Opposing geographical, national, and racist labels for virus is a consensus among the mainstream international community as well as something that the world should always abide by.

It has been reiterated by the World Health Organization (WHO) that viruses know no borders, and they don’t care about people’s ethnicity, skin color or bank account.

The greatest enemy is not the virus itself but the stigma “that turns us against each other,” WHO Director-General Tedros Adhanom Ghebreyesus said on Feb. 15 at the 56th Munich Security Conference (MSC).

In addition, United Nations (UN) Secretary-General Antonio Guterres has on many occasions called on efforts to avoid discrimination, violation of human rights and stigma on innocent people just because of their ethnicity.

However, some Western politicians and media turned a deaf ear to these appeals and trampled on the bottom line of civilization by stirring up racial conflicts time after time.

The international community must stay vigilant against, severely condemn, and firmly resist such extremely irresponsible and immoral deeds at all times.

Racist prejudices would only cause barriers and harm, and racist remarks would only create tension and conflicts. Previous distress shall never be repeated.

The international community must be aware that as the pandemic spreads around the world, wanton stigmatization and well-planned smear out of ulterior motives have led to a rise in bullying, discrimination, and violence against the Chinese people and even all Asians.

Such backtracking is extremely dangerous and shall never be tolerated.

In the face of the epidemic that threatens all, far-sighted personages from around the world have frequently called for solidarity and opposed discriminatory and separatist deeds, expressing insistence on goodwill and justice.

“I’m sure anyone would regret profiling a virus along ethnic lines. That’s not something anybody would want,” said Michael Ryan, Executive Director of WHO Health Emergencies Programme at a press conference in March, stressing that the world needs joint efforts to fight the disease.

“Political rhetoric and policy that stokes fear and diminish the equality of all people is counterproductive,” Achiume said in a media statement last month.

Alan Macfarlane, emeritus professor of Department of Social Anthropology, University of Cambridge, said that as a history scholar and anthropologist, he firmly believes that one of the best ways to get in-depth knowledge about a society and its civilization is to see its attitude towards difficulties. What he said is thought-provoking.

“Major infectious disease is the enemy of all,” said Chinese President Xi Jinping on March 26 at the Extraordinary G20 Leaders’ Summit via video link in Beijing, noting that “This is a virus that respects no borders. The outbreak we are battling is our common enemy.”

“At such a moment, it is imperative for the international community to strengthen confidence, act with unity and work together in a collective response. We must comprehensively step up international cooperation and foster greater synergy so that humanity as one could win the battle against such a major infectious disease,” Xi said.

The remarks of Xi at the summit have won wide support and facilitated international consensus on making joint efforts to combat the epidemic.

It must be totally understood that in this global battle against COVID-19, no one can truly stay immune from the crisis and no deed that challenges universally-acknowledged truth shall be allowed.

Editor's note: Zhong Sheng is a pen name often used by People’s Daily to express its views on foreign policy.