Dr. Anthony Stephen Fauci, born December 24, 1940, is a renowned American physician and immunologist. Serving as director of the National Institute of Allergy and Infectious Diseases (NIAID), and one of the leading members of the Trump administration's White House Coronavirus Task Force addressing the COVID-19 pandemic in the United States, he is one of the world's leading experts on infectious diseases. During the early stages of the pandemic, The New Yorker and New York Times described Fauci as one of the most trusted medical figures in the United States.

As a physician with the National Institutes of Health (N.I.H.), Fauci has served American public health in various capacities for over 50 years and has been an advisor to every U.S. president since Ronald Reagan. He has made contributions to HIV/AIDS research and other immunodeficiency diseases, both as a scientist and as the head of NIAID at the N.I.H. Fauci is one of the world's most respected and cited scientists in scientific journals and and the science community globally.

His expertise and scientific background are beyond question, but he has been frustrated because his advice is constantly ignored. He has a clear understanding of the preventive measures needed and how to treat coronavirus patients, but his advice has not been implemented in its true spirit. Although he is sincere and loyal to the American people, unfortunately, his expert opinion has been cast aside, and the Trump administration has politicized the pandemic. 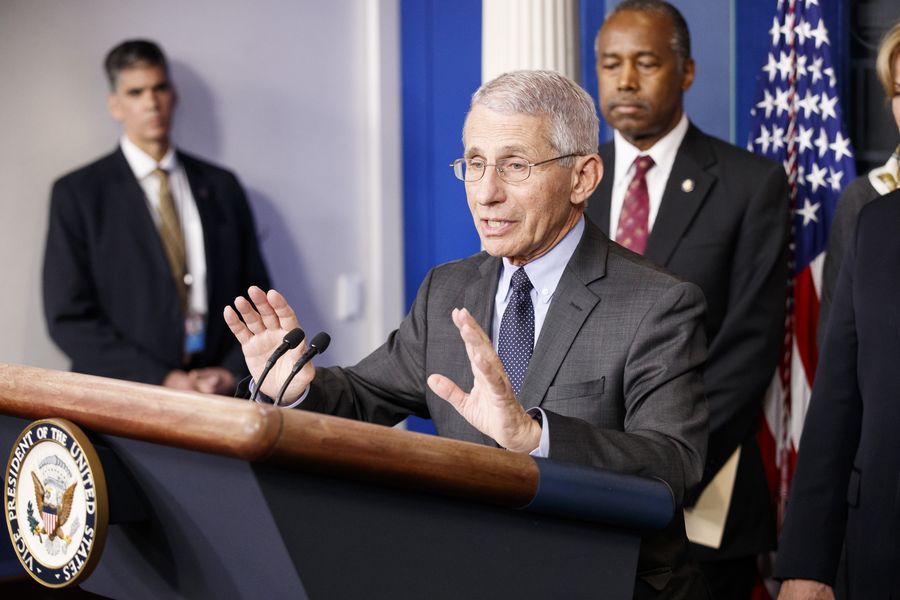 Anthony Fauci (front), director of the U.S. National Institute of Allergy and Infectious Diseases (NIAID), speaks during a press conference on the coronavirus at the White House in Washington D.C., the United States, March 4, 2020. (Photo by Ting Shen/Xinhua)

Describing himself as "quite exhausted," Dr. Fauci said that the disparities between the ways different states were handling the situation were keeping the country from bringing it under control once and for all. In 40 years of leading efforts against HIV, Ebola and other viral disease outbreaks, Dr. Fauci said he had never experienced the rancor that has colored the national conversation on the coronavirus, which he said "has taken on a political tone like nothing I've ever seen."

As a result, the U.S. has become the worst-hit country in the world, with the highest number of coronavirus cases: 5,529,789, and fatalities: 172,606. Meanwhile, President Trump continues to publicly give misleading statements regarding cure and preventions, against Fauci’s advice, which has led the nation into a great deal of suffering.

In fact, the Trump administration has not taken the challenges of the pandemic seriously and instead focused on seeking to gain political mileage out of the crisis. This is despite being supported by professionals like Dr. Fauci and many others, whose recommendations are based on scientific facts and could have played an instrumental role in fighting the pandemic.

In contrast, the Trump administration focuses on blaming, bashing, and trying to place responsibility on China in a bid to win compensation. It has all been politically motivated, while a media war has been launched and a narrative built against China.

Instead of addressing the core issue, the Trump administration has been fighting on the political front, and as a result, an immense number of lives has been lost. There were two approaches to fighting COVID-19: implementing a comprehensive lockdown, as China and some other countries have done, overcoming the pandemic with minimum loss of human lives, but heavy economic losses. The second approach is a liberal one, where people are left to make their own choice. Countries that followed the second approach suffered massive losses in human lives, but less on the economic front. To me, the most precious thing in this universe is human life, which once lost, cannot be recovered. Financial losses are reversible and can be won back through hard work and improved policies.

However, Pakistan opted for an innovative approach: the "Smart Lockdown," which resulted in minimal loss of human lives and slight losses on the economic front. The Pakistani model has been hailed globally as a role model for the rest of the world to follow.

The opinions expressed in this article belong solely to the author, and not necessarily to People's Daily Online.

Zamir Ahmed Awan is a senior fellow with the Center for China and Globalization (CCG) and a sinologist at the National University of Sciences and Technology in Pakistan. E-mail: awanzamir@yahoo.com