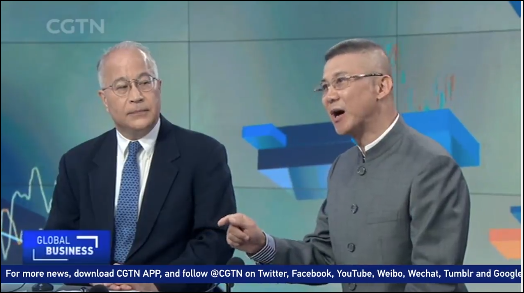 I have been on CGTN during three exciting times: on December 4, 2010 during the fights at the Asian Games, I was with Tony Jacklyn discussing China’s Golf Development – a less desirable topic then – and twice recently on the trade war during the World Cup games.

As a Canadian citizen I could be seen as a neutral choice to comment on the trade disputes between the US and China.

At first, many think tankers agreed that it’s just Trump’s media war for Republicans winning the midterm elections – less serious with all the wine and dine. But, Trump has seemed to win suddenly on both the media war and trade war. During his campaign talk yesterday, Trump was very confident, saying, “We are in a great position… We have all the cards…”

Yes, it is true that Trump’s approval rating is up. The president, chief commander of war, cares mostly about his staying power and winning re-elections.

Trump has a bestseller book "The Art of the Deal" in which he tells his business advice-seeking readers to "know your market" and "get the word out." And that's what's he is doing now and perhaps he should consider produce any book called "The Art of a Media War." Trump clearly knows his way around diverting attention and promoting his public image.

The friendship he bragged about with Chinese President Xi Jinping last year and his "Nobel prize claiming" meeting with Kim Jong Un are all his cards that he played nicely to win leverage against the competition with the Democrats. A trade war with China can be a perfect diversion to his domestic political crisis – Trump hit China with tariffs on 50 billion US dollars' worth of Chinese goods the second day the former Playboy model Karen McDougal confirmed with CNN that she had an affair with Trump before he became the president.

However, Trump’s trade war is hurting the whole world including Americans – consumers as well as manufacturers. Many Chinese exports to China are actually from foreign companies or joint ventures running in China. So Trump might miss the real target and punish US multinational companies.

In 1964, then US President Lyndon Johnson imposed 25 percent tariffs on light trucks, in response to France and West Germany's tariffs on US chickens, which still remain in effect today. The "Chicken Tax" did in some way protected America's domestic car market, but it also seriously impeded the competition of light truck industry and raised prices.

History will ask, how did the Americans let Trump do this – just like how did the Germans allow Hitler to do what he did. There are only a few rednecks on the Rust Belt, how can the good Americans support Trump on this?

I sincerely hope the American Tankers, like Rick Dunham and other experts, can wake up those short-sighted Republicans and stop Trump’s campaign madness. Politicians, good or bad, come and go. The American people originally came from all parts of the globe and can enjoy the peace and prosperity of globalization. Competition can be healthy with WTO rules, like the war on soccer or volley fields.