Recently, Italian fashion brand Dolce & Gabbana sparked anger in China and from people around the world when it launched a controversial marketing campaign on social media to promote a major fashion show in Shanghai. The campaign featuring a Chinese woman struggling to eat Italian food with chopsticks was met with disgust by many Chinese and prompted accusations of racism and racial stereotyping.

Rather than reflect on the huge backlash to the so-called "love China" marketing campaign, Stefano Gabbana tried to brush it off and push the blame away from D&G and toward China, which only added fuel to the fire.

This led to a slew of reactions on Chinese and overseas social media, and designers Domenico Dolce and Stefano Gabbana issued a video offering their "sincerest apologies" and apologizing for their "misunderstanding of Chinese culture." However, the apology has failed to quell the anger.

More recently, many Chinese have taken to social media to shine a spotlight on the culture of chopsticks. For example, one user on Twitter wrote that she wants to see an apology video by D&G that shows how to properly use chopsticks and explains the cultural meaning behind them.

Another Twitter user also highlighted the importance of chopsticks in Chinese culture, writing that while China is a friendly and civilized country, D&G insulted people across China by poking fun at Chinese culture.

This reaction has led to the creation of a short video that has gone viral on Chinese social media. The popular video explains the cultural meaning behind chopsticks. Below is a translation of the video with some added words for clarity. 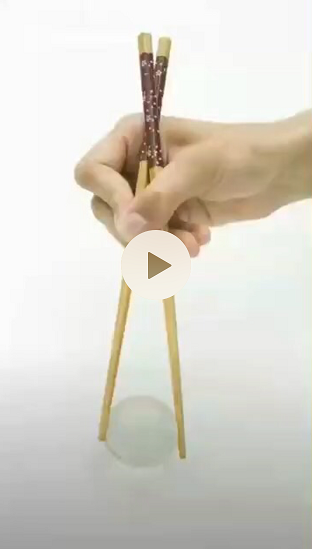 The video begins by pointing out that chopsticks have a long history in China. In fact, Chinese people have been eating with chopsticks for about 4,000 years. When Chinese were using chopsticks thousands of years ago, where was Rome or Italy?

Traditionally, the standard length of a Chinese chopstick is 7 cun and 6 fen. One Chinese cun is equal to 1.312 inches and one Chinese fen is equal to 0.1312 inches. Therefore, the standard length of a chopstick is 9.97 inches in length. The meaning behind those numbers is that all human suffering is believed to be caused by seven emotions (i.e. happiness, anger, sorrow, joy, love, hate, and desire) and six desires (i.e. pleasures derived from the senses: eyes, ears, nose, tongue, body, and mind). Thus, eating with chopsticks becomes a way of controlling them.

The movement of chopsticks should be elegant, creating an effect that combines stillness and motion. When Chinese grab their chopsticks, their thumb, index finger, and middle finger form a trinity that represents the three great powers in nature: heaven, earth, and man—a key concept in Chinese philosophy.

As you can see, these two "things" are much more than simple eating utensils; they represent a key part of life for a 5,000-year-old civilization. Chopsticks are a fascinating application of the principle of leverage. They embody Chinese wisdom and the profoundness of Chinese traditional culture and they are a great invention, because they enable people to eat hot food, which is believed to promote Yang in the human body/which is good for the health. These small sticks are dynamic and static like Yin and Yang, round like heaven and square like earth, and an integral part of Chinese culture.

Some might wonder what all the fuss is about. For example, a China correspondent for the BBC reacted to the news by writing that "everyone in China" is being overly sensitive, suggesting that the core of this problem lies with the Chinese people and not D&G.

But what D&G did with their marketing campaign on social media is turn an important Chinese traditional value into a joke to sell more high-end luxury items. In the eyes of Chinese, D&G attacked the very core of what it means to be Chinese, and people across China responded accordingly. To try to brush it off as just a big fuss over nothing just feeds into the ignorance that caused this mess in the first place.