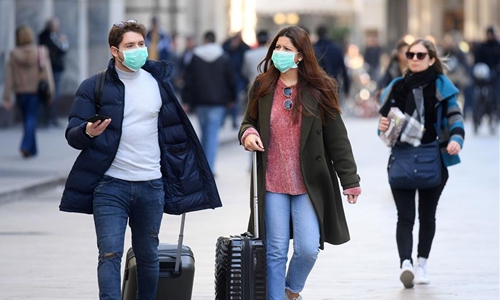 Italy had only a few cases of COVID-19 between the end of January and February 18 but in one week it recorded 374 cases, becoming the country with the highest number of infections in Europe. Is this situation emerging in Italy because we started to diagnose cases and run tests? This is what the Italian leader says.
After the quick explosion of cases, between February 20 and 23, Italian authorities are taking a series of measures to contain the infection. The most important is related to those who have returned from China and must remain in quarantine for 14 days (although there have been longer, albeit rare, incubation periods). Lombardia, Veneto and the other Northern regions involved have closed schools and suspended public events.
Then there are the so-called red areas, those of the outbreaks, in which you cannot enter and from which you cannot exit: a new decree-law issued on February 22 involves 11 municipalities. Another decree allows companies in the red areas to make their employees work remotely from home. New economic assistance measures are ready to be issued.
While we did not systematically check the presence of the virus in the first month (on January 30 WHO announced "public health emergency of international concern), we spent time criticizing the Chinese government and talking about democracy. We spent time talking about the Chinese delays (two weeks) and flaws in China's political system, instead of getting an objective evaluation of the situation.
I found myself forced to analyze the efficiency of Chinese prevention and control measures, implemented in China, explaining also the functioning of its political system to Italian media. It is sad that now people ask, why was there a sudden increase of contagiousness in just a few days? Maybe because we are looking for it? It is sad to ascertain that now our experts and journalists justify this situation, saying it is difficult to identify the virus because it has similar symptoms to a seasonal flu and because we still do not know enough about it.
This was true, a fortiori, in December, in Wuhan. The latter is the main reason why Chinese measures were not perfectly on time and prepared in the beginning, because they did not have enough knowledge (read evidence) to block an entire country, and do not forget the magnitude of Chinese demography. Meanwhile, many in Italy said, "thinking about implementing a lockdown of cities in Italy, a popular rebellion would explode."
Again, they did not understand why it could be necessary, under-evaluating the situation and the scientific advice. Now we know a little bit more about the virus, so we are less justified in our lateness than China two months ago and more.
It seems that here in the West, including Italy, we have learnt little from the Chinese epidemic emergency. After two months of empiric elements coming from China and after one month of the WHO-declared international emergency. Is it the old mechanism where China learns from the West, while we are still reluctant to do the same from China?
The debate in Italy is confusing. While the government is moving in the only possible direction - new control systems, still insufficient and new quarantine measures etc. to cut infections as China has been doing, with the support of international scientific analysis of the situation, we still have contradictory opinions from Italian experts.
Some still insist on saying COVID-19 is similar to normal flu. It is not, for lethality rate (20 times more than seasonal flu), for contagious speed, also in asymptomatic people, for virus resistance, for percentage of medical complications etc.
It is also unreasonable to neglect the importance, as is happening in Italy, of wearing masks and gloves. From the beginning, China experienced that this virus can be transmitted also when you do not have symptoms. In addition, some of our experts confirmed it, but science cannot provide all the answers yet. Science is limited, this is the reason we need precautionary measures.
I do not want, in any way, to discuss those aspects as it is not my field. Nevertheless, we know from Chinese experience that draconian measures are the only way to contain and defeat the epidemic situation - lauded by WHO and most world experts.
I want to say again that in spite of Italian public opinion confusion, oscillating from no panic to scaring messages, also with the contradictory approaches of different experts; the Italian government is trying to do its best, according to what is coming from the scientific community. However, our power structure and institutional framework, does not help to implement draconian measures in a coordinated and efficient way.
In a recent video clip, I prepared a message in solidarity with Chinese people, concluding, "We are all Chinese." Now, I will wait, Chinese friends supporting us and saying, "We are all Italian."
Simply, we should more correctly remember that "we are all human beings" and bear in mind that scientific knowledge is human as well, that is limited, perfectible and falsifiable. Do you remember Karl Popper? There is no such thing as scientific absolute truth.
Take care, be prudent and support each country's authority!