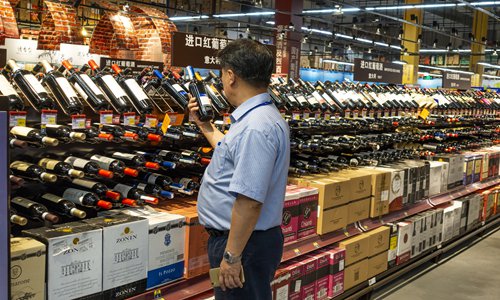 A consumer buys wine imported from Italy in a supermarket in Shanghai in June 2018. (Photo: VCG)

Joining the China-proposed Belt and Road Initiative (BRI) will be a wise choice for Italy as an effective way to stimulate its economic growth, benefit third markets along the routes of the BRI, and attract more EU countries to the initiative in the future, experts said.The remarks followed a report by the Financial Times on Wednesday saying that Italy is "set to formally endorse" the BRI and sign a memorandum of understanding (MOU) with China to take part in the initiative."We want to make sure that 'Made in Italy' products can have more success in terms of exports to China, which is the fastest-growing market in the world," said Michele Geraci, an undersecretary in Italy's economic development ministry, said the report.If Italy signs up, it would be the first Group of Seven member to so. Italy, the eighth-largest economy in the world, will also become the largest to join the BRI by far, the report said."If the news is confirmed, it would be a wise choice for Italy, since the move will not only enable its products and companies to have easier access to China's market - it will also create more job opportunities with Chinese companies' entry in the future," Liang Haiming, dean of the Hainan University Belt and Road Research Institute and chairman of the China Silk Road iValley Research Institute, told the Global Times on Thursday.The European country has been under pressure from mounting debts and slowing economic growth. Rising Chinese enterprises might be able to stimulate its economy, which the US and other EU countries have failed to do, Liang added.From 2000 to 2017, China's total investment in Italy reached 13.7 billion euros ($15.49 billion), making it China's third-largest investment destination in the EU, after the UK (42.2 billion euros) and Germany (20.6 billion euros), according to the website of the Ministry of Commerce, citing a report from Italian economic newspaper Il Sole 24 Ore. There are more than 600 Chinese-funded enterprises in Italy, with a turnover of about 18 billion euros and more than 30,000 employees.According to Liang, foreign investment of $100 million could bring more than 1,000 job opportunities to the local market."Within the BRI framework, and an increasing bilateral relationship, we will consider expanding our engagement in Italy, and will set out to hire more local people once the project starts to operate," said Ye Hui, executive general manager of Shanghai's Zhenhua Heavy Industry Corp (ZPMC).ZPMC, the world's largest manufacturer of port machinery, has been engaged in a smart port program in Italy since 2016, and Ye said the program is proceeding quite well, with completion expected by the middle of the year."We are also willing to share our experience in infrastructure construction, as well as equipment production. That would be quite helpful for the developed European countries, whose infrastructure facilities have been aging," Ye said. "The only problem that bothers us is some of our engineers who are sent to Italy to train local workers have had some difficulty in getting work visas. We hope the problem could be solved," he noted. The increasing bilateral relationship could also boost tourism connections between the two countries, which has been sought by the Italian side, experts said. In a recent interview with the Global Times, Ettore Francesco Sequi, the Italian Ambassador to China, said that the two countries have broad cooperation scope in the tourism sector. The country established 11 new visa centers in China in 2016, and Chinese tourists can get now a visa within 36 hours.A report from the China Tourist Academy said that Italy is among the most popular destinations in Europe, second only to Russia. Official figures also showed that in 2018, the number of visas issued by Italy in China increased by 15 percent, and the number of tourists from China reached 1.8 million.Further cooperationExperts predict that under the framework, the two may also seek cooperation in third markets along the BRI routes, which could reduce risks, avoid competition, and bring more opportunities and high-quality investment to economies along the routes."We have already set foot in areas such as Africa, Latin America and Southeast Asia, and we are looking forward to cooperating with Italy in those areas also. We'd like to share our existing resources there, taking full use of both our advantages there," Ye said."With the participation of Italy, more developed countries will join," Liang said.A number of EU states have signed MOUs with China, including Croatia, the Czech Republic, Hungary, Greece, Malta, Poland and Portugal, said Reuters."Those who still hesitate to participate and remain absent from the initiative may find it's a loss for them," said Liang.