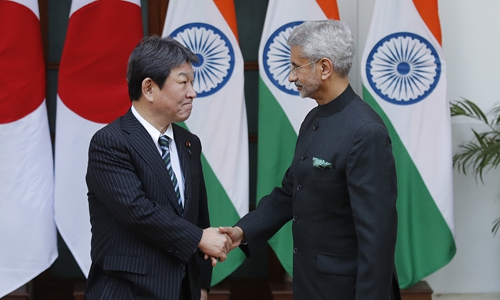 The first India-Japan 2+2 Foreign and Defense Ministerial Meeting, held in New Delhi on November 30, marks a crucial step in the advancement of the bilateral relationship, indicating that a honeymoon period between the two Asian powers has begun. The first such meeting makes Japan the second country to hold a 2+2 dialogue with India after the US. India became the seventh country to have a 2+2 dialogue with Japan.
The talks hovered around three categories.
First, when it comes to issues that are highly relevant to one another but have little bearing on one's own interests, they fully support each other. For example, they called on North Korea to realize a "complete, verifiable and irreversible" denuclearization, condemned the latter's recent launches of ballistic missiles, and urged North Korea to resolve the abduction issues at the earliest date. Both countries called upon Pakistan to take resolute and irreversible action against terrorism.
Second, Japan and India emphasized their bilateral defense cooperation. "The ministers shared the view to make continuous efforts for holding the bilateral exercises between the defense forces regularly and further expanding the same," said the joint statement issued after the meeting. Both sides undertook an appraisal of ongoing negotiations of Acquisition and Cross-Servicing Agreement (ACSA) which is anticipated to be signed during the annual India-Japan summit between Japanese Prime Minister Shinzo Abe and Indian Prime Minister Narendra Modi later this month. This agreement will allow logistical support between the Indian military and Japan Self-Defense Forces, including fuel, ammunition and so on. They also agreed to have the first India-Japan joint fighter aircraft exercise in Japan, and strengthening cooperative research on unmanned ground vehicle (UGV).
Third, in terms of the South China Sea and the Indo-Pacific region, India and Japan exchanged views and backed each other's stance. Their joint statement states that "the Japanese side appreciated India's announcement of 'Indo-Pacific Oceans Initiative'… to create a safe, secure, stable, prosperous and sustainable maritime domain" and "the Indian side welcomed Japan's 'Vientiane Vision 2.0' in November 2019 as an updated initiative for defence cooperation between Japan and ASEAN." Besides, they also welcomed trilateral cooperation with the US, as well as the Japan-India-Australia-US Foreign Ministerial consultations in New York in September. They would like to share intelligence and information on the Indo-Pacific region with these allies. In addition, four ministers of both countries reaffirmed that the freedom of navigation and overflight in the South China Sea needs to be protected, and disputes in this area should be resolved according to the international law and the United Nations Convention on the Law of the Sea (UNCLOS).
It is believed that substantive outcomes were reached in this 2+2 meeting, which not only strengthened their bilateral defense cooperation, but also laid a relatively solid foundation for the upcoming annual India-Japan summit to be held in India. Since the establishment of the India-Japan Annual Summit in 2007, this will be the 14th summit between the prime ministers of both countries. As the second and the third biggest economies in Asia, having a closer relationship is an inevitable trend. This is because, on one hand, closer relations meet the strategic needs of both countries, while on the other, their cooperation is encouraged by the US while the three are all vigilant against China.
During the Cold War era, there was neither cooperation nor confrontation between India and Japan. However, interactions between the two began in the 21st century. From politics and economy to security, a broader engagement has developed. They established the Japan-India Strategic and Global Partnership in 2006, which was upgraded to Japan-India Special Strategic and Global Partnership in 2014. Their relations stand out among Asian countries.
As Modi said, India-Japan relations are the "vital pillar" of India's Act East policy and "there is much room to grow" in their ties, the Japan Times reported on December 1.
Unlike China-India or China-Japan relations, there are basically neither historical feuds nor significant conflicts of interest between India and Japan. This provides the basic conditions to develop long-term India-Japan relations.
The interdependence and mutual interests between India and Japan are the driving forces for their relations. Politically, they are both eager to become leading world powers. Economically, Japan is a major power, while India is an emerging economy and one of the most populous countries. In the future, India's economic reform will provide more room for cooperation with Japan.
Although there have been marked improvements in China-India and China-Japan relations, the biggest concern for Japan and India is still how to balance the power structure in Asia, especially as China is rising rapidly and the US is emphasizing "America First." This encourages closer relations between Japan and India, which can be seen from Japan's reaction to India's withdrawal from the Regional Comprehensive Economic Partnership (RCEP).
On November 29, Hideki Makihara, Japan's deputy minister for economy, trade, and industry, said that Japan will not sign the trade deal without India, which shows Japan's determination to stand with India. The reason behind Japan's decision is its fear of losing a big market like India and the increasing influence of China in the partnership. Therefore, it is likely that Abe may try to persuade Modi to rejoin RCEP in the annual India-Japan summit this month.