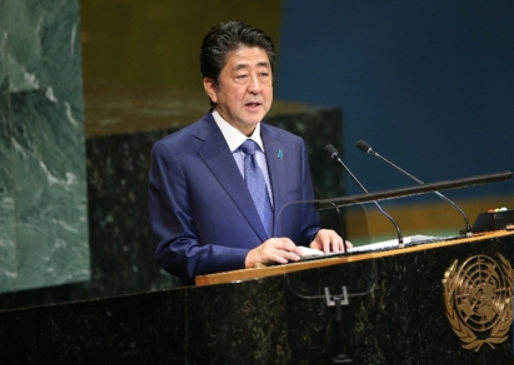 Japanese Prime Minister Shinzo Abe kicked off his five-day visit to Saudi Arabia, the United Arab Emirates and Oman on Saturday, seeking to reduce tensions in the Middle East through negotiations. The country's Self-Defense Forces (SDF) left Japan to guard ships to the Middle East on the same day.

The region has been in ferment after a US targeted strike killed Iranian major-general Qasem Soleimani following which Iran fired a barrage of missiles at US bases in Iraq. For security reasons, some people in Tokyo called for halt to deployment of the SDF in the Middle East. Abe was also unable to make up his mind on putting off his visit.

Now Japan's diplomatic and military moves are proceeding as scheduled, not due to the independence of Abe's foreign policies, but because the US decided not to take military revenge on Iran and showed strategic restraint, which gave Tokyo the courage to engage in Middle East affairs.

Amid tensions between Washington and Tehran, Tokyo has been trying hard to mediate. But going by the current situation, its diplomacy hasn't proven effective.

In June 2019, Abe visited Iran to play the role of a mediator, the first visit to the Middle Eastern country by a Japanese prime minister in 41 years.

In December, Iranian President Hassan Rouhani paid a visit to Japan in a bid to deepen bilateral economic exchanges and build a diversified economic structure.

Diplomatic relations between Japan and Iran are over 90 years old; the US-Japan alliance has also lasted for more than half a century. Tokyo is thus a good choice to serve as a mediator between Washington and Tehran.

However, when Soleimani was killed in US drone attacks and Iran then retaliated by attacking US bases, Japan neither condemned the reckless action of the US nor criticized Iran's military move, which showed that Japan was put in an embarrassing position.

Against such a backdrop, Abe's visit to the Middle East and the SDF's operations are a face-saving move. His trip is unlikely to see any breakthroughs.

The Middle East's stable supply of energy is of great significance to the entire world. For Japan, which has a small territory and lack of natural resources, it is even critical. According to Japanese Ministry of Economy, Trade and Industry, 88.9 percent of Japan's crude oil was imported from the Middle East from January to May 2019. The vast majority of crude imports from the Middle East have to transit through the Strait of Hormuz.

In recent years, although Japan has devoted itself to diversifying supply sources, the Middle East remains Japan's major and long-term source of oil. Therefore, even a little change in the Middle East situation may have a butterfly effect on Japan.

Although it is difficult for Japan to reconcile the US-Iran conflict, the Japanese government will not easily withdraw from the Middle East. Therefore, the Abe administration's deployment of the SDF to the Middle East has become a key part in its engagement in the strategically important region's affairs, which can not only ensure the safe transportation of crude oil out of the Strait of Hormuz, but also help increase Japan's influence in the region.

Tensions in the Middle East involve not only the US-Iran conflict and inherent regional contradictions, but also deeper issues. Japan, as an outsider in the region and not politically powerful, is unable to resolve them alone.

Abe's trip aimed at mediation and his efforts to ease the situation are laudable. But the effect will be limited. It can hardly persuade stakeholders to shift their positions.

The key to defusing the crisis in the region is to abide by the UN Charter, settle the issues through politics, practice multilateralism, and build a common, comprehensive, cooperative, and feasible regional security framework.

It is hoped that Abe's administration will work in such a general direction instead of simply focusing on resolving the contradictions between Washington and Tehran - this can only cure the symptoms, not the disease.