OPINIONS Japan pulls away from US amid Russia pivot

Japan pulls away from US amid Russia pivot 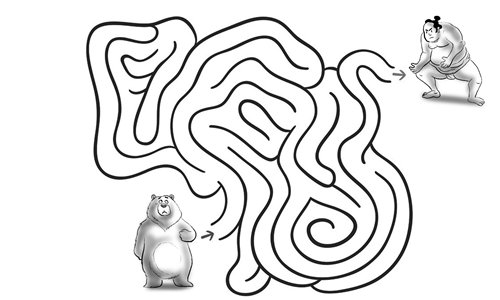 The recent summit between Japanese Prime Minister Shinzo Abe and Russian President Vladimir Putin in Russia did not make progress on the territorial dispute. Abe visited Russia on May 24-27 and attended the St Petersburg International Economic Forum 2018, besides holding talks with Putin in Moscow. The two leaders agreed to speed up joint economic activities on the disputed chain of islands, hold the next round of the so-called two-plus-two talks involving their foreign and defense ministers in the second half of this year and hold talks again in Vladivostok at the Eastern Economic Forum in September.

Abe and Putin have met 21 times and the latest summit came when both leaders have consolidated power at home. Abe dissolved the lower house of parliament in late September last year and won the snap election, which gave him a chance to lead Japan through 2021. Despite a slump in the approval rating of the Abe cabinet, nobody, be it from the ruling Liberal Democratic Party or the opposition parties, is able to now challenge Abe's authority. Putin started another six-year term after he won presidential elections in March. Given the stability of the Abe and Putin governments, the bilateral policies will continue to be steadily implemented. This will help promote bilateral relations and will also contribute to the prosperity and stability of Northeast Asia.

Japan-Russia relations have long been seen to have one of the greatest potentials in academic and political circles. There is much to be tapped in the economic and trade fields. With a vast territory, abundant resources and a strong industrial foundation, the Soviet Union was once the second largest economy in the world. However, due to historical and demographic factors as well as Western sanctions, the development of the Russian economy has been barely satisfactory.

Shortly after he was sworn in as president in May, Putin put forward a strategic goal to rank Russia among the world's five biggest economies by 2024. Although relations between China and Russia are at their best in history and the two have witnessed deepening economic and trade exchanges, the role of Japan is also indispensable.

Likewise, Japan has a demand for Russian energy. About 80 percent of Japan's imported crude oil comes from the Middle East. If Japan can import a massive amount of crude oil from Russia, it will reduce not only cost, but also dependence on the Middle East.

The Japan-US alliance is still a formidable factor impeding the deepening of Japan-Russia relations, but will have less influence under the Trump administration. The alliance has a history of more than half century and will not collapse easily in the short term. However, Japan is increasingly seen to be pulling away from the US and seeking diplomatic independence. One prominent example is provided by then Japanese prime minister Junichiro Koizumi visiting Pyongyang in 2002 without informing the US. The Abe government has been seeking to amend the constitution to make Japan a "normal country."

As Trump didn't include Japan in the list of countries exempted from tariffs on aluminum and steel imports and expressed unease with the trade deficit and imported car tariffs from Japan, the two countries have the possibility of clashing over economy and trade.

Meanwhile, the uncertainty of Trump's foreign policy, for instance, his waffling over the summit with North Korean leader Kim Jong-un, exacerbated the dissatisfaction of the Abe government. It's believed Abe will in the future pay less heed to Trump's policies regarding ties with Russia.

If Japan-Russia relations can maintain the current momentum of rapprochement, the two countries are expected to sign a peace treaty in the next three years. Nonetheless, there will be no major progress on the territorial dispute. After all, handing over the Kuril Islands, known as Northern Territories in Japan, to Tokyo means a denial of the Potsdam Proclamation. This will fuel Japan's historical revisionism.

The improvement of Japan-Russia relations can come about gradually. It remains to be seen whether the deadlock can be resolved within the tenures of Abe and Putin.