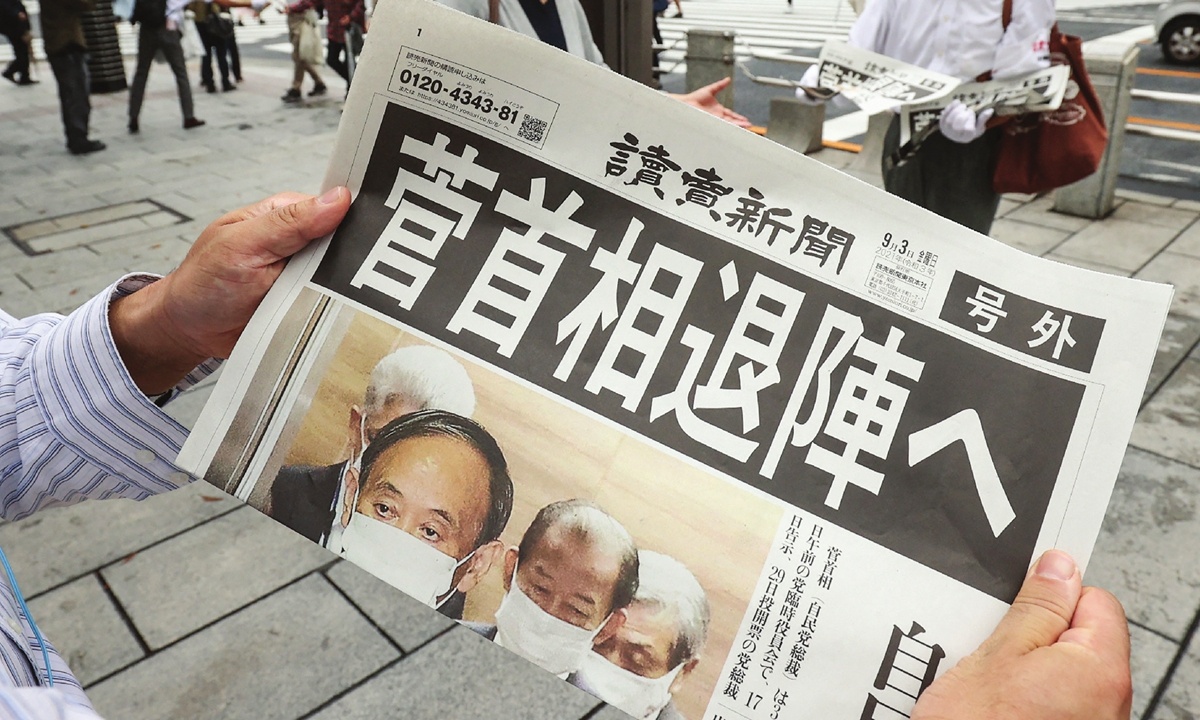 An extra edition of a daily newspaper reporting on Japan's Prime Minister Yoshihide Suga deciding not to run for the Liberal Democratic Party (LDP) presidential election is distributed in Tokyo's Ginza district on Friday. (Photo: AFP)

COVID-19 epidemic has led to the fluctuation of Japanese political scene. With other parties in a weaker position, it is widely expected that the Liberal Democratic Party (LDP) will retain its majority in the National Diet, the Japanese legislature, after elections. This means that whoever wins the LDP leadership election is likely to serve as Japan's new prime minister. Three members of the party have announced their candidacy for the leadership. They are former foreign minister Fumio Kishida, current Minister for Administrative Reform and Regulatory Reform Taro Kono, and former minister of internal affairs and communications Sanae Takaichi.

Fumio Kishida, 64, is one of the most popular candidates. Judging from his recent statements, Kishida's policy in terms of security, especially the one toward China, is more assertive than that of Yoshihide Suga, the current President of the LDP and Japanese Prime Minister. Kishida is leading Kouchikai, a faction of the LDP known for its dovish, liberal-leaning stance.

As for the economy, Kishida has promised that alleviating the widening income gap in the COVID-19 pandemic will be one of his top priorities if he is elected party president and hence prime minister. And to achieve that, he has proposed to increase government support significantly for people and businesses affected by the epidemic. Kishida has said he would compile a spending package worth tens of trillions of yen (hundreds of billions of dollars) to deal with the economic impact of the pandemic.

Taro Kono, 58, is one of the doves in the LDP that advocate a friendly relationship with China. However, in recent years, his attitude toward China has become more and more assertive, as maritime disputes and conflicts between Beijing and Tokyo keep intensifying and as Tokyo completely tilts toward Washington.

Kono has the support of Suga, and Deputy Prime Minister Taro Aso, the leader of the faction Kono belongs to in the LDP. He is also popular with the public, especially young people, for his "savvy presence on social media" and fluent English. Kono led a recent public opinion poll in Japan, earning 27 percent support, 10 percent more than the second candidate. However, he still hasn't received enough support from senior members of the party.

Sanae Takaichi, 60, is the only female candidate and would become Japan's first female prime minister if elected. Takaichi is not aligned with any faction, but has recently received an important endorsement from Shinzo Abe, Japan's longest-serving prime minister, who still wields considerable influence in parliament. Like Abe, Takaichi is a staunch conservative. She is a member of Nippon Kaigi, an ultranationalist group that has strived to restore the emperor's "sacred status" and rebuild Japan's armed forces.

Externally, Takaichi advocates amending the Article 9 of the Japanese Constitution to give the Self-Defense Forces more power and denies the existence of the forced recruitment of "comfort women." Internally, she sought to punish media outlets which criticize the government and imprison those who defaced the Japanese national flag.

In any circumstance, Japan's pro-American foreign policy will not change. No matter who wins the position, there is already a consensus within the LDP on continuing Abe's foreign policy and strategy, which emphasizes a close US-Japan alliance. It also persists engagement with so-called like-minded countries within the framework of the Quad mechanism (consisting of the US, Japan, Australia and India).

The next Japanese government will maintain the LDP's strategic insistence and firmly support the US and the Quad alliance. Japan's strategic trajectory will be largely based on its defense cooperation with the US. In this light, Tokyo's China policy will gradually converge with what Washington wants. Even if each candidate's attitude toward the alliance is different, it is more about how deep and fast they will push the cooperation with the US, rather than questioning the alliance itself or its development direction.

There was a sound rebound in China-Japan ties in the later period of Abe's tenure. To some extent, this happened because of Japan's sense of uncertainty about the reckless Trump administration. Clearly, this situational landscape has changed since US President Joe Biden took office. Yet as the US continues its containment of China policies, the relationship between Beijing and Tokyo will likely keep the status quo or even deteriorate.