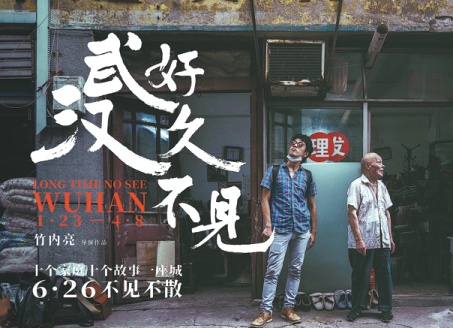 A poster of documentary, Long Time No See,Wuhan, directed by Takeuchi Ryo, a Japanese who has been living in Nanjing, Jiangsu province, for seven years. (Photo: China Daily)

Long Time No See, Wuhan, a documentary by Japanese director Takeuchi Ryo on 10 families in the city worst hit by the novel coronavirus in China, reached 28 million views and ranked top on Weibo's video channel just 24 hours after it was released on June 26.

41-year-old Ryo, who lives in Nanjing, capital of Jiangsu province, chose 10 Wuhan families from among the 100 that approached him on Weibo, and filmed their real life stories during and after the outbreak.

According to Ryo, the objective of his documentary is to help foreigners overcome their fears of Wuhan. He said he feared Wuhan would become like Fukushima, the Japanese prefecture that is considered a dangerous place even nine years after the nuclear accident triggered by a tsunami. Through his documentary, he wants to show the reality of Wuhan and tell the world how safe the city is.

According to Ryo, he chose the 10 residents on the basis of "what would interest foreigners". Among the 10 people in the documentary is a Japanese restaurant owner and one of the many laborers who helped build the specialty Leishenshan hospital－to attend to novel coronavirus pneumonia cases－in just 10 days.

Everyone who has been featured in the documentary－such as a nurse, deliveryman and teacher－did his or her bit to fight the novel coronavirus and bring the city back to normal.

The documentary shows the power of truth and reality in countering rumors and biases, and helped dispel doubts in the minds of many Japanese audiences who watched the documentary; they are willing to visit Wuhan in the future. The more foreigners watch the documentary, the more they are likely to get a real picture of Wuhan.