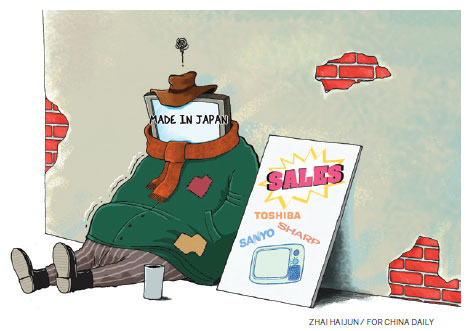 Chinese electronics giant Hisense announced on Tuesday that it would acquire a 95 percent stake in Japan's Toshiba Visual Solutions Corp as part of its efforts to expand its global business. Under the 12.9 billion yen ($112.44 million) deal, which is likely to be completed by the end of February next year, Hisense Electric Co, the listed unit of Qingdao-based Hisense Group, will buy the TV business of Japan's struggling conglomerate Toshiba. After the transaction, Hisense will integrate the research and development wings, supply chains and global resource channels of the two companies.

Toshiba Visual Solutions is not Hisense's first global acquisition. In 2015, it purchased Sharp's TV business in Mexico and acquired Sharp America's TV line for the North and South American markets. Also, the Toshiba-Hisense deal is one of the many overseas acquisitions by Chinese enterprises in recent years, some involving much larger amounts.

But why has Hisense's latest acquisition invited so much attention despite not involving "big money"? Possibly because Japanese home appliance manufacturers once dominated the world market and "Toshiba in the new era" was a very popular advertisement in China.

However, the predicament faced by some Japanese home appliance makers because of widespread losses, staff layoffs and withering away of the once powerful brands is not a collective fiasco for Japanese enterprises. Since the home appliance industry is not a high-profit sector, some Japanese electronics companies have decided to sell some of their stakes or sell them off totally to reduce their losses and pursue self-transformation.

Kobe Steel's test data fabrication scandal and its ongoing fermentation have triggered an earthquake across the global supply chain of auto and aircraft manufacturers, and raised grave concerns about the safety of Shinkansen trains, aircraft and automobile products.

In the auto industry, Nissan halted production in all its plants in Japan last month after it emerged that vehicles rolling off its lines were being quality checked by uncertified staff for more than 20 years. Subaru, too, said its quality test data might have been fabricated for 30 years. Similar quality scandals include fraudulent fuel consumption test by Mitsubishi, and the accidents caused by its defective airbag design.

Needless to say, these scandals have tarnished Japan's image as a quality manufacturer.

Despite their brilliant performance in the past, some Japanese enterprises have developed such "big-enterprise diseases" as systemic rigidity, overstaffing, excessive technology worship, slow pace of innovation, and the failure to take into consideration the changes brought about in the market by the internet.

The "fall" of Japanese manufacturing enterprises should be a lesson to Chinese companies, but it should also prompt them to work harder to reach the highest standards of manufacturing.

Chinese TV brands' share in the global market increased to more than 30 percent last year, replacing the Republic of Korea at the top, partly because of the overseas expansion and global acquisitions by Chinese TV makers. And as Japanese TV brands are likely to further withdraw from the market, Chinese manufacturers should raise the level of their technologies, enhance their brand value and influence, strengthen their research and development, and upgrade their supply chain and global resource channels. Only by doing so can Chinese enterprises grab the market share conceded by Japanese brands and add value to the made-in-China brands.