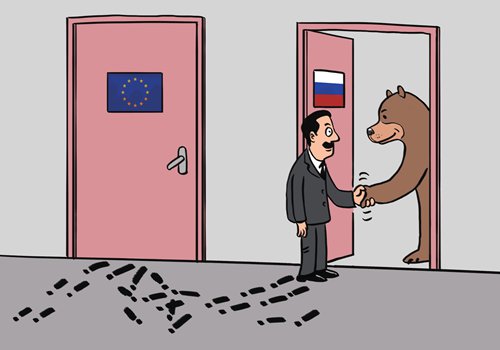 Russian President Vladimir Putin visited the Turkish capital of Ankara on Monday, according to Turkish media reports. Putin and his counterpart Recep Tayyip Erdogan discussed bilateral relations and the regional situation. Putin already visited Turkey in late September, reaching a consensus on the Iraqi Kurdish independence referendum. In turn, Erdogan paid a visit to Russia on November 13 to discuss the Syrian issue with Putin.The frequent meetings of the two countries' leaders reflect that their relations have entered into a "honeymoon" period, standing in stark contrast to the time when their ties hit rock bottom due to the downing of a Russian warplane. On November 24, 2015, Turkey shot down a Russian warplane carrying out military operations against IS in northern Syria, provoking Putin to impose sanctions on Turkey and even raise the possibility of a military conflict. Since a failed military coup in Turkey on July 15, 2016, Turkish-Russian relations have continued to warm up. After the unsuccessful coup, Erdogan visited Russia as the first stop on his foreign visits. The two leaders then made frequent trips between the two countries. Turkey also offered gradual concessions on the Syrian issue in order to align closer to Russia's stance of supporting the Syrian government. Furthermore, Russia and Turkey have stepped up cooperation in the fields of energy, tourism and security, ushering in new opportunities for development. The two sides also reached a consensus on the Palestine-Israel issue, jointly opposing US President Donald Trump's recognition of Jerusalem as the capital of Israel. The attempted coup can be regarded as a turning point for Russian-Turkish diplomatic ties, by going from rock bottom to a "honeymoon" period. So how did Russia-Turkey relations recover in such a short period of time? And does the development of their diplomatic "honeymoon" period signify a turning point in Turkish diplomacy?The rapid recovery of Russia-Turkey ties displays that both Putin and Erdogan are pragmatic politicians. For Turkey, its internal turmoil caused by the failed coup influenced its diplomatic trajectory. Dissatisfied with Erdogan's political clean-up and constitutional propaganda, the West soured their political ties with Turkey, and in November 2016 the European Parliament passed a resolution in favor of freezing Turkey's EU membership accession process. It was Erdogan's isolation from the Western diplomatic world that became the catalyst for Turkey to decide to strengthen relations with Russia.At the same time, Turkey faces dire economic straits, with the devaluation of its currency the Lira, rising inflation and high unemployment. Russia's economic sanctions on Turkey would undoubtedly aggravate the latter's economic plight. In addition, the continued recovery of Russia-Turkey relations also serves as a bargaining chip for Turkey to put pressure on the US and Europe.For Russia, competition with the US and NATO is becoming more apparent than cooperation. Russia hopes to break through the economic blockade imposed by the West through the Turkish Straits. NATO's eastward expansion threatens Russia's fundamental interests. To win over Turkey, an important member of NATO, it is in Russia's interests to hold back NATO by sowing discord between NATO's member states.When Turkish-NATO ties turned sour due to the coup, Russia seized the opportunity. Turkey is an energy transfer hub between the East and the West. Strengthening natural gas exports to Turkey and exporting resources through its oil pipeline are key opportunities for Russia to recover its economy. Therefore, national interests boost Russia-Turkey ties, as both have something to gain.Economic structure determines other key governance structures. For centuries, since Kemal's reform in Turkey, the country has essentially formed a pattern of development alongside the Western economy, implying that Western diplomacy has always been an important factor for Turkey. At the same time, Turkey also pays great attention toward developing diplomatically with Russia to diversify its diplomatic model. This is Turkey's strategic way to adapt itself to the multipolar development of the international community and its demands. In fact, the two countries still have their differences on the Syrian issue as Russia supports Syrian Kurds. Furthermore, Central Asia is Turkey's target area of "strategic depth," while Turkey's undertakings in Central Asia will inevitably touch upon Russia's interests there. Therefore, this "honeymoon" stage of Russia-Turkey relations is not stable, and will change along with the development of new interests and demands from both sides, as well as internationally.