OPINIONS Key projects boost prosperity in China over past 5 years

Key projects boost prosperity in China over past 5 years 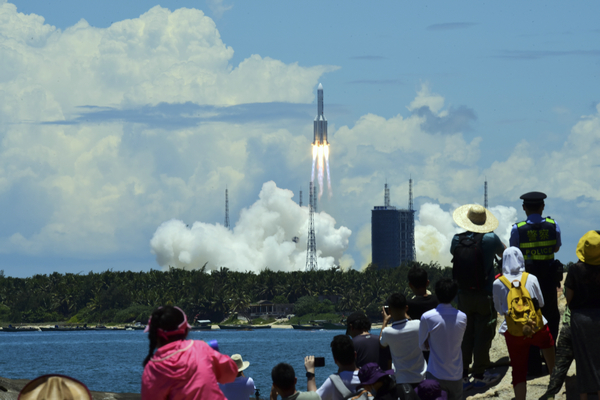 BEIJING, Nov. 4 (Xinhua) -- As Chinese policymakers outline the development roadmap for the next five years, a look at the country's key projects over the past half decade may offer a hint at why China has made tremendous advancement in economic and social development.

These initiatives helped drive economic growth, enrich human understanding of the universe and bring concrete benefits to the people.

China launched the last satellite of the BeiDou Navigation Satellite System in June this year, marking the completion of the deployment of its own global navigation satellite system.

As one of the four global navigation satellite systems in the world, Beidou is expected to provide global users with a range of services, including global short-message communication, basic navigation and international search-and-rescue assistance.

"Beidou serves not only China but also the world," said Wang Wenbin, a Foreign Ministry spokesperson.

The project is just one example of scientific endeavors China has made in the past years to meet its development needs as well as to contribute to the benefit of humanity.

China announced the opening of the Hong Kong-Zhuhai-Macao Bridge in October 2018, which is the world's longest cross-sea bridge.

In the past five years, China completed several infrastructure projects that connected its people and facilitated opening-up.

Beijing's new Daxing International Airport, for instance, was built in less than five years and officially opened to flights on Sept. 25, 2019.

Hailed as the "new gateway" to China, the new airport has seen the total passenger throughput exceed 10 million a year after it began functioning.

By the end of the 13th Five-Year Plan period, the country's rail lines in operation will have reached 146,000 km, with high-speed rail lines totaling 38,000 km, topping the world.

At a recent State Council meeting that discussed the formulation of the country's new five-year plan, Premier Li Keqiang called for efforts to start a new batch of projects for development, innovation and people's well-being, particularly in the fields of education, health, as well as elderly and child care.

Over the past five years, China has implemented a number of projects aimed at helping those most in need, involving initiatives in poverty alleviation and vitalization of the rural areas.

In northwest China's Xinjiang Uygur Autonomous Region, a total of 22.6 billion yuan (about 3.38 billion U.S. dollars) has been invested in the past five years to improve rural power facilities in the region.

By the end of September this year, China has constructed or rebuilt rural roads totaling 1.39 million km as part of efforts to vitalize the rural areas in the past five years, and the number is expected to exceed 1.4 million km by year-end.