OPINIONS Kim can glean insight from China's road to prosperity

Kim can glean insight from China's road to prosperity 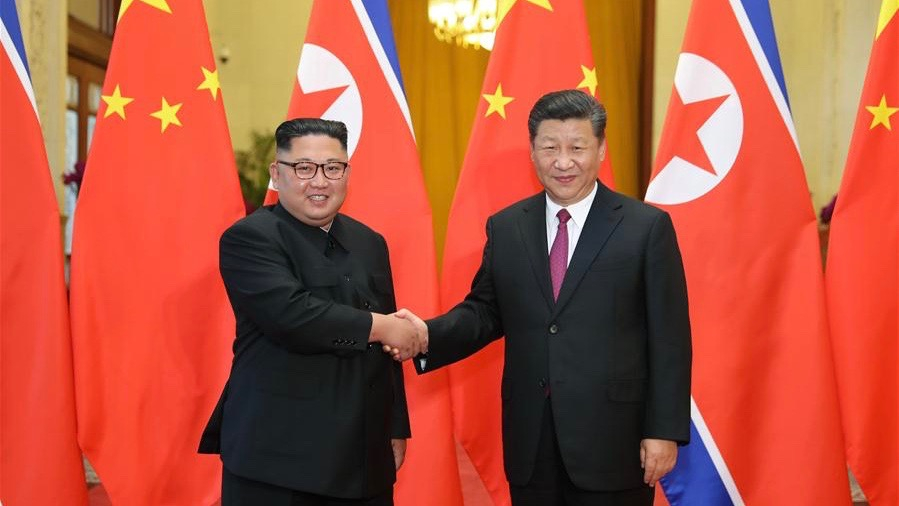 On Wednesday, Kim Jong Un wrapped up his two-day China trip, the third of its kind in three months. In meeting with Chinese President Xi Jinping, the young leader of the Democratic People’s Republic of Korea (DPRK) expressed the hope to “lift the unbreakable DPRK-China relations to a new level.”

Now that Kim has committed to complete denuclearization, he has shifted gears to domestic socio-economic growth – by taking the first step of taking a seat at the international table.

His relationship with China is especially valuable, as the economic superpower has much to pass on to the DPRK while it begins its path to prosperity.

"It's, like, at the early stage of China's reform and opening up," said Lyu Chao, director of the Peninsula Studies at the Liaoning Academy of Social Sciences. "The country has carried out some pilot projects in transforming to a more open economy. For instance, some villages are trying the household responsibility system, which was actually the first move of China's rural reform.”

Previously, under Kim's two-plank "byunjin" policy, the DPRK had been pursuing the parallel development of its nuclear arsenal and economic modernization. “But the seven nuclear tests over the past years bogged down the country in an opportunity cost dilemma. Nuclear development and economic growth became a zero-sum game for it,” noted Yang Xiyu, a senior fellow at the China Institute of International Studies.

As the White House decided to reduce military activity on the Korean Peninsula – shown in Donald Trump’s agreement to cease military drills with the Republic of Korea (ROK) slated for August – the DPRK has achieved greater political stability, which serves as a prerequisite for the economic growth it seeks.

Because Pyongyang has maintained a close relationship with Beijing, not only will it likely see economic support as tensions ease on the peninsula, it can also gain insights from China’s developmental path.

China embarked on economic reform and opening up in 1978 under the guidance of then Chinese leader Deng Xiaoping, who pushed for the creation of Special Economic Zones, in which cities with more relaxed economic policies acted as test sites for reform. Each city had greater leeway than other parts of the country to experiment with policies involving flexible regulation, and greater financial incentives for private domestic enterprises and foreign firms.

The DPRK took this approach in 1991 and built up the Rason Special Economic Zone in December of that year. Between 2013 and 2017, it built 25 more economic development zones, which, however, remain desolate, largely because the UN sanctions cut off 90 percent of its overseas trade flows.

But these sanctions might be lifted and greater investment is expected to flow in following Kim's diplomatic pageantry.

“This trend toward political stability would be a boon to the DPRK’s economic infrastructure already in place, such as the Rason Special Economic Zone, the Kaesong Industrial Kaesong Region and the Wonsan-Kalma coastal tourist zone, where the government has designed new models to attract foreign investment,” Lyu told CGTN.

Meanwhile, China supports the DPRK in taking a development path suitable to its own condition.

It’s also noted that Chinese state media outlets announced the news as Kim landed in Beijing Tuesday morning, in stark contrast to his previous trips to Beijing and northeast China’s Dalian, which weren't announced until after he left. This showcases Pyongyang's more open and transparent manner in approaching diplomacy.

The two sides are proactively reviving their diplomatic heritage. Kim’s grandfather Kim Il Sung made more than 40 trips to China and fostered a special friendship with Chairman Mao Zedong. His father Kim Jong Il visited China seven times either on official occasions or for vacation. The concord comes as a continuation of the diplomatic legacy of Kim’s predecessors.

When the security architecture on the Korean Peninsula starts its dramatic turnaround, it’s important that leaders of the two neighboring countries keep strategic communication on regional and international hot spots.

As the visit happened amid spiraling tensions over a potential trade war between the world’s largest economies, Western media outlets have started making various associations, as they always do. They claim forging closer ties with Kim is one of Beijing’s responses to Washington’s trade provocations and even frame the DPRK as one of China's “card” in a geopolitical game.

China has its own diplomatic principles and never takes any country as a “card.” It’s malicious to associate those two independent events. “Beijing has the same appeals as Washington in the denuclearization of the Korean Peninsula and has always supported Washington and Pyongyang in launching direct talks,” Lyu told CGTN.

When a feasible peace deal is reached and the specter of war disappears, in which China will play an instrumental role, the DPRK will see its economy grow meteorically within five to 10 years. The Northeast Asian economy, which has been buttressed by China, Japan and the Republic of Korea, will enjoy robust development momentum once the DPRK embraces peace and opens up.