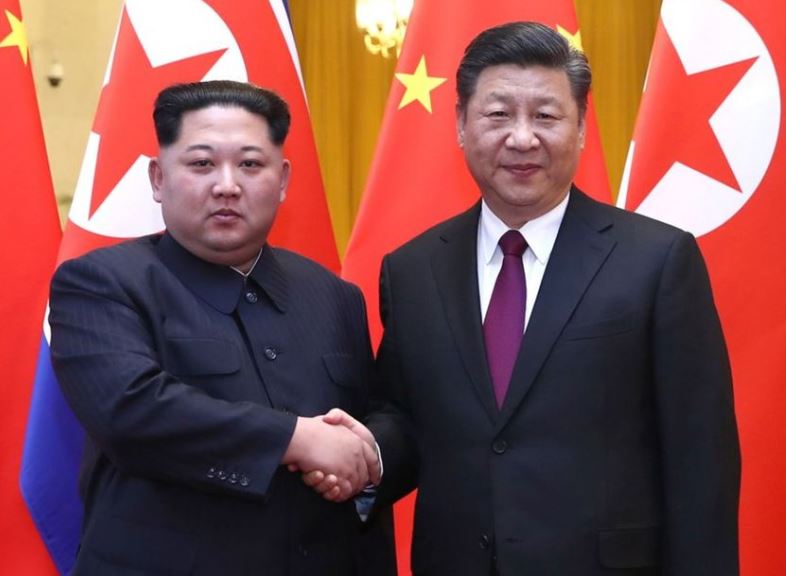 (Photo: Xinhua)North Korean leader Kim Jong-un was in Beijing again, a new testament to the strengthening relations between China and North Korea. Kim has paid four visits to China in less than 10 months, which is unprecedented. He brushed aside diplomatic protocol and came to Beijing at a critical juncture, when the ongoing Sino-US trade negotiations were poised to produce a breakthrough and the second summit between him and US President Donald Trump is slated to take place soon. Kim's visit is likely to achieve two results. First, China-North Korea relations will be strengthened. Kim devoted his maiden overseas visit to China last March, thus setting in motion a fence-mending process between the two countries after relations had been hit by disagreement over Pyongyang's nuclear weapons program. His following two visits further revitalized the traditional friendship and strengthened strategic communication and trust. The fourth visit continues the momentum to boost bilateral relations. Kim will also explore the possibility of economic cooperation between the two countries. It is no secret that China-North Korea relations need balancing. Their economic ties fell victim to sanctions imposed by the United Nations Security Council and remain relatively weak, whereas political relations have seen dramatic growth. In 2017, China's imports from North Korea dropped 33 percent over the previous year. The first three quarters of 2018 saw China's imports and exports see a precipitous slide of 40.8 percent and 90.1 percent respectively. North Korea's 2018 economic growth may enter negative territory. In order to address economic problems, North Korea decided to shift its national strategy from the Byungjin Line to economic development, as well as to improve relations with China, South Korea and the US. In the past year, Kim succeeded in undertaking dazzling summit diplomacy, which commanded worldwide attention and created rapprochement with South Korea and the US. However, improved relations with other countries hit the ceiling as the sanctions prevent economic cooperation between North Korea and other countries. Kim certainly knows that even his fourth visit cannot end sanctions, but he may further seek to stabilize North Korea's trade with China and to expand economic cooperation while not violating the curbs. At the same time, North Korea and China may draw a plan to do preparatory work for advancing economic cooperation. Certainly, as a goodwill gesture, China may be ready to increase humanitarian aid as other countries like South Korea step up efforts in this regard.  Second, Kim's latest visit may facilitate the planned second summit between him and Trump. Since their first historic meeting in Singapore, the US-North Korea negotiations have not gone well and have stalled, and the highly expected second summit has become something of an enigma. Kim's recent New Year speech and Trump's positive feedback are like a warm-up exercise to their long-overdue meeting. Kim's previous visits to China had something to do with his first meeting with Trump, the fourth one is not an exception. Even though we don't have the luxury of getting the information straight from the horse's mouth, we can draw some conclusions. The second summit between Kim and Trump is approaching. Kim cannot wait in Pyongyang until after lunar New Year, which is at least a month away. Trump once expressed his willingness to meet him in January and February and US Secretary of State Mike Pompeo once revealed that both the US and North Korea are hunting for the meeting venue. All signs point to the second summit.The second summit is so important that Kim feels it is necessary to break protocol and consult Chinese leaders before shaking hands with Trump once again. If the first summit produced something more general and symbolic, the second summit is earmarked to lay down an action plan that demands quick implementation. Kim takes the upcoming summit seriously and may be willing to make major concessions if Trump reciprocates. Thus, in comparison with the previous visits, in which Kim had extensive conversations with Chinese leaders, this time he may prefer to have in-depth discussions over more pressing issues. We all know that there are many sticking points in US-North Korean negotiations, and some stand out. On the surface, the countries have been locked in a standoff over denuclearization and the signing of a peace treaty. Under the surface, the argument is between North Korea's nod to verification of denuclearization and US willingness to lift some sanctions. In addition to these, how to proceed with denuclearization and associated matters is another thorny issue. North Korea prefers a phased and synchronized process to a once-for-all solution. No doubt, North Korean and Chinese leaders will exchange views and forge a common ground.The frequent and intensive face-to-face talks between Chinese and Korean leaders may fuel speculation about possible China-North Korea collusion to counter the US. But such speculation is groundless. Chinese President Xi Jinping and Trump met on the sidelines of the G20 summit in Argentina and agreed to work together to promote denuclearization on the Korean Peninsula. If China-US trade negotiations result in frictions easing to some extent, we believe Kim's visit to China will have proven fruitful and conducive for the planned second Kim-Trump summit.