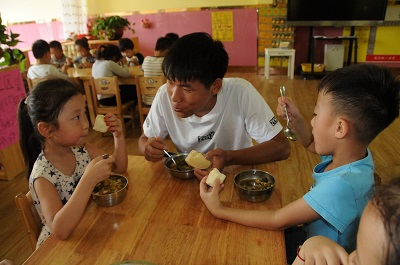 The latest incident involving child abuse at a RYB kindergarten in Beijing has triggered another debate on the welfare of kindergarten teachers.

A report conveyed by Beijing-based Zhiyan information agency showed that in 2015 China had 42.65 million kids compare to 2.3 million teachers in kindergartens, which means one teacher has to handle about 20 children.

As China changed its long-time one-child family planning policy in October 2015, recent years have witness a wave of baby boom. It is for sure the kindergarten teachers are facing heightening pressure.

To be a trustworthy teacher, it takes a certain educational background. The higher-level education diploma a teacher has, the better he/she could handle of the kids.

Though being a teacher enjoys a relatively high reputation in China, it can’t make up the reason that a well-educated people to choose being a kindergarten teacher as a career.

In China, a teacher’s income is often considered not good enough, especially for those who are not working in elite education agencies.

There are also much more female kindergarten teachers than male ones. As Chinese society often puts extra pressure on men, many of the male teachers have to switch to some other jobs – after a stint as a kindergarten teacher – to make more money to cope with their mounting pressure.

To make the infantry education well established, it should be well-financed and policymakers should consider adopting better policies to attract graduates to become teachers.

If the conditions are not improved, there will only be fewer good teachers for preschool kids which in no doubt results in a worse situation for kindergartens.