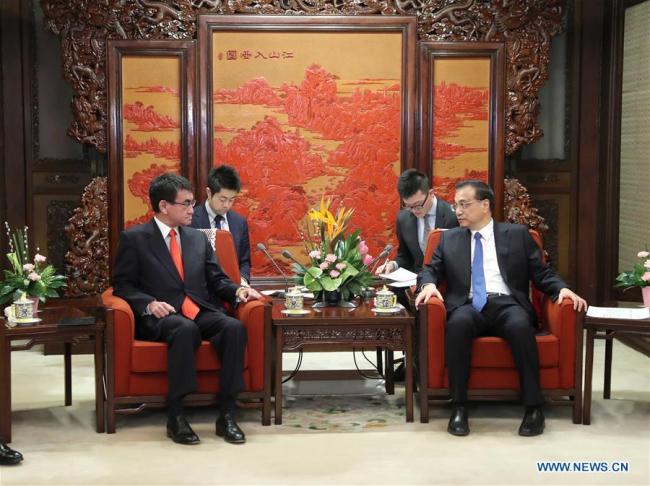 Taro Kono, Japan’s Minister for Foreign Affairs arrived in Beijing on the 27th of January and departed early morning on the 29th of January. This was Mr. Kono’s first visit to China after assuming office in 2013. During his visit he held meetings with Chinese Foreign Minister Wang Yi, State Councilor Yang Jiechi and Premier Li Keqiang. The visit coincided with the 40th anniversary of the signing of the Treaty of Peace and Friendship between Japan and China. The visit aimed at resuming reciprocal visits by the leaders of each country.

Before the visit, during a routine question answer session between the media and Foreign Ministry Spokesperson Hua Chunying, Chunying maintained that the current status of the Sino-Japanese relations is that China is trying to “maintain a momentum of improvement while also facing challenges”. She expressed with hope that, the visit by Foreign Minister Kono, “will implement the important consensus reached by the leaders of the two countries and promote the continuous improvement and development of China-Japan relations.” It is true that both sides have taken a series of confidence building measures and made goodwill gestures in the recent past thus one can hope for the relations to take a turn for the better following Kono’s visit as it too is a part of the confidence building measures.

Sino-Japan relations have always witnessed ups and downs over the years. Each time when these relations start to exhibit signs of normalcy the events emanating from Japan seem to disrupt all progress. It is because of this reason that Foreign Minister Wang Yi described the relations as “a boat navigating against the current,” and he emphasized that the two nations need to “overcome the turbulence and obstacles” impeding progress needed to restore relations.

Japanese Prime Minister Shinzo Abe’s has stated that he wishes to engage with Beijing and bridge ties and communications. The Sino-Japanese relations had been gaining momentum towards amelioration in the past but ever since Japan made claims towards the Diaoyu Islands back in 2012, which are territories of China since ancient times, this act made by Japan sent the relations between the two countries on tangents from one another, and understandably so. Though Prime Minister Abe has expressed willingness towards bridging ties but at the same time mixed signals are coming from Japan. Recently just before Mr. Kono’s visit, according to Japanese media reports, the Japanese government opened a territory and sovereignty exhibition hall in the Municipal Research Building in Chiyoda-ku of Tokyo, trying to publicize Japan's so-called territorial claims. This is exactly why during Mr. kono’s visit, Mr. Wang Yi termed the Sino-Japanese relations as a “boat navigating against the current.”

During Kono’s visit he invited Premier Li Keqiang to visit Japan as soon as possible to participate in a trilateral summit which also includes South Korea. Kono’s visit is termed as an important event towards opening lines of communication at the leadership level, but for the relations to actually take on momentum towards up-gradation require addressing the elephant in the room, which Japan has not been doing so far.

These series of goodwill gestures made by both countries and Kono’s visit do help in breaking the ice between the two countries and now what remains on the part of Japan is to come on the negotiating table being setup by China to resolve the territorial disputes within the East China Sea. President Xi Jinping’s government has been all for peaceful negotiations, but Shenzo Abe’s government’s endeavors for bridging relations with China have been all icing and no cake.

The fact of the matter is that until and unless Shenanigans like trying to publicize Japan's so-called territorial claims over the Diaoyu Dao do not stop and talks, plus policy actions hinting the political will for resolving the East China Sea dispute do not start, simple confidence building measures will only take the relation so far only to plummet.

Last year marked the 45th anniversary of diplomatic relations between China and Japan and this year marks the 40th anniversary of the signing of the China-Japan Peace and Friendship treaty. Therefore, Kono’s visit at the start of the year do hold significance and such significant steps raises the responsibility on Shenzo Abe’s government to own up to his expressed willingness with actual fence-mending actions otherwise all efforts will end in vain.