Kudlow should understand China's firm will 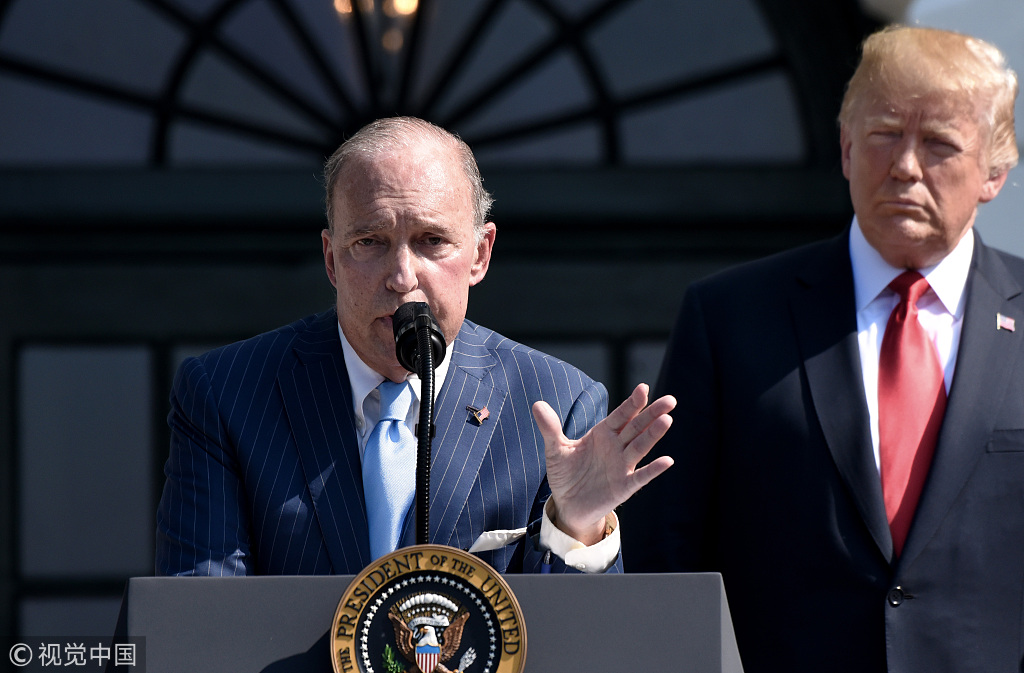 Larry Kudlow, director of National Economic Council, left, comments on the 4.1 percent economic growth for the second quarter as President Trump lokks on during a statement in the South Lawn of the White House July 27, 2018 in Washington, DC. (Photo: VCG)

China announced Friday the imposition of tariffs on $60 billion in US products. Top White House economic adviser Larry Kudlow dismissed China's latest response, saying "I might think the $60 billion is a weak response to our $200." He also warned that China had "better take President Trump seriously."

Kudlow also claimed that the "Chinese economy is lousy, investors are walking out, the currency is falling." Kudlow intended to mean that China could not sustain a trade war, while the US was determined to protract and escalate it. He did admit that "There is a lot they can do to damage our companies in China."

Kudlow sounded like he was talking about an economy like Japan, South Korea or Mexico. But China is the world's top soybean importer, the No.1 market for automobile and telecom products and has the fastest growing internet economy. The Chinese market is key to the survival of many big American companies and American farmers.

The two numbers, $200 billion and $60 billion, don't show an imbalanced interdependent economic relationship, but rather that Washington has lost its mind on trade while China retains its rationality. The US is trying to conclude the trade disputes swiftly, but China is prepared for a protracted war.

The US economy achieved 4.1 percent GDP growth in the second quarter after exhausting measures including tax cuts. Almost all experts think this growth speed is unsustainable. China's economy grew 6.8 percent in the first half of this year, a result of various decelerating measures. Its economy has hit the bottom already.

Massive market potential provides fuel for China's further economic growth. China is bidding farewell to an era of growth heavily dependent on exports. In future, the US economy will depend more on the Chinese market than the other way around, and that is a tendency about which all American elites are aware, including Mr. Kudlow.

A trade war will bring temporary pain to China, and will add more pressure to Beijing during the first round of disputes. However, China will show its resilience in trade and social cohesion as long as the trade war enters a stalemate. Instead of warning China, Kudlow should warn the Trump administration not to underestimate China's determination to fight to the end.

Chinese people really want to avoid a trade war. Considering the unreasonable US demands, a trade war is an act that aims to crush China's economic sovereignty, trying to force China to be a US economic vassal just like Japan accepted the Plaza Accord.

China has to defend its right to development, and we don't fear sacrificing short-term interests. However, the US will bear losses as well. It's a mutual depletion where people in both countries have to pay the same price.

Throughout history, the US arrogantly initiated many wars that eventually ended up hurting itself. Washington's arrogance this time is up against a major power. When others believed that the US was just playing tricks with trade, the White House thought it could strike down China. But the US' ability doesn't match its ambition.

China has time to fight to the end. Time will prove that the US eventually makes a fool of itself.