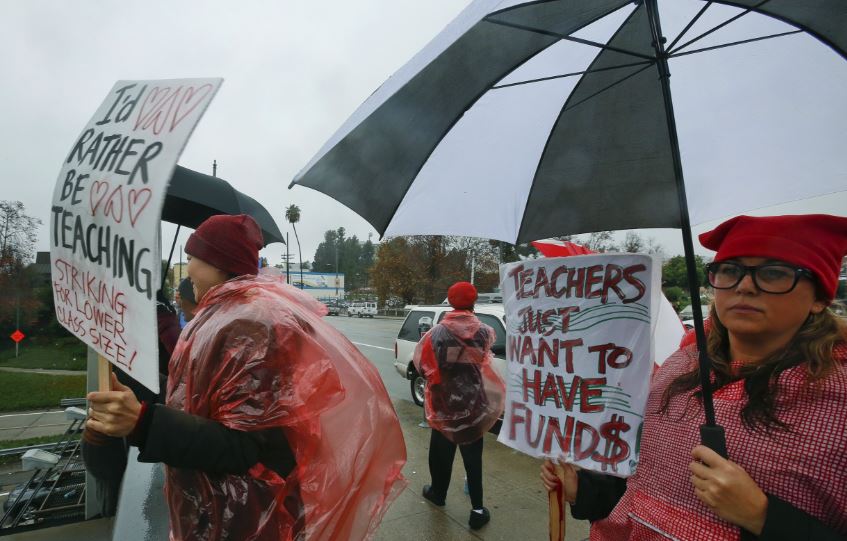 Los Angeles (People's Daily) -- The Los Angeles Unified School District teacher’s strike is into its sixth day, and according to CNN, cost the LAUSD $125.1 million dollars since it has caused attendance rates to plummet and LAUSD schools receive money based on student attendance.

The simple fact is that America’s public school system is broken and in need of a major revamp because teachers from many states are all asking for the same thing: more money, smaller class sizes and more support staff. The proof lies in the fact that California is not alone in this strike.

Ironically, that $125 million of lost money could have gone toward helping many teachers and provided many jobs.

LAUSD teachers have pretty simple demands: they want more money, smaller class sizes and more support staff – yet somehow, some are seeing their demands as outrageous because it would increase taxes. American teachers should not have to strike to ask for decent living wages and adequate support. According to the National Center for Education Statistics, public school teacher salaries averaged about $58,900 in 2016-17, but have fallen over the last 10 or so years.

Why teachers need to strike to get paid more

Lower wages will just push more good teachers out of the profession or toward private schools, and at the least – falling wages could mean higher apathy and poorer work ethic. The easiest way to make sure that a productive employee stays productive is to pay them well. In California’s case, this almost seems too obvious since the state is home to some of the highest housing costs in the nation and a decent wage is necessary to even live in the state.

Just as importantly as a raise are the teachers’ other demands for smaller classes and more support staff. According to the Center for Public Education, smaller class sizes are linked to higher achievement thanks to more teacher-student interaction. Furthermore, more support staff means more jobs for nurses, librarians, psychologists – which can help lower unemployment rates. Lower unemployment rates directly correlate to a better economy and more money through taxes for public services like education.

America’s education system for many years was the envy of the world and its higher education is still highly sought after by many with high profile colleges like Yale, Stanford and Harvard – but the same cannot be said about it now. According to a US News and World Report, in 2018 America didn’t finish in the top 10 for best education in the world: it placed 17th.

This leads back to growing apathy caused by the lack of money and support. If teachers need to worry about not having money to pay rent or having the best resources for their students, of course education will start slipping.

“Increasing per-pupil spending by 10% in all 12 school-age years increases probability of high school graduation by 7 percentage points for all students, and by roughly 10 percentage points for non-poor children,” Professor of Education at Rutgers University, Bruce D. Baker said in a recent report about education spending.

In his report, Baker noted that 29 states have provided less education funding since 2008 and that this directly puts a strain on students, especially in poorer areas. Another report, called Saving Futures, Saving Dollars: The Impact of Education on Crime Reduction and Earnings, made the connection that people with less education are more likely to become criminals. The report projects that increased high school graduation rates will cause lower numbers for assault, larceny, burglaries and even murder.

This is in definite need of rectification since California is ranked 46th out of 50 states and Washington DC in terms of education spending. According to the National Center for Education Statistics, in 2017 California spent $8,694 per student, which was $3,462 less than the national average of $12,156 per student.

While many are blinded by the idea of having higher taxes, they are missing the point that education survives on taxes and better education means safer streets. Many would say that an investment in education is an investment for a future devoid of crime.

One thing to keep in mind are the benefits that public school teachers provide to the US. They are responsible for the futures of some 50 million children – they watch your kindergarteners, they teach them how to read and they help them above and beyond what is normally expected in a profession.

Teachers can help children choose professions, they can help solve social problems and sometimes help them develop a moral compass to become better people. Teachers just want what’s fair and it’s time the US provides them with that they deserve.