OPINIONS Labeling China as a ‘disease incubator’ is unscientific and racist: experts

Labeling China as a ‘disease incubator’ is unscientific and racist: experts 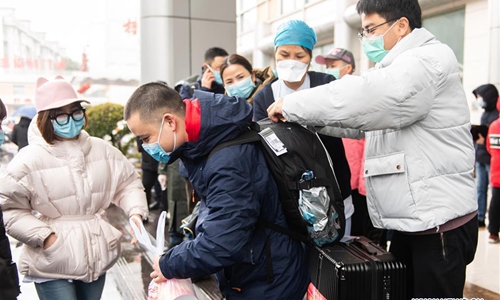 The gratuitous association of many of the world's most contagious diseases exclusively with China and the labeling China as a "disease incubator" have prompted racism and xenophobia against Chinese, which has blinded the world to China's contribution in fights against global infectious diseases, experts said. Regionalizing pandemics is not only unscientific and potentially racist but also ignores China's contribution to research progress in infectious disease control around the world, they stressed.

China is a global leader in vaccine development to deal with infectious diseases, and its response and capacities in dealing with emerging public health crises keep improving.

"Like other natural disasters such as earthquakes and typhoons, infectious diseases bring people miseries. No matter where an epidemic breaks out, it will become a common enemy of the entire world," Zeng Guang, chief epidemiologist with the Chinese Center for Disease Control and Prevention (CCDC), told the Global Times.

Zeng does not agree with some Western media reports that said many of the world's biggest epidemics have been traced to China.

There are also many epidemics that initially broke out from the US, such as influenza in 2009 that infected more than 60.8 million, hospitalized 274,000, and killed 12,469, and the Spanish Influenza which killed almost 50 million people from 1918 to 1919 was also reported initially from North America.

Neither Ebola nor HIV/AIDS, the most widespread and deadly pandemics, originated in China, experts said.

"China had never judged the US for its public health events," said Zeng, adding that facing epidemics, people should share experience and work together but not adopt a double standard to judge others.

"Our performance in the battle against 2019 novel coronavirus was indeed flawed, which is more obvious in some epicenter areas. But as the most populous country, China's overall capabilities in control and prevention have reassured professionals and observers around the world," Shen Yi, an expert at Fudan University, told the Global Times.

"Global institutions such as the WHO, International Monetary Fund (IMF) and the World Bank, have proved this by giving their positive responses," Shen said.

Many countries around also give their hand and stand together with China instead of engaging in xenophobia, unlike some people in the US.

Recent major pandemics of infectious diseases in China in recent decades appear to have been linked to wildlife. It's undeniable that wild animals consumed in some parts of China indeed played a role in exuberating the spread of diseases, Wang Guangfa, a respiratory expert at Peking University First Hospital, told the Global Times.

But wild animals are a kind of liquid pathogen and it is difficult to label an infected area merely by a regional border. China has ramped up efforts in issuing a warning of risks in consuming wild delicacies, calling on more to abandon the risky eating behavior, said Wang, noting that the outbreak in 2019 still serves us a wake-up call to tighten relevant regulations and supervision.

Under the current epidemic crisis, China's lawmakers have launched the amendment work of the Law on Wild Animal Protection, released in 1998, to legally enhance the crackdown on and punishment of hunting and eating wild animals

Moreover, compared with a decade ago, China's high-speed transportation networks, especially the development of civil aviation and high-speed rail, has increased the possibility of epidemics spreading much faster.

However, a large process has been underway in the past decades to develop scientific treatment plans. Chinese medical personnel has become more alert to epidemic diseases, compared to 10 years ago, as shown by doctors in Wuhan detecting and reporting the epidemic much faster, according to Wang.

The process from disease case revelation to pathogen detection was quicker than that during the SARS period in 2003, as is the process of drug research development in the clinical validation stage, Wang noted. Technological innovation makes great contributions for progress in the control and prevention of novel coronavirus as emerging technologies including big data, artificial intelligence, as well as 5G in long-distance diagnosis, screening, infrared sensors at traffic hubs, and online medical consultation services have been actively employed to help prevent cross infection.