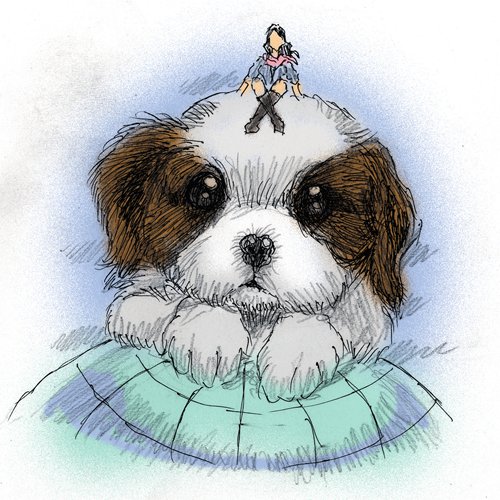 Last month, I found myself in a top boutique hotel in Beijing attending a pet Christmas party. It was a marketing event for dog lovers to show off the establishment's pet-friendly credentials, attended by a smattering of dog rescuers like me, who frankly don't have the wherewithal to stay in such a place and some well-heeled Chinese pet owners, who probably do. It's just one indication of how lucrative the pet industry is becoming in China, from being almost nothing a couple of decades ago.

Yet it makes a startling difference for a dog owner to be welcomed anywhere when most places are off limits - even in some cases the public sidewalk. Last week, a neighbor was shoved around by security guards at the neighboring shopping mall as he attempted to walk along the sidewalk with his pets. They claimed it as private space, even though their years of still-unfinished construction would mean walking in the road. It ended in the police being called, whose first question was, "Are your dogs registered?"

I and many like me are law-abiding pet owners. My dogs are registered, I walk them on the leash, I pick up their mess, but still live in fear that one complaint could lead to them being take away. This anxiety peaks in Beijing's annual dog registration season in May and June, when the police may come knocking, as they did this year, threatening to seize unregistered dogs. It costs an initial 1,000 yuan ($145) in the first year to register a dog in downtown Beijing, and 500 yuan annually thereafter - but only for dogs up to a certain size.

Many cities in China have similar registration requirements. New rules introduced in several Chinese cities recently have had pet owners across the country up in arms. Wenshan, in Southwest China's Yunnan Province, banned dog owners from walking their pets in the street from 7 am to 10 pm. Chengdu, capital city of Sichuan Province, banned certain breeds from several districts, but the one that gained the most attention was Hangzhou, a wealthy tourist and tech hub in East China's Zhejiang Province. Its many middle-class pet owners were shocked when told they could only walk their dogs from 7 pm to 7 am, and would face stiff fines or possible confiscation of their pet if caught out.

The Hangzhou crackdown was sparked by an unruly pet owner, who had attacked a woman who kicked his dog, after he walked it off-leash and it sniffed around her feet. His misdemeanor has had enormous consequences. It has set off a heated debate about the rights of pets and their owners, and indeed the rights of others not to be bothered by them.

The main issue is that as pet ownership has become more popular in China, it has spawned related industries expected to be worth an estimated 46.3 billion yuan by 2022, up from 17.5 billion yuan in 2017. The market will grow by around an annual 20 percent, according to estimates by Euromonitor. The China Pet Products Association said there are 50 million registered dogs in the country, with pet ownership growing at 15 per cent a year, SCMP reported. This is not small beer.

Yet the only regulations existing to protect the rights of everyone in the industry - and every pet - are those to do with the bad behavior of the pet itself. Nor do we get much for our pricey annual dog license - you can get a free rabies vaccination with the receipt. Sometimes the police station gives out a cheap plastic bowl. As a dog owner who has paid thousands to the local police, I hope the money can be better spent - it could be used to help solve some of the intractable problems that annoy non-owners, such as where to walk your pet pooch safely, or how to dispose of the mess.

There are no dog parks in downtown Beijing, nowhere to let your pet run around safely. It means we have to walk them in the streets. The nearest thing to a park I have is the strip of grass along the Fourth Ring Road. There could be dog poo bins placed along the street - picking up the mess is one thing - having to carry it for a long time is quite another. I agree that dogs should be leashed, but a fair warning the first time, instead of confiscation should be enough. The main step that will solve many problems would be insisting that dogs are microchipped - they are not expensive and could be given free with the registration card as in many other nations. My dogs are microchipped, which they need to be for export, but if they get lost or stolen, there is no database to register them on. Nor is there a requirement to have pets spayed and neutered, although the initial license is half the price if they are.

Media reports suggest there are officially 2.5 million registered dogs in Beijing alone (and millions more unregistered) - I can't even calculate how much money that is. That's not even including how much money people spend on food, treats, grooming, veterinary fees and pet boarding, not to mention how much people spend to buy expensive breeds.

This lack of across-the-board regulation hurts everyone. Some pet owners consider their dog a family member and are willing to shell out money to keep it well. Some are irresponsible, get a pet because it's fashionable from an unscrupulous breeder, find it's too much work and throw it away, which leaves other people to solve the problem.

I agree that pet owners should be responsible, but I also believe that they should have some support too. An animal welfare law that includes protection for pets and owners, regulates breeders and institute standards for dog breeding facilities will be welcomed by the millions of pet owners and animal activists in China. And my dogs would like a nice park to run around in.