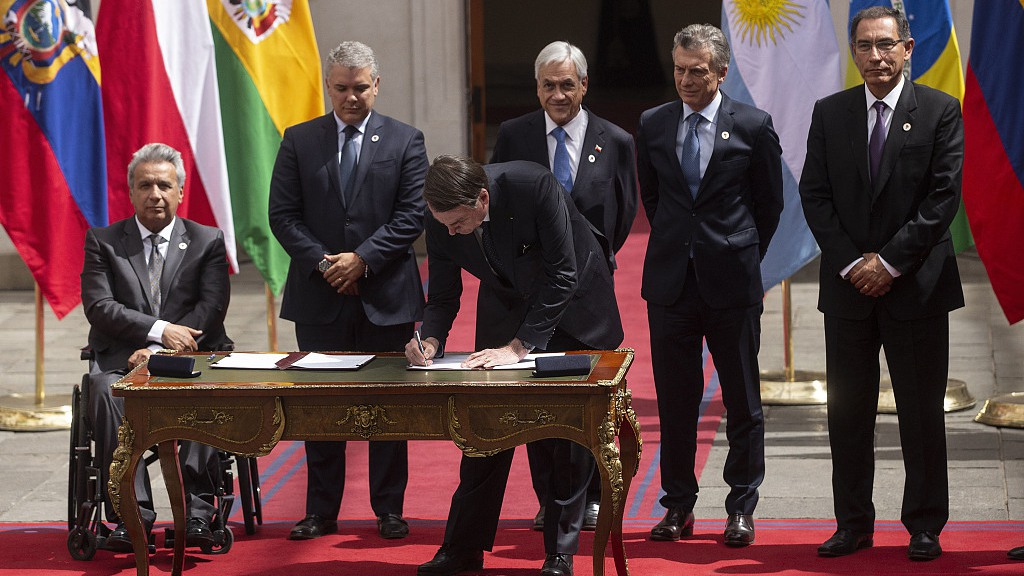 The ongoing South American left vs. right tug-of-war took a new twist as eight regional countries on the political right – Argentina, Brazil, Chile, Colombia, Ecuador, Guyana, Paraguay, and Peru – launched the Forum for the Development and Progress of Latin America (Prosur) in a summit held in the Chilean capital of Santiago last week.

Prosur came into being to replace the Union of South American Nations (Unasur). Since its inception in 2008, Unasur has at its peak gathered twelve member countries in the region and was once believed by regional leaders to advance to something equivalent to the European Union in some 15 years.

Sadly, in the current rightwing discourse, though, Unasur was denounced as a botched creation of the late Venezuelan leader Hugo Chavez and his then leftwing allies in neighboring countries. During the Venezuelan crisis, six out of twelve member countries have suspended their participation in Unasur by last year.

The immediate cause to Unasur's apparent disintegration, undoubtedly, is the ongoing crisis in Venezuela, which has pitched Hugo Chavez's successor Nicolas Maduro and other regional leftwing leaders against the political right who have won offices in elections in South American countries following the 2008 financial crisis amid economic woes.

The immediate effect of Prosur's launch is the institutionalization of Unasur's ideological rival, which deepened the left-right continental fault lines that are already cutting deep. As Unasur failed due to “an excess of ideology,” declared Prosur's founding presidents, the new organization would focus on defending “democracy and freedom” as part of the effort to “renew and strengthen” the South American integration cause.

The Unasur-Prosur rivalry must be understood in the long-time South American political saga of left vs. right. Two grand mechanisms affect the swinging regional political pendulum.

The first grand mechanism involves domestic political economics in countries where politicians and populations have experimented with either left or right development paths over decades, sometimes swung side to side rather abruptly and even violently.

In recent contemporary history, the 2008 financial crisis marked a critical watershed. Before that, with booming international commodities markets, the political left flourished, which in turn boosted domestic socialist agendas and made a case for regional integration. After that, the political right has come back with a vengeance, and the story continues to unfold today.

The second grand mechanism involves a disproportionately powerful external influence in the region, often to the detriment of regional solidarity and stability. The one superpower in the Western Hemisphere provides a constantly present force to either push things to the right or curtail the left from rising.

Oftentimes, American influence causes the fundamental dynamics to change the political agenda in individual countries, and sometimes in the rather ominous form of regime change.

American rhetoric and action used to and continue to blatantly sow the seeds of discord and divide amongst its southern neighbors who would happen to choose different development paths. The ongoing Venezuelan crisis, again, provides an important contemporary case about the dividing and disruptive force of American influence.

The left vs. right tug-of-war serves the South American people no good. The sorry state of Unasur-Prosur rivalry casts a dark shadow over regional unity. While the region must be allowed to independently decide how they develop their own economies and societies as well as how they choose to cooperate amongst themselves, superpower meddling in the region must come to an end.